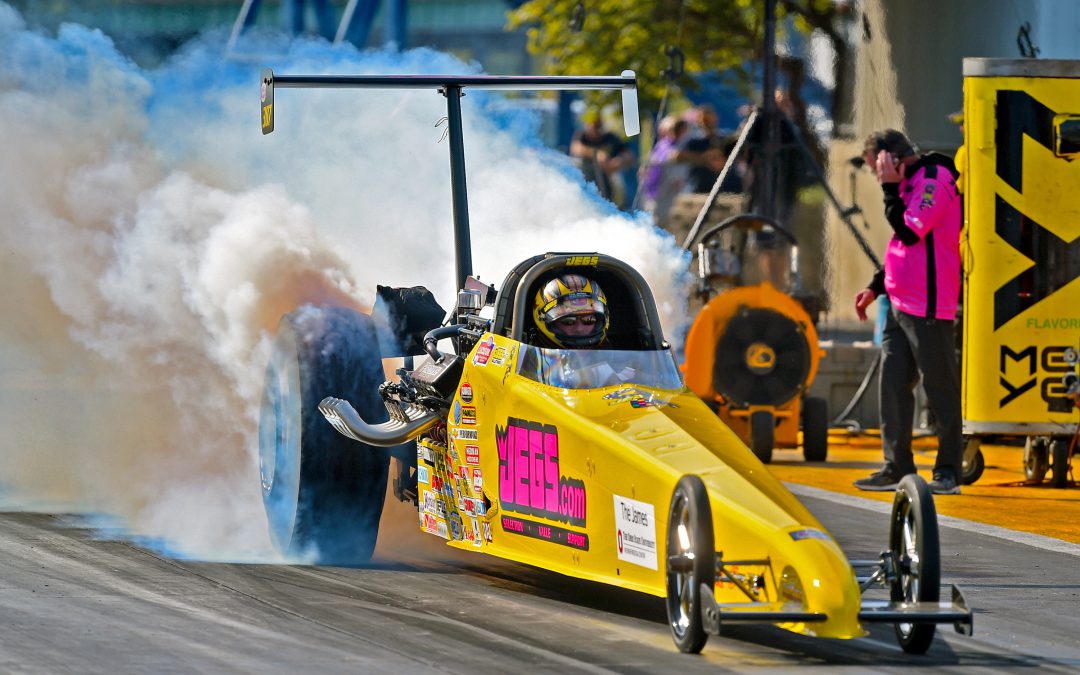 ST. LOUIS (Oct. 1) — Top Dragster championship hopeful Mike Coughlin was a man on a mission this weekend at the sixth annual AAA Insurance NHRA Midwest Nationals, knowing he needed to go multiple rounds to gain ground on the No. 1 spot both nationally and in his home division.

Coughlin raced all the way to the final round in his JEGS.com dragster before losing a close race to Danny Nelson. Depending on the outcome of other races around the country, Coughlin hopes he'll find out soon that his Sunday run pays off big for him.

"We wanted to go as many rounds as we could today to try and gain as many points as possible and we ended up making it to the final so we're pretty darn happy," Coughlin said. "We just got beat in a good close race by a good friend of mine, Danny Nelson. It was just a good race that went his way. As far as the points go, we will take a runner-up finish with big smiles on our faces. We hopefully moved up at least a couple spots in the rankings so we're looking pretty good with two races left."

A two-time Division 3 champion in the Top Sportsman class, Coughlin entered this event ranked fifth nationally, 63 points out of first. He was also third in the North Central Division, 76 points off the pace.

Opening elimination action with an easy win over a red-lighting Bob Henry, Coughlin then beat Al Peavler in Round 2 when Peavler ran under the index.

From that point forward, Coughlin was gaining points and he did so emphatically in the quarterfinals when he beat Lynn Ellison, who was ranked second nationally at the start of the weekend. Coughlin ran a 6.028 at 217.25 mph on a 6.00 index ahead of Ellison's 6.278 at 215.20 mph on a 6.23 dial.

"I felt I did a pretty good job behind the wheel and the JEGS.com dragster was unbelievable. The guys that work on our race team — Greg Cody, Dave Raurk, Ryan Micke and Tony Collier — do an unbelievably good job and they've given me such a great car to race this year. It really has been unparalleled to anything I've raced before.

"We're working with a completely different combination than we were used to but these guys have learned how to make it work and we've really turned the corner. I am proud of them and everything we have done. We are still plugging. We didn't completely win the battle today but the war rages on and we still have a great shot at taking it all."

Coughlin will enjoy two weekends off before returning to Gateway Motorsports Park Oct. 20-22 for the All-American Hot Rod Showdown, the final race on the D3 schedule.

"We come right back here to St. Louis in two weeks are not going to change a thing," Coughlin said. "We are just going to put this car back in the staging lanes and continue where we left off today."