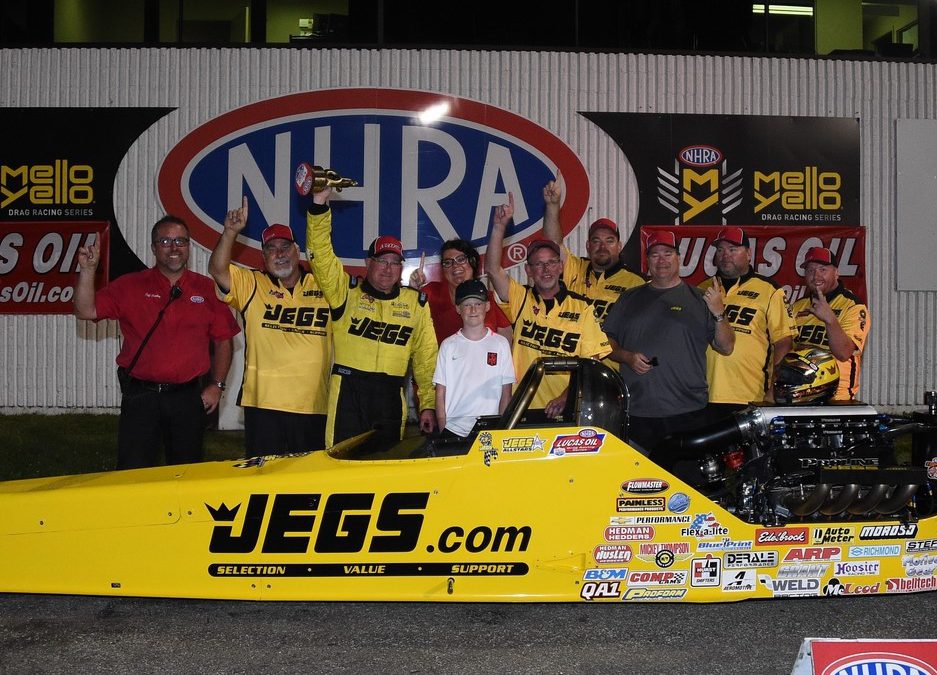 INDIANAPOLIS (Aug. 13) — The hallowed ground of Lucas Oil Raceway in Indianapolis remains a field of dreams for two-time Division 3 champion drag racer Mike Coughlin, who claimed his second win of the year and the fifth Indy victory of his career this weekend in his JEGS.com Top Dragster.

"It was finally my turn again," Coughlin said with a smile. "We opened the year in Pomona with a win at the Winternationals but as well as the car has been running since then, we hadn't been able to cash in again until this weekend. It's a big thrill and a bit of a relief, to be honest.

"I'd like to dedicate this victory to Curtis Cody. He's the brother of our longtime team member Greg Cody and he's been very sick for a while now. We're all pulling for Curtis and we want to let Greg know we're behind him 100 percent."

Coughlin's niece Paige Coughlin, one of two-time world Pro Mod champ Troy Coughlin's three daughters, had a decent weekend as well alongside her decorated uncle, racing to the second round of Super Comp in just her second start in the Lucas Oil Drag Racing Series.

Competing as the No. 1 qualifier in the resumption of the rain-postponed Ray Skillman Auto Group Spring Spectacle of Speed from late April, Coughlin simply refused to lose during eliminations, beating five of the toughest racers in the category to earn a trip to the winner's circle.

"We made up the April race all in one day and it was probably one of the craziest single days of my career," Mike said. "The guys gave me a great car, as always, and I was cutting good lights every round, but as always seems to be the case when you win, we still needed Lady Luck on our side."

After earning a first-round bye due to his top qualifying effort, Mike advanced past Al Peavler and Tom Martino when both men red-lighted at the start. That set-up a semifinal test against Shanna Snyder with a trip to the money round on the line.

"The race against Shanna was the key to the overall win," Mike said. "About 200 feet into our run the converter completely came apart. It was bad, oiling the track down and everything, which was such a shame. The saving grace was she had red-lighted because we were cooked otherwise."

With time at a premium, Team JEGS crewmen Greg Cody, Dave Raurk, Ryan Micke, Tony Collier and Justin Beaver, along with help from fellow racers Tom and Ryan Martino and Jerry and Tracy Albert, were able to replace the converter and get Mike back to the starting line just in time to beat final-round foe JB Strassweg, who came into Mike's lane during the race and was subsequently disqualified.

"He was right there and I saw his rear tire come over the center line," Mike said. "I didn't know if it was enough for him to foul out so I ran it out anyway. I was super happy and so proud of the guys for the work they did to end the day in the winner's circle.

"I would have loved to have doubled up and won the second race of the weekend but I broke out in the third round by just a hair and I was done. Still, a great weekend and I was super proud to share it with my niece Paige. It was just her second race but she's driving like she's been doing this a long time."

As a brand-new racer, Paige only was eligible to race in the Summer Shootout, the second race of the weekend, but she represented herself well, winning Round 1 Saturday night under the lights by running just .002 seconds off her dial-in. In Sunday's second round, she couldn't quite catch veteran Don Higgins at the top end.

"Big thanks to Tony Collier and Justin Beaver, who completely swapped out our transmission during time trials, because it took a lot of time and effort. Plus, Uncle Mike's guys — Greg, Dave and Ryan came over and helped. They all kept me calm and told me the car would be good and sure enough we were almost perfect in Round 1.

"This JEGS.com Super Comp dragster is such a blast to drive and I know we were looking great this weekend because they outfitted the car with pink lights, which really looked cool under the lights last night. There even a little projector light that puts the JEGS 'J' on the track. I think Dad's gonna do the same thing to his Pro Mod car."