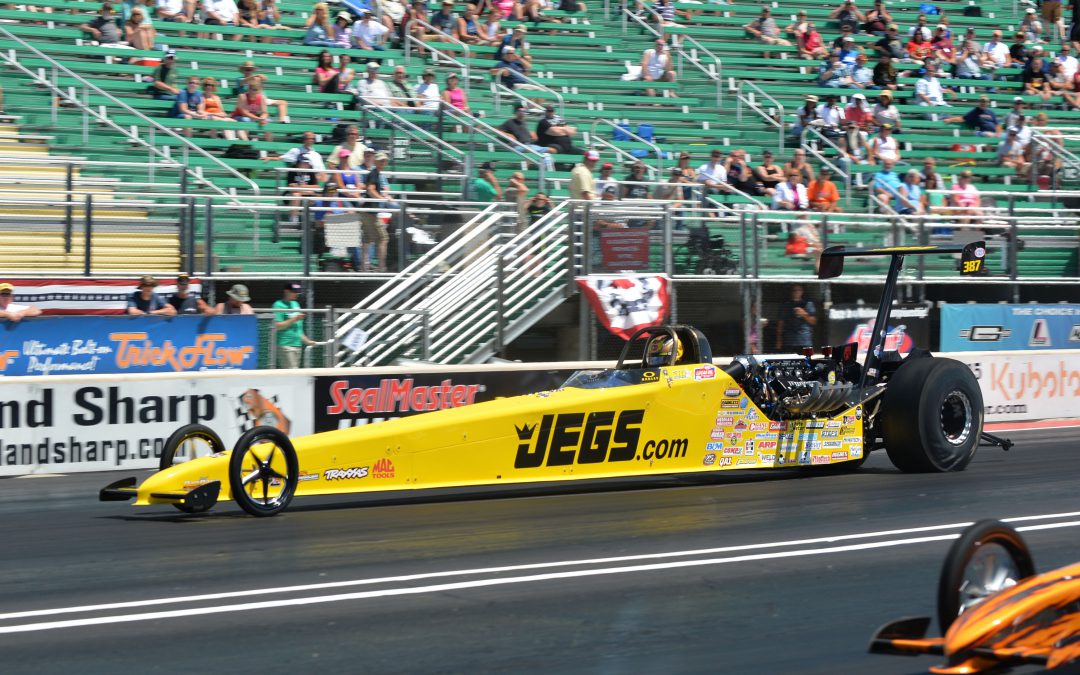 JOLIET, Ill. (July 6) – Mike Coughlin hopes to show off the progress made with his new JEGS.com Top Dragster in the K&N Route 66 NHRA Nationals this weekend at Route 66 Raceway.

Coughlin, one of four brothers who run JEGS High Performance, unveiled the new Dan Page-built dragster for the 2016 season. Crew chief Greg Cody and team members Dave Roark and Tony Collier continue to make progress with the car, and Coughlin knows progress was made in the most recent race in Norwalk, Ohio – even if it didn't show up on paper.

"We made big strides at the last race in Norwalk," Coughlin said. "We didn't turn on a whole lot of win lights, but we did learn a lot about what the car likes, what it doesn't like. We left there with it all in one piece, and we made simple changes for Chicago, so we're looking forward to trying it Thursday."

The JEGS.com dragster, powered by Pro Line Racing Engines, isn't in the special JEGS Allstars competition this weekend, but Coughlin is still pumped about seeing the top Sportsman racers in the country.

"It's pretty special for the Sportsman racer," Coughlin said. "It's the best of the best in the country, and they all get together and battle it out. It's pretty exciting stuff. I've been in the Allstars a few times. Haven't won it, but I've been runner-up a couple times, so I know how exciting it is to do that. It's a premier stage for the best Sportsman racers in the country.

"It's definitely a bonus. Being in it myself a few times, I know the excitement level of it. It helps with morale the whole weekend, so it definitely carries over."

Coughlin is part of a four-car assault from the Coughlin family, as brother Jeg is entered in Pro Stock, while nephew Troy Jr. will race in Super Comp and Super Gas. Mike's son, Clay, will also be in attendance, as will his niece, Meghan. Family is important to the Coughlins, as patriarch Jeg Coughlin Sr. started a tradition of family and racing many years ago.

"Racing with brother Jeg and Troy Jr.is always a good time," Coughlin said. "I really enjoy racing with those guys. It's a good time, a family affair."