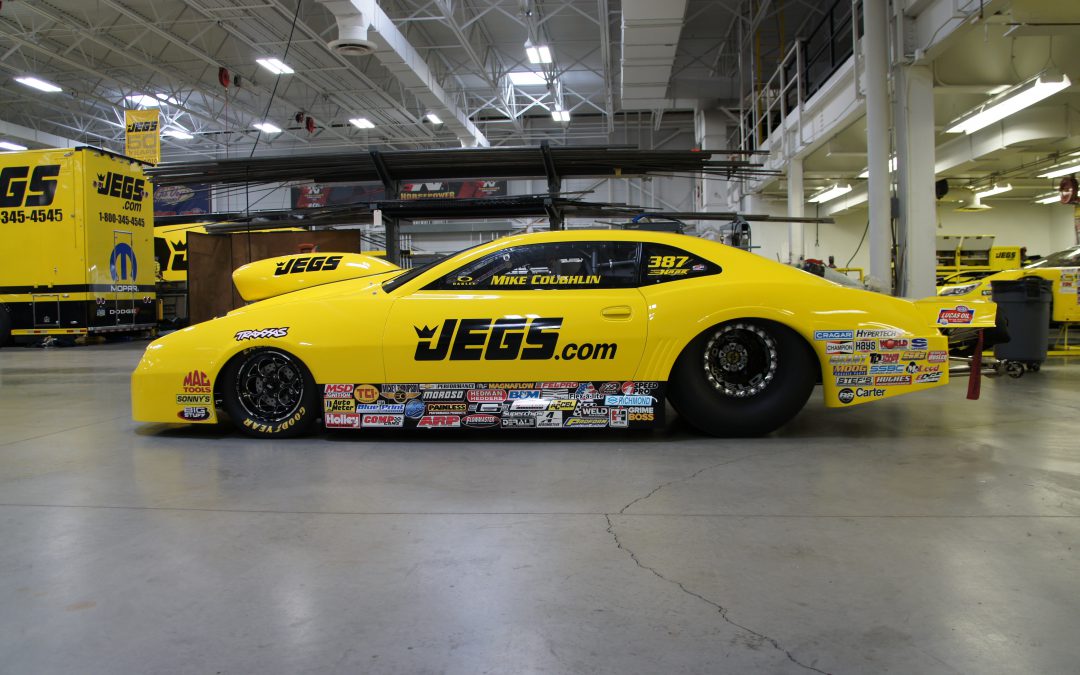 INDIANAPOLIS, Ind. (April 24) – The way that Mike Coughlin sees it, if the new JEGS.com Chevy Camaro he is set to debut this weekend is half as good as the Chevy Cobalt it is replacing, he will be very pleased.

Although the old car carried Coughlin to two North Central Division Top Sportsman championships and more than a half-dozen victories since 2006, Coughlin now realizes it’s time to make a change.

"That's how it is in racing; if you’re not moving forward you are going backward, which is why we felt that it was time to build a new car," Coughlin said. "When we first brought out the old car, we could qualify in the top two or three spots just about anywhere. Slowly, we’ve started to slip to 10th or 12th. I really hated to see the old car go, but I’m very excited to bring out the new one."

Coughlin’s new Chevy Camaro was built by Jerry Haas Race Cars in St. Louis, Mo., and as far as chassis design goes, it is similar to the Dodge Avenger his brother, Jeg Jr. races in Pro Stock. The engine is a Sonny Leonard-built "mountain motor" fitted with a John Meany-built Big Stuff fuel injection unit. Coughlin expects the car to run deep into the six-second zone at speeds of more than 210 mph.

"This car is quite a bit different from our old one," said Coughlin, who joked that the only common feature between the two vehicles was the distinctive yellow and black JEGS Mail Order paint scheme. "It’s got some unique characteristics but we were able to get a good baseline using Jeg's Pro Stock car. In fact, we already tested the new car this week at [Beech Bend Raceway Park] and I was pretty impressed. Normally, you have a few bugs that need to be worked out but this car was pretty close right off the bat."

Coughlin is a two-time winner of the Top Sportsman class at the Indianapolis Lucas Oil Series event (2008-2011) and has two U.S. Nationals Pro Stock Truck victories on his resume (1999-2001) so it’s no surprise that he lists Lucas Oil Raceway as one of his favorite tracks.

"Our whole family has had a lot of success at this track so I’m just hoping it continues this weekend," Coughlin said. "There’s always a bit of risk anytime you bring out a new race car but I’ve got a lot of help. [Crew chiefs] Greg Coty and Rick Rossiter have done a lot of work on this car, and I’ve had a lot of help from Jerry Haas and his crew, Sonny Leonard, John Meany, and of course, my dad [Jeg Sr.]. I’d love to be able to win this one for everyone that made it happen."

Joining Coughlin at the Lucas Oil Raceway opener will be his nephew, Troy Coughlin Jr., who will be racing in both Super Comp and Super Gas. Troy Jr. has come out swinging in 2013, winning the Super Gas title at the Amalie NHRA Gatornationals in March. More recently, T.J. bagged a $5,000 victory at the Top Eliminator bracket racing event at Piedmont Dragway in Greensboro, N.C. Ironically, T.J. has three national event wins to his credit but is still seeking his first Lucas Oil Series win.

Racing his JEGS.com Corvette roadster, T.J. currently is ranked 18th out of 400 Super Gas racers who have competed so far this season and has only competed in three national events and one Lucas Oil Series race. In Super Comp, Coughlin has been to just three events.

"In Division 3, our season starts a little late and ends a little early due to the cold weather so realistically we’re just getting started right now," T.J. said. "This would be a perfect time to put something together and get on a bit of a roll. I’ve been driving well and [crew chief] Jay Schroeder has both cars running great. It’s just up to me to execute the game plan."