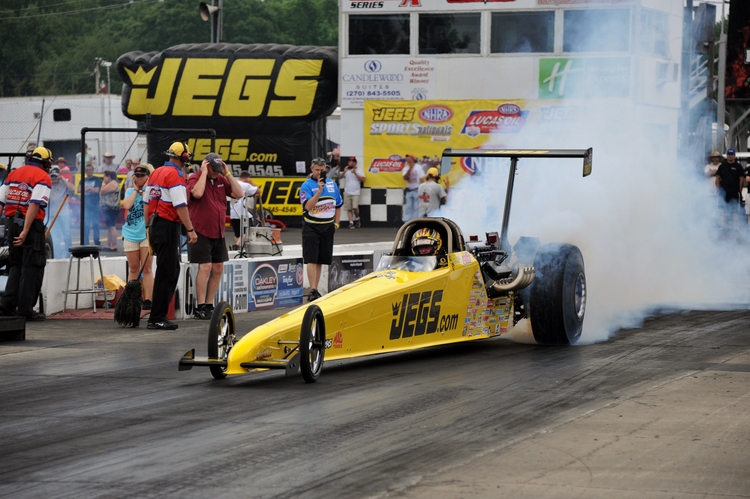 NORWALK, Ohio (June 20) – The Coughlin family will be out in full force this weekend in Norwalk.

Racing in their home state, Mike will be behind the wheel of a JEGS.com Top Dragster, while Troy Jr. is racing in Super Gas and Super Comp.

Mike Coughlin, one of four brothers who run JEGS High Performance in Delaware, Ohio, is racing a new Dan Page-built dragster in 2016 and is still dialing the car in.

"It's been running pretty good," Mike said. "We've had some ups and downs with it. As with any new program, it's got its learning curve. We're getting to the point where we're really understanding it and I'm getting comfortable driving it at the speed it's going. Every race, it gets a little better.

Mike tested the car at National Trail Raceway this week, hoping to work some of the kinks out. Still, Mike loves the new car.

"It's one of the best race cars I've ever had," Mike said. "We haven't touched the chassis setup or the shock setting since he set it up in his shop. It was a new car, a new engine, a new transmission, new fuel-injection, new power-adder, it's outstanding."

"We've had a lot of help from my dad over the years, too," Mike said. "That's always nice. And if the folks at JEGS didn't do what they do, we couldn't promote and do what we do."

Those guys – and Justin Beaver – work on Troy Jr.'s cars, too.

"We're getting everything ready to go," Troy Jr. said. "We'll sharpen our tacks and will be good to go."

Though Troy Jr. has two chances to win this weekend, he knows nothing in Sportsman racing is easy.

"It's moving mathematics at a high rate of speed," Troy Jr. said. "Everybody's got all their numbers on the right spot. Today, they cars are almost better than the timing equipment. You really have to be on your toes and focus and understand exactly what's going on with you – not so much the opponent. They don't come into play until about 1,000 feet.