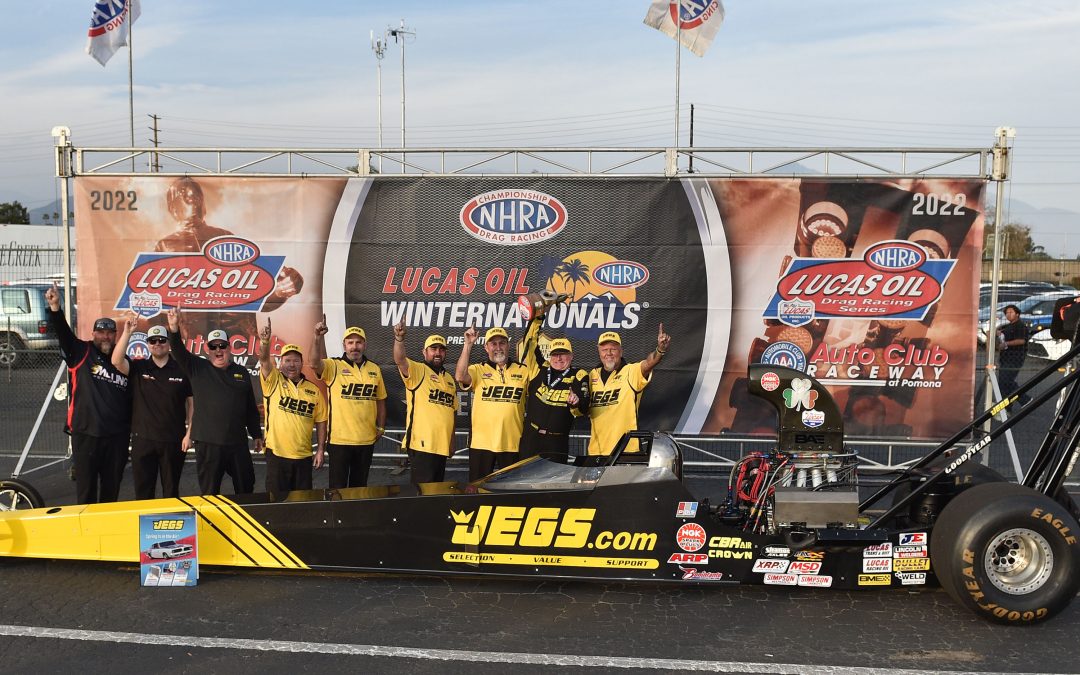 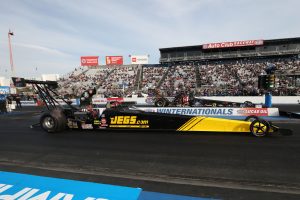 Combined with past national event victories in Top Dragster, Top Sportsman, Super Comp and Pro Stock Truck, Coughlin joins an elite group of drivers in the history of the sport to have mastered five or more categories.

“I still can’t believe it,” Coughlin said. “To be sitting here waiting for our turn in the Winner’s Circle at such an historic drag strip is just hard to grasp, especially since I still feel like I’ve got so much to learn in this class. These guys at McPhillips Racing are just so good. All the credit goes to them.” 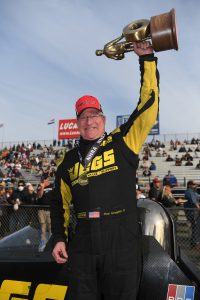 After just a pair of runs in preseason testing, Coughlin and his McPhillips Racing crew came out firing with an opening salvo of 5.233 seconds at 270.81 mph, placing the JEGS.com Dragster on the top step of the elimination ladder.

“That run ended up sticking through all three rounds of qualifying so we entered eliminations as the Number 1 qualifier, got a bye-run where we posted a really steady 5.304 at 266.37 mph that just set the tone for the day,” Coughlin said. “We just kept getting better and better and faster and faster each round. The car is a dream to drive.

“Every run I’m getting a little more comfortable as well, which helped a bunch. It’s a big change for me to go from Top Dragster to Top Alcohol Dragster. This car is so powerful and pulls super hard all the way down the track. It’s quite a thrill.” Coughlin and team really weren’t challenged too severely this weekend. After the opening bye run, they dismissed Garrett Bateman with a 5.235 at 268.01 mph to Bateman’s 5.401 at 274.39 mph, and then Madison Payne with a 5.206 at 277.26 mph to her 5.286 at 271.46 mph to reach the final. Coughlin’s 5.206 was quickest of the event.

“The final was pretty cool because my dad used to race Joey’s dad (also named Joey Severance) back in the ’70s in Pro Comp,” Coughlin said. “How’s that for some history? Beating that team in the final capped a great weekend. They are a very good operation over there but I have so much confidence in (car owners and crew chiefs) Rich and Rich Jr. (McPhillips). 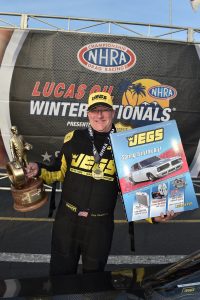 “You look at this entire team, from (crewmen) Duke Roney, Don Nolan, Darrell McComas and Tony Collier, to our teammate Jasmine Salinas and everyone on the Scrappers (Top Alcohol Dragster) team, who helped us all weekend, and it’s just an incredible group all the way around.

“I hope we get to do this a few more times this year because I’m having a blast.”

Joining the Winner’s Circle celebration was Troy Coughlin Jr., Mike’s nephew, who drives the JEGS.com Elite Motorsports Chevrolet Camaro in Pro Stock. The younger Coughlin bowed out of the race earlier in the day after losing a close race by .01 seconds.