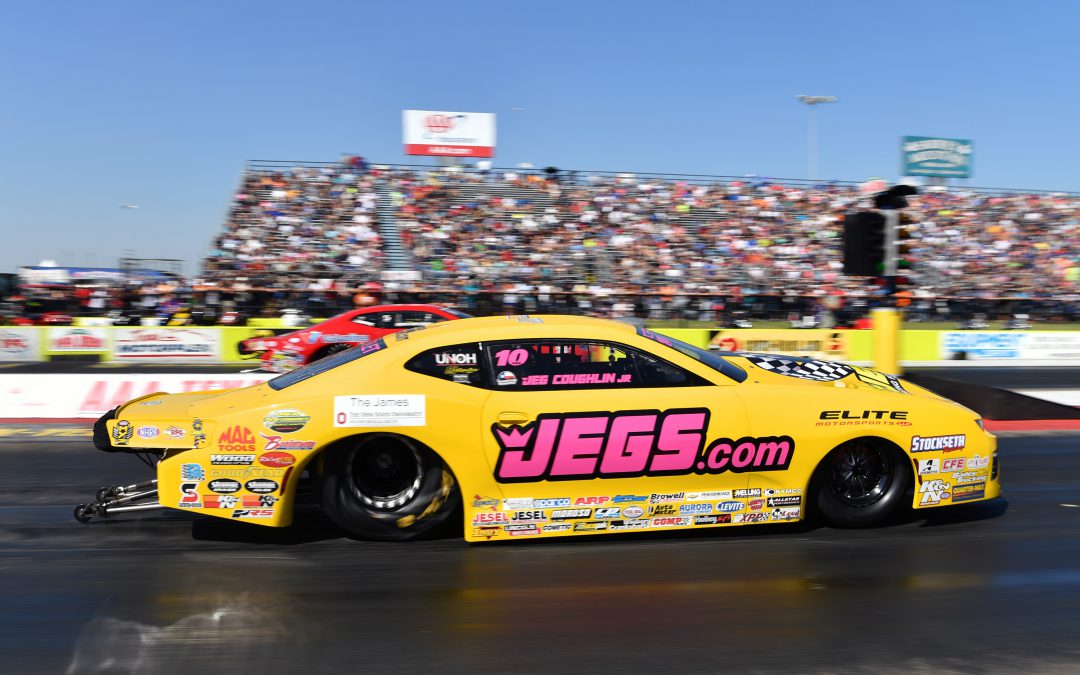 DALLAS (Oct. 15) – If the devil is truly in the details, then the misfortune that befell five-time NHRA Pro Stock world champion Jeg Coughlin Jr. and his JEGS.com/Elite Performance team Sunday in the first round of eliminations at the AAA Texas NHRA Fallnationals was certainly of demonic descent.

A loose wire foiled the chances of the Ohio native to claim the 59th career national event win of his already legendary career.

An ever-calm and pragmatic racer, Coughlin, the 47-year-old pilot of the JEGS.com Chevrolet Camaro, was clearly disappointed with today's outcome at the Texas Motorplex, but he was also quick to point out the positive aspects of his short-lived day of racing in the Lone Star State.

"We had a little misfortune," Coughlin said. "A wire came off the fuel pump relay that's mounted inside the cockpit. When that dropped off, within a few milliseconds, the fuel pump shut off. There's no fuel to the motor then and it just slammed the front end down. It happened right after I was pulling it into second gear.

"The car felt unbelievably fast down low. I was good on the tree with a .014 (seconds reaction time) and had a hundredth and a half on Drew [Skillman]. We'll never know how the outcome would have been, but I'm obviously a little disappointed. It was just an oversight. We've had that happen once before on another terminal. We put a small set screw through that terminal so it couldn't back out again and obviously we didn't do this one. It's just one of those deals where a 15-cent part ends your day."

With only two events remaining in the 2017 NHRA Mello Yello Drag Racing Series in Las Vegas and Pomona, Calif., Coughlin is encouraged by the ascent of performance his Richard Freeman-owned Elite Motorsports team has achieved recently.

"I think we had a good effort this weekend," Coughlin said. "We were in the top eight every session and that has us heading in the right direction. I felt good behind the wheel and our day just came up a little short so we'll lick our wounds and head to Vegas.

"We really want to close this season out with some round wins and maybe climb up in the standings a little bit. We have two races left. We've got to have a little redemption and hopefully a say in where we finish in the points. We'll have to wait and see how that goes."