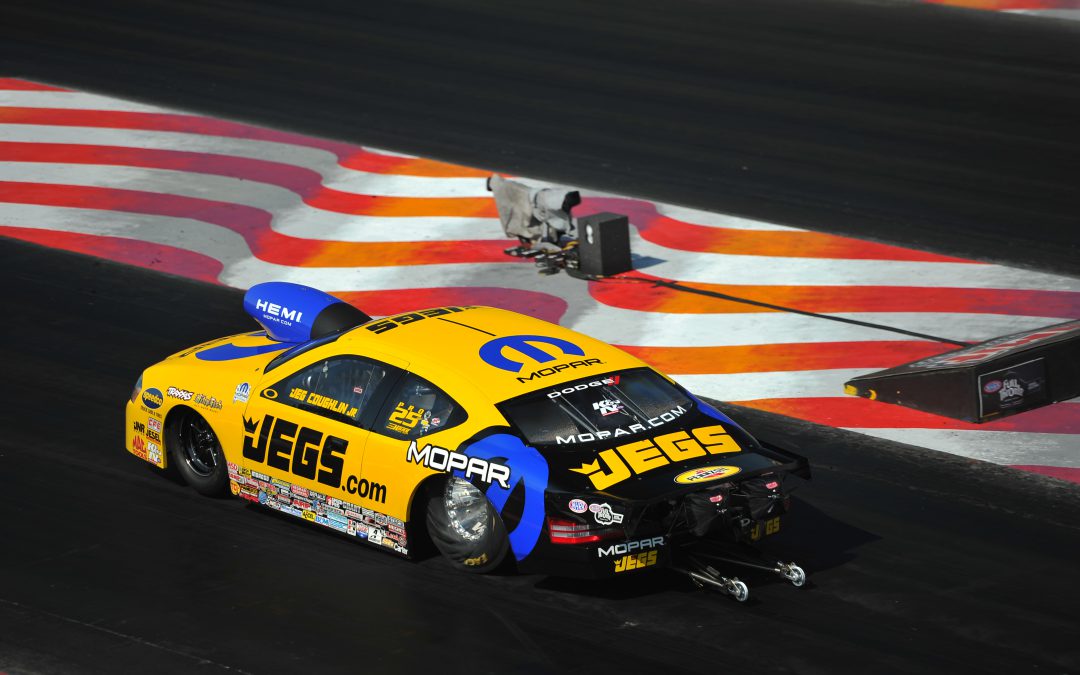 DENVER (July 18) — Five-time world champion Jeg Coughlin Jr. has always enjoyed his trips to Bandimere Speedway, racing his JEGS.com-sponsored racecars to a pair of victories on Thunder Mountain in 1998 and '99. He also relishes his yearly reunions with the Bandimere family, kindred spirits in both drag racing and philanthropic endeavors.

This year the importance of the race rises to an even higher level as Coughlin arrives in town as a big part of the Mopar team, the title sponsor of the race — the 33rd annual Mopar Mile-High NHRA Nationals.

"This could be the biggest race we've ever had in Denver," Coughlin said. "It's always a challenging event and one we've enjoyed quite a bit over the years. Now, with our association with Mopar, it becomes a race where its important to show our best side. They've done a lot for us and this new team we've put together, and we'd like to show them our thanks by doing well at their big event.

"I'm also excited to see my great friends, the Bandimeres. They've done so much for drag racing over the years and this track they've put together, with that cooling system under the starting line and those big grandstands cut into the mountain, is top rate. It's a different challenge racing in that thin air, but the Bandimeres make it enjoyable, and we love 'em for it. I've never raced there where they haven't come by and asked all of the racers if there is anything they can do to make it better. That's the mindset they have."

Aside from impressing his bosses at Mopar and hanging out with the Bandimeres, Coughlin has several racing goals in mind, not the least of which is cracking the Full Throttle Top 10. Five races from now, only the top 10 racers will be eligible for the Countdown to the Championship, the NHRA's six-race playoff, and Coughlin wants to be in the mix.

"We're only four points out of the Top 10 right now, and that could be made up in qualifying," Coughlin said. "If we can pick up a few rounds on the three guys ahead of us (Ron Krisher, Rodger Brogdon and Shane Gray) we should be able to get in there. We know it won't be easy because they want it as much as we do, but we're hopeful.

"We did test in Denver right after Norwalk so we got some good data, and the JEGS.com Avenger has been on a nice upward trend in the last few races so we're feeling good. Now all we need to do is execute."

Coughlin will actually have two chances to win in Denver as he'll also compete in the Stock Eliminator class in his JEGS Mopar Challenger Drag Pak.

Prior to the race, Coughlin will attend the Mopar Big Block Party from 6-10 p.m., Thursday, in nearby Golden, Colo. Free to the public, the event includes an autograph session with the fans, a car show and live music.

"The Mopar Big Block Party is always a great way to kick off the weekend," Coughlin said. "I welcome the chance to visit with our fans and check out the cars. With Mopar celebrating its 75th anniversary this year the party should be bigger than ever. I'm looking forward to it."

Pro Stock qualifying for the 33rd annual Mopar Mile-High NHRA Nationals begins with two sessions at 4:45 and 7:15 p.m., Friday, and continues with two more rounds at 12:45 and 3:15 p.m., Saturday. Eliminations are slated for noon, Sunday. All action will be shown on ESPN2.