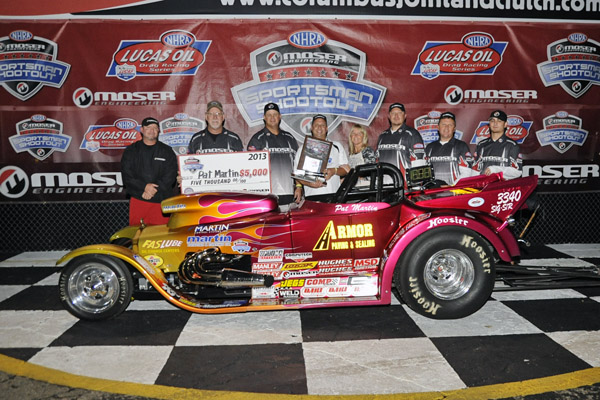 HEBRON, Ohio (Sept. 21) – The Moser Sportsman Shootout, one of many special events held during the ninth annual JEGS Northern SPORTSnationals was contested on Saturday at National Trail Raceway and Pat Martin of London, Ohio emerged the victor following a final round win over Phil Smida. Martin wheeled his ’27-T Ford roaster to a 5.814-second run on the eighth-mile course to stop Smida, the Super Gas champion at the recent Chevrolet Performance U.S. Nationals.

Martin, who earned $5,000 from Moser Engineering for the win, did not have an easy path to the final round as he had to face current championship contender Troy Coughlin Jr. past world champion Ray Connolly, and Marco Abruzzi, who made headlines earlier this year with five-straight wins in the Top Dragster and Top Sportsman classes. Smida’s route to the final includes wins against Bryan Richardson, Damien Hazelton and past SPORTSnationals champion Brad Zaskowski.

In addition to the Moser Shootout qualifying for the ninth annual JEGS Northern SPORTSnationals wrapped on Saturday at National Trail Raceway.

In Comp Eliminator class, Calvin Hill of Tamaqua, Pa. drove his ’09 Grand Am to a run of 8.306-seconds to knock Friday leader Jason Coan from the top spot. Chuck Haubiel also improved in his ’10 Cobalt to take the No. 3 spot while Rick Brown will head into eliminations as the No. 4 seed. The top nine qualifiers in Comp were able to run a half-second or more under their respective indexes, setting the stage for a very competitive race on Sunday.

The Cobra Jet Mustang factory race cars continued to assert their dominance in the Super Stock and Stock classes as they occupy the top four spots in each eliminator. In Super Stock, Kevin Skinner of Grove City, Ohio leads the large 94-car field with an 8.952 run which is 1.098-second under the SS/CA class index. Skinner is followed by fellow Ford racers Bill Skillman, Ron Matcham, and Rick Rodgers who have also each run more than one-second under their respective indexes.

On Saturday, the bump spots in the Spitzer Race Cars Top Dragster and Brodix/Steve Schmidt Engines Top Sportsman classes plummeted as racers in those to eliminators continued to make big improvements. In Top Dragster, Dan Norris of Wixom, Mich., is the leader with a 6.139 to edge Troy Stone’s 6.145 best. The 32-car bump spot in Top Dragster is a strong 6.69.

In Top Sportsman Friday qualifier Glenn Butcher of Doylestown, Ohio stepped up to a 6.533 in his ’69 Camaro to maintain the lead. Butcher holds more than a tenth of a second advantage against No. 2 qualifier Tommy Turner, who drove to a 6.653 in his Pontiac GXP.

Final eliminations for the ninth annual JEGS Northern SPORTSnationals are scheduled for 8 a.m. on Sunday, Sept. 22.