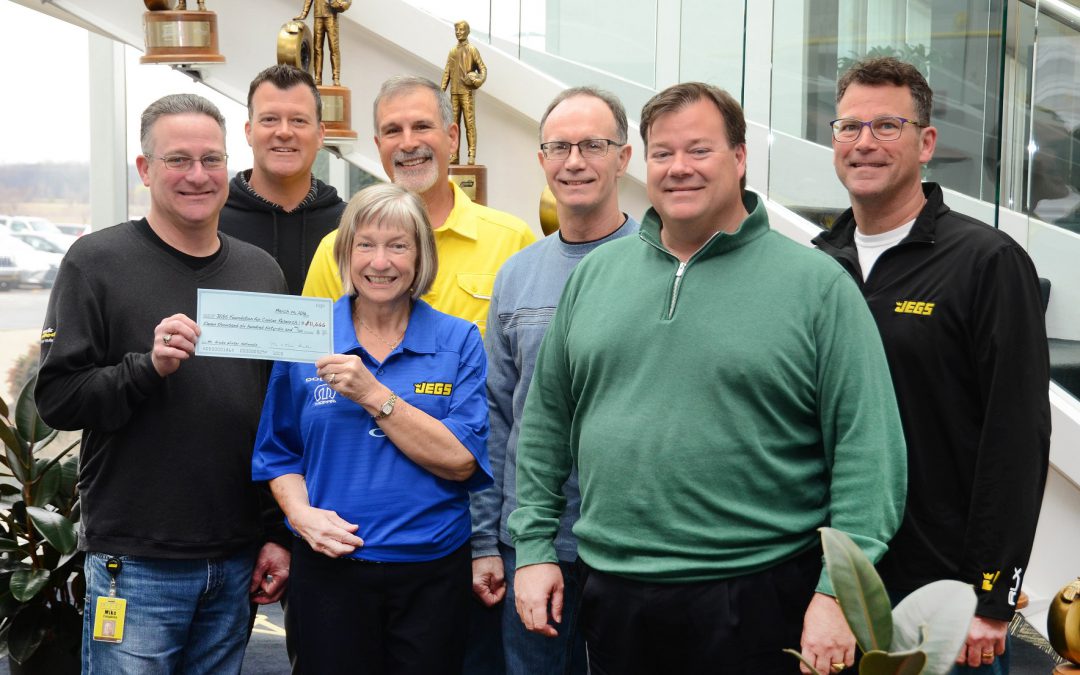 DELAWARE, Ohio (March 25) – Mr. Aruba's Winter Nationals Bench Race and Charity Challenge is further proof the drag racing community can support the needs of others while having a little fun.

JEGS vice presidents John, Troy, Mike and Jeg Coughlin Jr. accepted a check for $11,666 on behalf of the JEGS Foundation Thursday, the amount raised at this year's Mr. Aruba's Winter Nationals. In its 11-year history, the special event has now raised nearly $60,000, all for the JEGS Foundation.

Mike DeChicco and Jane Graebner (aka Mr. and Mrs. Aruba) started the event in 2006 as a way to have a little fun during the cold Ohio winters. Held at "Ostrander International Raceway" – DeChicco's basement – in Ostrander, Ohio, the Winter Nationals features special races on a practice Christmas Tree. Family, friends and fans buy into the race, with the money going to the JEGS Foundation.

"This is such a special, one-of-a-kind event, and we are truly proud to accept this donation," Coughlin said. "We sincerely thank Mike and Jane and everyone who participates in Mr. Aruba's Winter Nationals for all they do for JEGS and the JEGS Foundation. I was happy to be able to participate in the 2015 edition, and I can tell you it's great fun for a great cause."

JEGS is one of many supporters of the event, and Coughlin won the Hemi Challenge portion, donating his winnings to the money raised.

Other highlights of the Winter Nationals, held in late January, included Jason Wheatcraft winning the "Gambler's Race" and donating his record winnings of $1,048 back to the cause; Coughlin winning the Chip Faust "In It To Win It" Memorial Race and giving the $200 first prize to runner-up George Jobe, who immediately donated the money to the JEGS Foundation; and Larry Smith agreeing to sponsor the Larry Smith Construction Lane at Ostrander International Raceway.

"Thanks to all who stepped up to make this a record-breaking night," DeChicco said. "They should all be proud of what has been accomplished this year. The people that benefit from these contributions will probably never get an opportunity to thank our racers, but I know myself, Jane and Jeg all thank you from the bottom of our hearts."

The Winter Nationals unofficially began in 2005 when DeChicco and some friends gathered for beverages around a practice Christmas Tree. A year later, after learning of a friend's battle with cancer, DeChicco and Graebner decided to use the party for a bigger purpose, and the fundraiser was born.