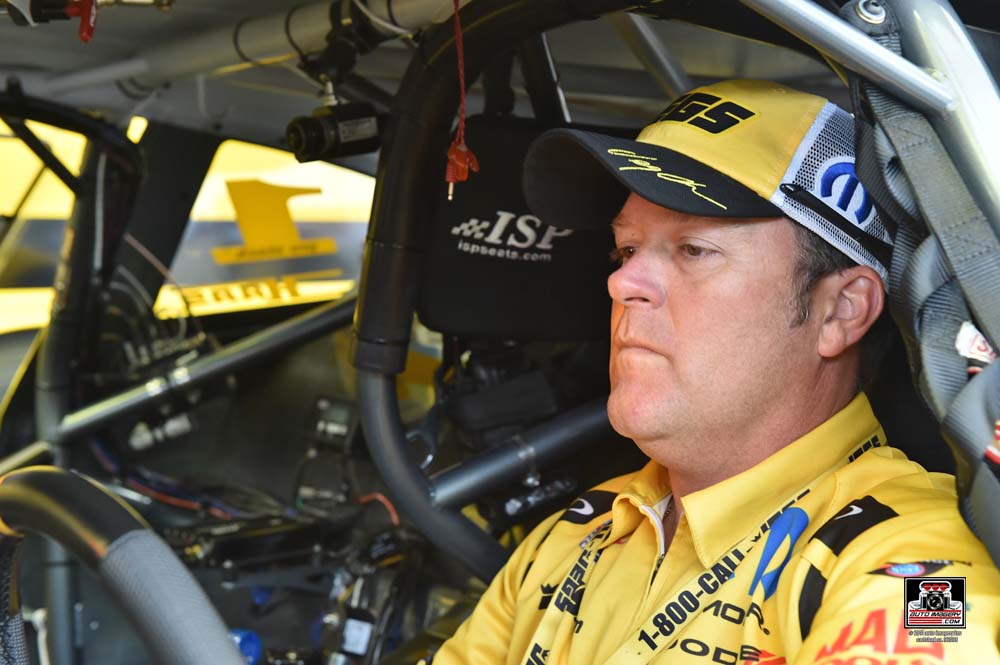 INDIANAPOLIS (Aug. 31) — Reigning Pro Stock world champion Jeg Coughlin Jr. has earned his way into the hallowed ground of Lucas Oil Raceway's winner's circle five times in the past. Now, with a car that continues to get quicker every round, he's dreaming of another gold star day at the sport's biggest event, the 60th annual U.S. Nationals.

Coughlin, who previously won three Pro Stock titles, as well as one Super Gas and one HEMI Shootout trophy at this event, has his JEGS.com/Mopar Dodge Dart on a promising streak this time through. After five rounds of qualifying he and co-crew chiefs Mark Ingersoll and Adam Hornberger have posted consecutive runs of 6.681, 6.644, 6.638, 6.635, and 6.623 seconds.

"Hopefully, we'll continue that trend," said Coughlin, who shares a pit with fellow world champion Allen Johnson. "It's been a thrash for us. Both teams have been working extremely hard on both of these cars, in particular just to get them happy again.

"We were just a little bit off-scale starting out, but we stumbled onto something good (Saturday) night with Allen's car. He posted a 6.61 in Q3, so we tried to come in that direction today with my car and ended up running the 6.63 in what actually was the final round of the Brainerd event."

Due to weather issues two weeks ago in Brainerd, a portion of Coughlin's qualifying effort in Indy actually served as the final two rounds of the rain-delayed Lucas Oil NHRA Nationals. Run during the third and fourth qualifying rounds, Coughlin closed out Brainerd as runner-up, beating Vincent Nobile with a 6.638 at 207.88 mph to Nobile's 6.715 at 207.85 mph before bowing to Jason Line with a 6.635 at 207.72 mph to Line's 6.596 at 207.40 mph.

"In the final against Jason, we looked to be on a real nice run right out of the gate, but then we just spun a little bit too much through second gear and lost a ton of momentum," Coughlin said. "If everything had gone right, we probably would've run a low 6.60, which still wouldn't have been good enough to win against Jason, but it would've helped us out in qualifying quite a bit.

"I'm used to these multi-race weekends with all the bracket racing I've done over the years. We've run two or three races in a day in those situations, and here we're just doing two races over four days, so I've got that under control. Heck, I've only made five runs. If you do well at some of these bracket races, you might make 30 runs in the course of two days."

When eliminations for the U.S. Nationals get underway at noon Monday, Coughlin will face Aaron Stanfield, who posted an eighth-best 6.621 at 208.33 mph in his professional debut.

"We've got a car that can contend and run up front, and I'm feeling pretty sporty behind the wheel, so it should be a good day for us," Coughlin said. "I can't thank both teams enough for the thrashing they've done to get us where we are right now and putting us in a position to win this race."

All elimination action will air on ESPN2.