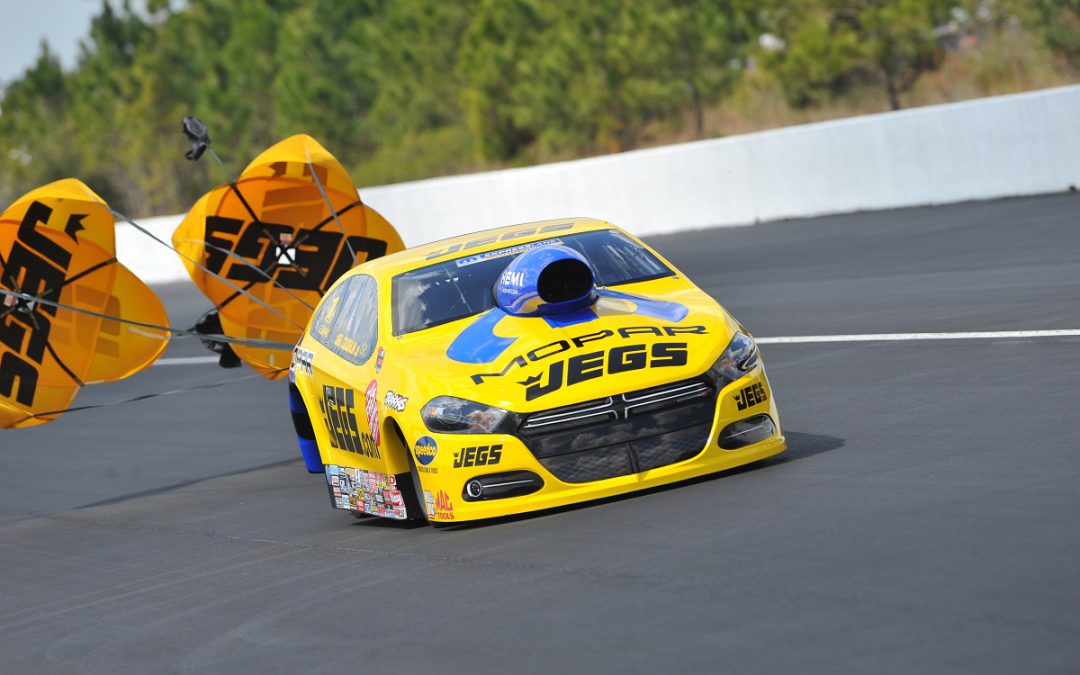 LAS VEGAS (March 24) — Good fortune is coveted in the gambling mecca of Las Vegas, but reigning world champion Pro Stock driver Jeg Coughlin Jr. is so impressed with his brand-new JEGS.com/Mopar Dodge Dart that he already feels as though he's hit the jackpot.

"I love this car," Coughlin said. "I immediately felt extremely comfortable in the driver's seat, the sight lines are better than what we had in the Avenger, and the stability at speed is great.

"We feel as though we already have the Dart at the point where the Avenger was when we won the championship last year. The difference is the upside potential is much larger. This car is a game changer."

Coughlin's first-ever quarter-mile pass in NHRA competition, which occurred at the last national event in Florida, produced a career-best elapsed time of 6.484 seconds. His second run raised his all-time top speed to 214.64 mph.

Even when temperatures rose on race day, Coughlin's new ride delivered, as did the identical Dart of teammate Allen Johnson, who went on to win the event.

"The ability to make changes with this car is another thing that's very encouraging," Coughlin said. "Allen struggled in Round 2 in his win against Shane (Gray) and the guys were able to make some last-second adjustments to our car. It made a difference and we almost got away with it but ended up losing by five-thousandths of a second.

"By the time Allen got to the next round, even though he didn't have lane choice, he was able to win because the car was perfect. That was a huge win for the team."

Coughlin is one of the most prolific Pro Stock racers in the history of The Strip at Las Vegas Motor Speedway. His five victories at Bruton Smith's masterpiece in the North Las Vegas desert is second only to Greg Anderson's seven wins.

"Any time you return to a track where you've had success there is a real level of comfort," said Coughlin, who will also race in the special K&N Horsepower Challenge for the sport's top eight Pro Stock racers. "But you can never overlook the fact that The Strip is a very strategic racetrack. You have to be very cognizant of what time of the day it is because the sun can really change the look of the Christmas Tree, even with the new LED bulbs.

"The crew also needs to monitor the conditions very closely. In the desert, you can have pretty significant fluctuations in the ambient temperatures and the track temps will change in the morning and afternoon when the shadows shift around. You need to stay on your toes.

"But with this new Dart, we have the ability to fine-tune everything to exactly what we need, so the feeling heading into this race is very optimistic. I'm ready to go."

The K&N Horsepower Challenge also will take place Saturday, with the first two rounds taking place during qualifying and the final round at 4:45 p.m.

Eliminations for the national event begin at 11 a.m., Saturday.