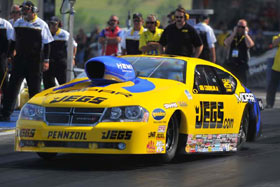 CHICAGO (June 27) — With one national event in the books since decorated crew chief Eddie Guarnaccia joined the JEGS.com race team, driver Jeg Coughlin Jr. says his optimism about the season has exponentially grown.

The month of June has been extremely busy for the Delaware, Ohio-based organization. Guarnaccia was added to the roster on June 4 at the conclusion of the national event in Englishtown, N.J. The team quickly scheduled a test session in Bristol, Tenn., which was followed by the national event at the same facility. After that, another test was conducted in Norwalk, Ohio.

“Things have been happening at a pretty brisk pace,” Coughlin said as he prepares for this weekend’s 15th annual O’Reilly Auto Parts Route 66 NHRA Nationals in Joliet, Ill. “We tested right away after hiring Eddie because there was a lot of things he wanted to get done. We got most of that stuff changed over before Bristol and then kind of expanded on it some more during the national event.

“After Bristol, Nick (Ferri) and Roy (Simmons) from JNR Racing Engines wanted to test some more things they’d been working on with the motors so we decided to head up to Norwalk. It was the obvious place for us to test this week.”

Aside from it’s proximity to Coughlin’s home and this weekend’s race in the Chicago area, Norwalk will host the next NHRA national event on July 6-8, as well as the K&N Horsepower Challenge, which runs on Saturday during the regular race.

“Norwalk was the obvious place to test, especially after we got the news that the fans voted us into the K&N Horsepower Challenge,” Coughlin said of the annual special event for the best Pro Stock racers in the class. “We didn’t earn one of the regular spots because we didn’t race last year and that deal is based on qualifying points. The only way to get in was to win the fan vote, and we were fortunate enough to do that.

“Now that we’re a part of the show, we really want to put forth our best effort, in the national event as well, because we owe that to the people that took the time to vote us into the field. We’re truly honored.”

There’s also an ongoing points race to think about as Coughlin currently sits 17 points, or slightly less than one round of elimination action, out of the 10-car Countdown to the Championship playoff field.

“Including this weekend’s race in Chicago, we’ve got seven events left before the Countdown starts,” Coughlin said. “Our goals are really simple: We want to fine-tune the car and engine combination and be as efficient as possible every pass. We’re probably not at

the same level as the top cars right now but we’re getting closer and we’ve gained even more ground these last few days in Norwalk. If we keep up our current progress, we’ll get this JEGS.com /Mopar Dodge Avenger into the top 10 without any issues.”

He’ll also revel in the chance at being a spectator to the JEGS Allstars race, which takes place Saturday. Coughlin is a former winner in the event, which invites the top Sportsman racers in the country to battle it out for big money and bragging rights.

“My brother Mike is racing this year so it’ll be even more exciting than usual,” Coughlin said. “Any time you get the best 80 Sportsman racers in the country together for a race, you can bet I’ll be there taking it all in.”