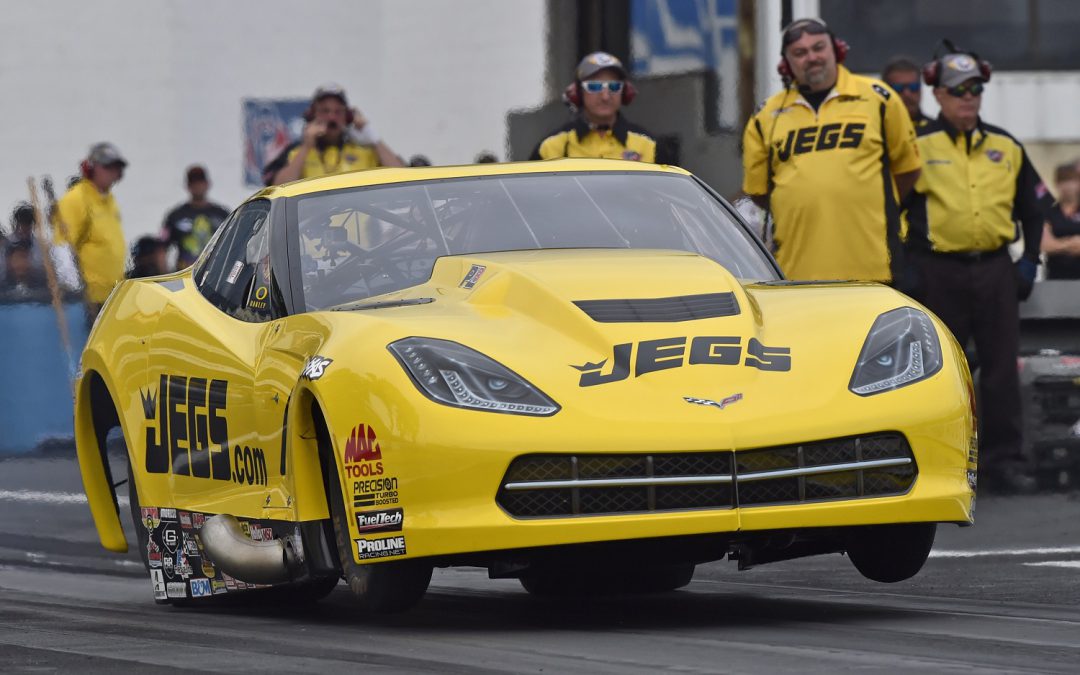 INDIANAPOLIS – Troy Coughlin has already experienced the thrill of what it is like to win the world’s most prestigious drag race, the Chevrolet Performance U.S. Nationals.

But he is more than ready to savor that moment again and for the first time racing in the NHRA J&A Service Pro Mod Drag Racing Series. Coughlin will get the chance to put the icing on top of his very successful Pro Mod career at this weekend’s 61st annual Chevrolet Performance U.S. Nationals.

The NHRA J&A Service Pro Mod Drag Racing Series will be presented by JEGS during the massive race weekend at Lucas Oil Raceway Park at Indianapolis, and Coughlin knows what a win in his turbocharged JEGS.com Chevrolet Corvette would mean.

“Well, I guess you could say it would validate the second half of my career,” said Coughlin, who won the NHRA J&A Service Pro Mod world championship in 2012. “I won the U.S. Nationals very early in my career, in 1991 in Super Gas, and that was a while back. It would be cool to come back and win it again.”

The prestigious Chevrolet Performance U.S. Nationals marks the seventh of 10 races during the 2015 season. Two-time defending world champion Rickie Smith won last year in Indy, but Coughlin finds himself in the midst of a tight battle for the Pro Mod world championship in 2015.

Troy Coughlin Sr. posted his second final round appearance of the season at the most recent race in Norwalk and even though nearly two months have passed since the last event, Coughlin still feels the two-car JEGS.com team takes plenty of momentum into the prestigious Chevrolet Performance U.S. Nationals.

"Both cars have been freshened up from bumper to bumper,” Coughlin said. “You know, this is a very tough category, like they all are, and you know all the other teams were working hard during the summer break to get better. We were too. I'm hopeful that we'll not only be able to pick up where we left off but that we'll actually pick up our performance. When Steve Petty is your crew chief, you know he never stops thinking about new ways of going faster."

A second Indy win, and his first in the NHRA J&A Service Pro Mod Drag Racing Series, would also add to the memories he already has of the biggest drag race of the year.

"No matter what, I can say we won Indy,” Coughlin said. “That's always there. I'll always remember that win. It sends chills up my spine right now just talking about it. That was the first big race any of us boys had ever won and it was just special. As a racer in one of the Super classes, it just doesn’t get any bigger than that.

"It takes a tremendous amount of focus because it's a long race. There's a lot of pressure, especially in Pro Mod because there are going to be a bunch of cars. For us, being close to Ohio and JEGS headquarters, we always have a lot of supporters over to cheer us on and there are lots of things that can distract you. It's the same for the crew guys as well. Fortunately, we have a veteran group here and we all know what to do."

With more than 30 cars again expected in the NHRA J&A Service Pro Mod Drag Racing Series class at Indy, Coughlin will face a stiff test at every turn. But a victory would do wonders for the championship chase as only three events follow the prestigious Chevrolet Performance U.S. Nationals.

Competing against a bevy of standouts, Coughlin, who has six career Pro Mod wins, knows what will be key down the stretch.

"The team that makes the fewest mistakes will be champions,” Coughlin said. “It's a fine line because with so much stout competition you know you need to constantly push the edge of performance but at the same time you want that consistency because you need to go rounds every weekend. We've got four races left, that's only 16 rounds of eliminations that you can win. Every one of them is important. There are four of us less than one round apart and another guy one round back, and two more a few rounds behind that. It's probably going to get shuffled around every race. It's going to be exciting for sure."

Featuring the world’s fastest and most unique doorslammer race cars, the NHRA J&A Service Pro Mod Drag Racing Series offers something for every kind of hot-rodding enthusiast. The growing class is highlighted by historic muscle cars, like ’67 Mustangs, ’68 Firebirds and ’69 Camaros, as well as a variety of late model American muscle cars. With more than 3,000 horsepower, the suspended door pro mod cars travel the quarter-mile in less than six seconds at speeds exceeding 250 mph.

NHRA J&A Service Pro Mod Drag Racing Series qualifying begins Friday, Sept. 4, with the first session at 6 p.m. The second and third sessions will take place Saturday, Sept. 5, at 2 and 5:30 p.m., with the final qualifying session taking place on Sunday, Sept. 6 at 10:30 a.m. The first round of eliminations is slated to start on Sunday at 2 p.m. and continue on Monday, Sept. 7.

Tickets for the world’s most prestigious drag race can be purchased by calling the NHRA Ticket Sales Center at (800) 884-NHRA (6472), or online at www.NHRATIX.com.

WHERE:   Lucas Oil Raceway at Indianapolis, Brownsburg, Ind. From I-465, exit Crawfordsville Road (Hwy. 136). Head west for four miles past downtown Clermont. The facility’s main entrance isonthe left, one-half mile past Raceway Road. From I-74 go south on Ronald Reagan Parkway, exit 68 and turn south. Turn east on U.S. 136 and entrance on the track will be on the right.

WHEN: Wednesday through Monday, Sept. 2-7

TELEVISION:  A 30-minute show from this event will be televised on the Velocity Channel in the fourth quarter of 2015.