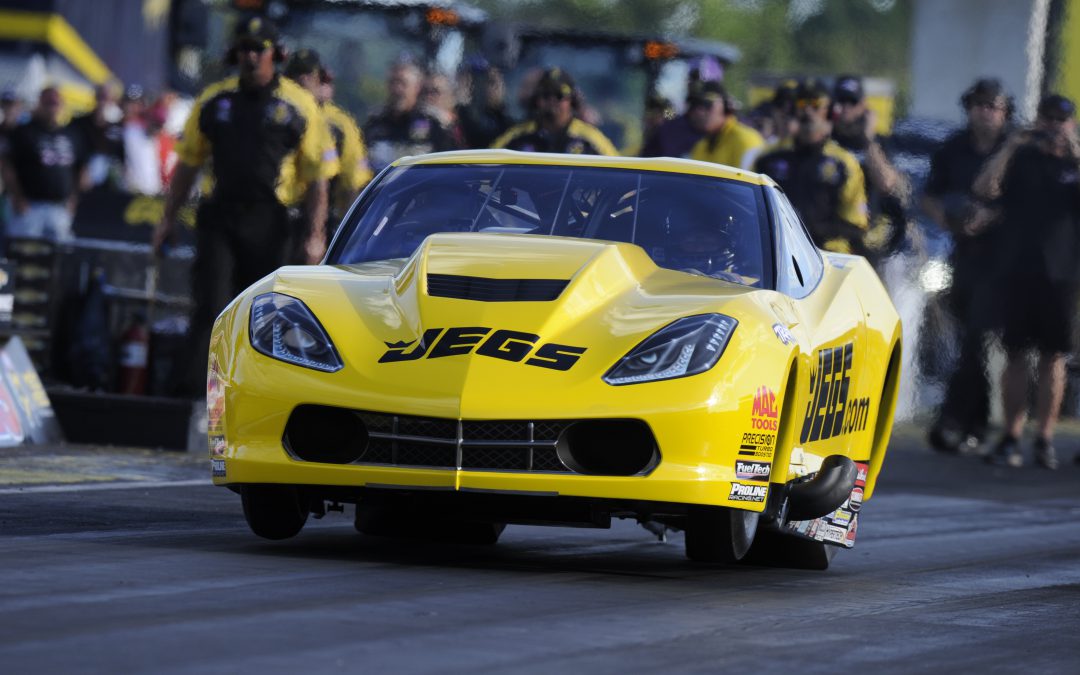 Needing to make up a considerable gap on points leader Rickie Smith this season, Coughlin hopes to dial up another thrilling finish starting this weekend at the fifth annual AAA Insurance NHRA Midwest Nationals at Gateway Motorsports Park.

Coughlin dipped to third in points after a first-round setback last weekend in Charlotte and currently sits 111 points behind two-time world champ Rickie Smith with two races remaining. It will take another incredible late-season rally from Coughlin, but that has often brought out the best in him and his JEGS Mail Order Chevrolet Corvette.

"We'll fight until the end of this thing," said Coughlin, who has seven career Pro Mod victories. "It's not over yet. Our team here does not think it's over, not until mathematically it won't work. Mathematically it still does work, so we're going to keep racing this thing as hard as we can even if we were in fifth place. We’re a championship-caliber team and we've proven it. We're making good strides.”

This weekend’s race, which is presented by Precision Turbo & Engine and will air on FOX Sports 1 (FS1) and FOX Sports 2 (FS2), is the ninth of 10 events in 2016 in the NHRA Pro Mod class. Bob Rahaim, who won last weekend in Charlotte, is sandwiched between Smith and Coughlin and sits 94 points out of first. Mike Knowles is the defending event winner.

To gain a third career world championship, Coughlin will have to recreate the scenario from 2012 and hope for a little luck in the process. That season, Coughlin won both St. Louis and the season-finale in Las Vegas to claim his first Pro Mod world title. Doing that again against a talented field of 30-plus cars will be difficult, but Coughlin knows he has a car capable of impressive results.

"We've got a hot rod,” Coughlin said. “It's a good car; it's ready to go to St. Louis. Just a little bit of cleanup and stick it back in line, as they say, and try again."

Coughlin’s second world title came last year after he moved into the points lead at the final race in Las Vegas. With two second-place finishes in between his two world titles, Coughlin is used to success and hopes to continue that run down the stretch in 2016.

He won in Englishtown and was the No. 1 qualifier and event runner-up at the Chevrolet Performance Nationals in Indy before the slip-up in Charlotte. But racing at Gateway Motorsports Park has always produced good results in his standout career, and Coughlin and his team, led by crew chief Steve Petty, have no plans of that changing.

"We've had great success in St. Louis," Coughlin said. "We won the St. Louis race (in 2012), and then we won there after the Charlotte race was rained out and finished in St. Louis (in 2014), so we've had good success there.

"The fans are awesome in St. Louis. It's a little bit closer to home than some of the farther away races and I'm excited to get there. We've got a good hot rod and the guys at Pro Line got some fantastic power with this thing."

Featuring the world’s fastest and most unique doorslammer race cars, the NHRA J&A Service Pro Mod Drag Racing Series offers something for every kind of hot-rodding enthusiast. The class is highlighted by historic muscle cars, like ’67 Mustangs, ’68 Firebirds and ’69 Camaros, as well as a variety of late model American muscle cars. With more than 3,000 horsepower, the suspended door Pro Mod cars travel the quarter-mile in less than six seconds at speeds exceeding 250 mph.

To purchase general-admission or reserved seats, call 855-RACE-TIK (722-3845). Tickets are available online at www.gatewaymsp.com.  Kids 12 and under are free in general admission areas with a paid adult. For more info, visit www.NHRA.com.