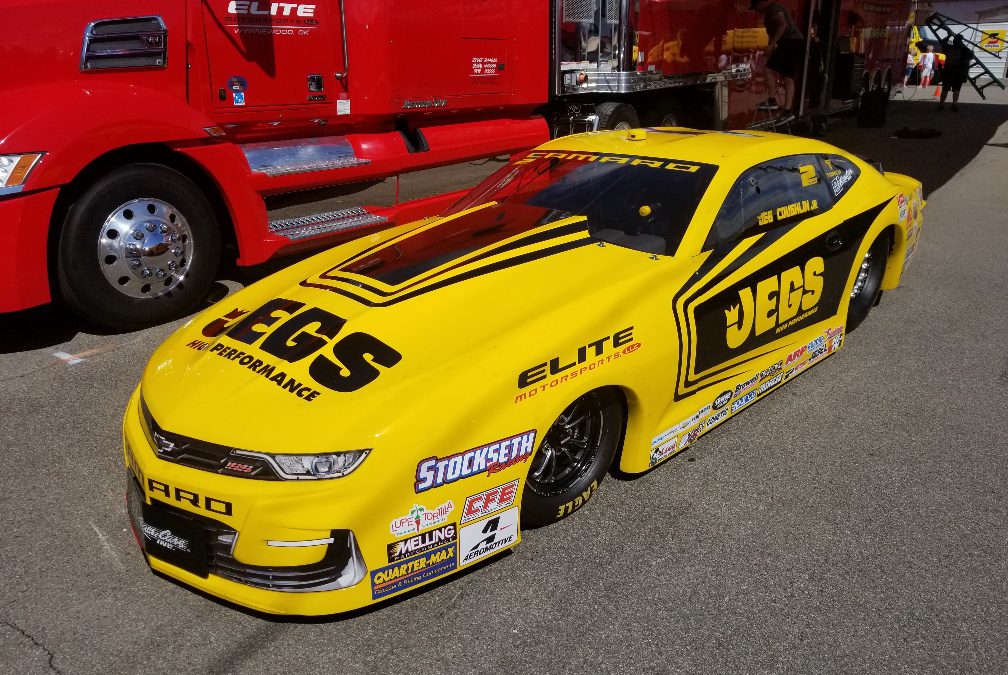 GAINESVILLE, Fla. – A brand new car and a special throwback scheme already will make this weekend a special one for Jeg Coughlin Jr. Add in a victory at the massive 50th annual AMALIE Motor Oil NHRA Gatornationals at Gainesville Raceway and it would likely mark one of the biggest NHRA Mello Yello Drag Racing Series race weekends in the five-time Pro Stock world champion’s storied career.

It all adds up to a thrilling time for Coughlin as he debuts his new 2019 JEGS.com Chevrolet Camaro at one of the biggest races of the year. Coughlin, who won the most recent race in Phoenix, will also display a special throwback scheme that his father, Jeg Coughlin Sr., ran from 1972-1975. Coming on a weekend where the NHRA celebrates the 50th anniversary of the Gatornationals with the pinnacle of the NHRA Legends Tour and the “Unfinished Business” showdown featuring eight legendary NHRA drivers in a head-to-head competition, Coughlin couldn’t be more excited.

"We'd love to break (the new car) in with a big weekend in Gainesville,” said Coughlin, who has two career Pro Stock wins at Gainesville. “Those of us on the Eastern portion of the country, there isn't much better than winning the Gators, especially when you see the names of all the former winners. (The throwback scheme) something we started working on when NHRA announced the festivities they had planned for the 50th Gators. It's fun to salute the history of this event and Dad's racing days at the same time.”

Richie Crampton (Top Fuel), Jack Beckman (Funny Car), Tanner Gray (Pro Stock) and Eddie Krawiec (Pro Stock Motorcycle) were last year’s winners of the must-see event that will be televised on FOX Sports 1, including finals coverage on Sunday, March 17 at 7:30 p.m. (ET). It is the third of 24 races in 2019 and more than 20 NHRA Legends will be on hand, with legendary drivers Don Garlits, Don Prudhomme, Shirley Muldowney, Ed McCulloch, Warren Johnson, Joe Amato, Kenny Bernstein and Terry Vance will all compete in the “Unfinished Business” race as part of the unforgettable weekend.

Despite the victory in Phoenix, Coughlin moved ahead with great anticipation to jump in the new car. It’s a sign of how much he trusts his team as Elite Motorsports, and Coughlin expects to run strong right out of the gates in Gainesville.

"This new car, obviously it's a bit different than what we've run the last nine months, is working extremely well in testing,” Coughlin said. “It's been really fast no matter what we try with it, so the brain trust here at Elite Motorsports is very excited. The car feels amazing. It fits my frame perfectly, so the comfort level is already very high. I'm extremely optimistic, with the talent we have, that we won't miss a beat."

Coughlin knows he’ll have to pick up right where he left off in Phoenix to grab a third career Pro Stock victory at the Gatornationals. Pomona winner Bo Butner is the current points leader in the class, while Coughlin sits in fifth behind teammates Matt Hartford and Erica Enders, as well as Jason Line, who has four Gainesville wins. Greg Anderson also has four event victories, meaning Coughlin will have his work cut out for him. But after last year’s second-place finish, the veteran has championship hopes in 2019.

“The season is young and we’ve got a lot of racing left, but we’re really looking forward to the rest of the year,” said Coughlin, who has 62 career wins. “We would love to put that No. 1 on the side of the car at the end of the year, but there’s a lot of season left.”

Richie Crampton is after another Top Fuel wins in a class that includes standouts like defending champ Steve Torrence, Brittany Force and Antron Brown.

Pro Stock Motorcycle makes its annual debut at Gainesville, as defending world champ Matt Smith will look to keep Eddie Krawiec from his fourth straight win at the event. Others to watch include Hector Arana Jr., Scotty Pollacheck and Andrew Hines.

As always, fans can interact with their favorite drivers with an exclusive pit pass to the most powerful and sensory-filled motorsports attraction on the planet. This unique opportunity gives fans direct access to the teams, allowing them to see firsthand the highly-skilled mechanics service their hot rods between rounds, and get autographs from their favorite NHRA drivers.

Mello Yello Drag Racing Series qualifying will feature two rounds at 1:15 and 5:00 p.m. on Friday and the final two rounds of qualifying on Saturday at 12:00 and 3:30 p.m. Final eliminations are scheduled for 11 a.m. on Sunday.