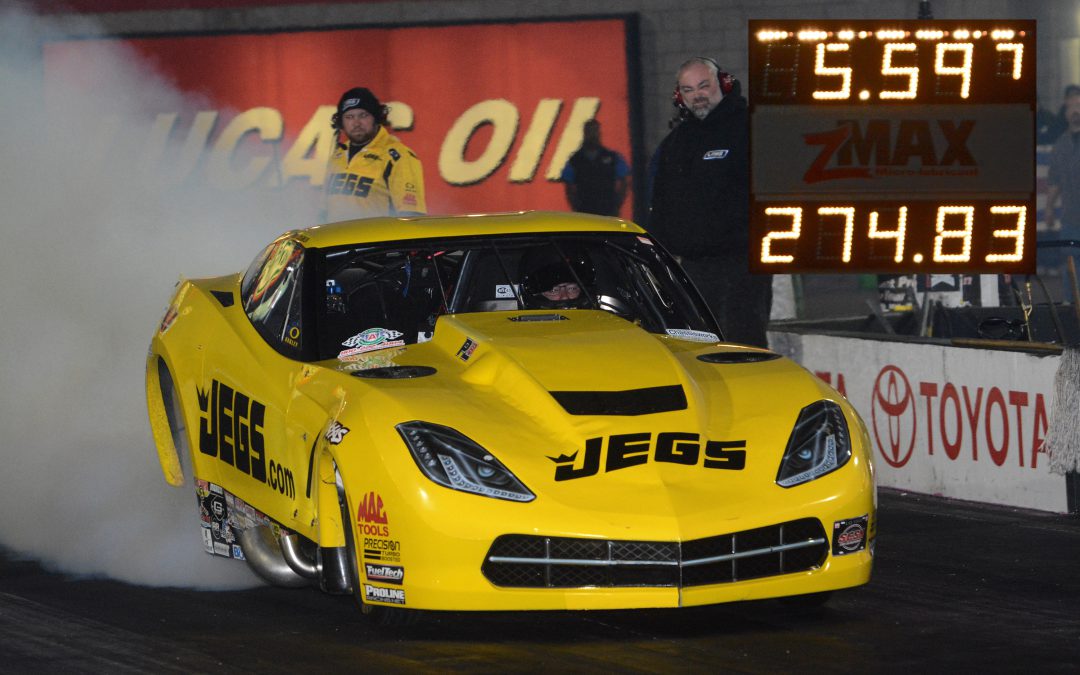 "Las Vegas has been very, very good to us," Coughlin said. "I should pick up gambling because we always seem to do well in this town. On second thought, I'll save all my good fortune for the drag strip. That's much more enjoyable for me.

"We had about a perfect weekend out there, and more importantly we had a bunch of fun with all the other drivers. The pressure of the NHRA title fight was gone and then you add in a bunch of the Outlaw guys taking their best shots and it was just a fun race to win."

Competing in the Outlaw Pro Mod category, Coughlin started the weekend with the quickest and fastest pass of opening day action, winning the cash prize of the "Quickest Pass Challenge" with a stout 5.686 at 268.38 mph.

"That deal was awesome," Coughlin said. "You could take all the weight out of your car and just go for it. It was a no-holds-barred, lets-see-how-fast-you-are kind of a deal. Everyone was welcome to give it a shot and we came out on top, so that was cool."

Then somehow in regular qualifying, racing back under the posted rules and proper weight requirements, Coughlin managed to improve, reaching an otherworldly 274.83 mph top speed during a 5.597-second pass, the fastest doorslammer run in recorded history.

"It never stopped pulling," Coughlin said. "My son Troy Jr. is licensing in a Top Fuel car and said that's the same sensation as a dragster; that it just keeps pulling and pulling. That was probably the most fun I've ever had in a racecar. Taking the speed record back from the Aussies was a bonus."

"The final was just like the last pass I made at The Strip in the NHRA race," Coughlin said. "The car lifted the front end up and just held it there, which caused me to head towards the center line. I had to completely lift to get it to settle down and then got back on it and this beast still went 5.68 at 273 mph. It's just an animal.

"It was a great weekend for the entire JEGS.com team, especially at a race that JEGS sponsors. Troy Jr. went four round and reached the semifinals in Pro Mod and we won Outlaw Pro Mod so it definitely brought some attention to JEGS and our free same-day shipping and handling."

"Forget about me; my Dad is a badass," Troy Jr. said. "We did well in Pro Mod but he crushed Outlaw. Wow, I still get chills when I think about the 274 he ran. That's in a door car. It's just incredible what the guys are doing with that car.

"It was a great weekend for JEGS and we are very appreciative of everyone who raced and came out to watch. I think we put on a great show and hopefully everyone will go to JEGS.com and do their Christmas shopping. Dad made it pretty obvious we have the best high-performance parts in the business."