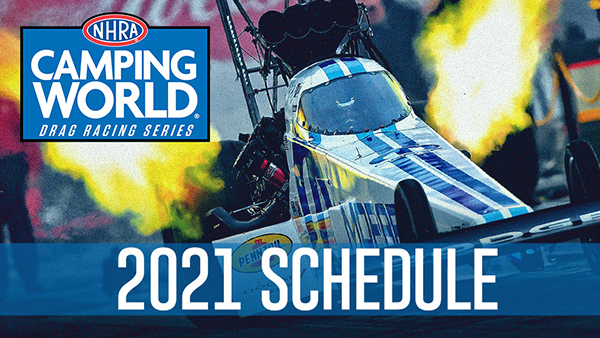 NHRA enters 2021 with a new sponsor on its premier professional series – Camping World, the nation’s largest retailer of recreational vehicles (RVs), RV accessories, and RV-related services – and an extended partnership with FOX Sports including amped-up coverage. All 22 events in this extreme sport series will be aired exclusively on FOX Sports with select events on the FOX broadcast network.

In 2021 NHRA will celebrate its 70th anniversary. Fans will experience special treats and features along the tour to commemorate this important milestone and honor the NHRA’s vast history.

“We are grateful to the loyal NHRA fans and other members of the racing community who have stuck with us during the trying times of the 2020 season,” said NHRA President Glen Cromwell. “We’re looking forward to an exciting season of championship drag racing with fans in 2021. Thank you to our fans, racers, track operators, and partners for your continued support and cooperation.”

For the first time, the NHRA season will kick off on the east coast with the 52nd annual AMALIE Motor Oil Gatornationals at Gainesville Raceway on March 12-14.

The traditional series opener, the 61st annual Lucas Oil NHRA Winternationals at Auto Club Raceway at Pomona, will move to April 9-11 in 2021, starting a unique three-week spring stretch on the West Coast. The Winternationals will be followed by the DENSO Spark Plugs NHRA Four-Wide Nationals in Las Vegas, the first of two four-wide events during the 2021 campaign, and the NHRA Arizona Nationals in Phoenix, April 23-25.

The sport’s biggest race, the historic NHRA U.S. Nationals, will stay in its traditional place over Labor Day Weekend, Sept. 1-5, at Lucas Oil Raceway at Indianapolis.

NHRA’s Countdown to the Championship playoff system, with the top 10 racers in each professional category competing for a championship over the final six races, will lead into the 2021 season finale, the 56th annual Auto Club NHRA Finals slated for November 12-14 at Auto Club Raceway in Pomona, Calif.

One facility, Route 66 Raceway in Chicago, is not holding any drag racing events at its facility in 2021, so it is not included on the schedule.

Fans are encouraged to check NHRA.com/tickets for updates on future ticket purchases.