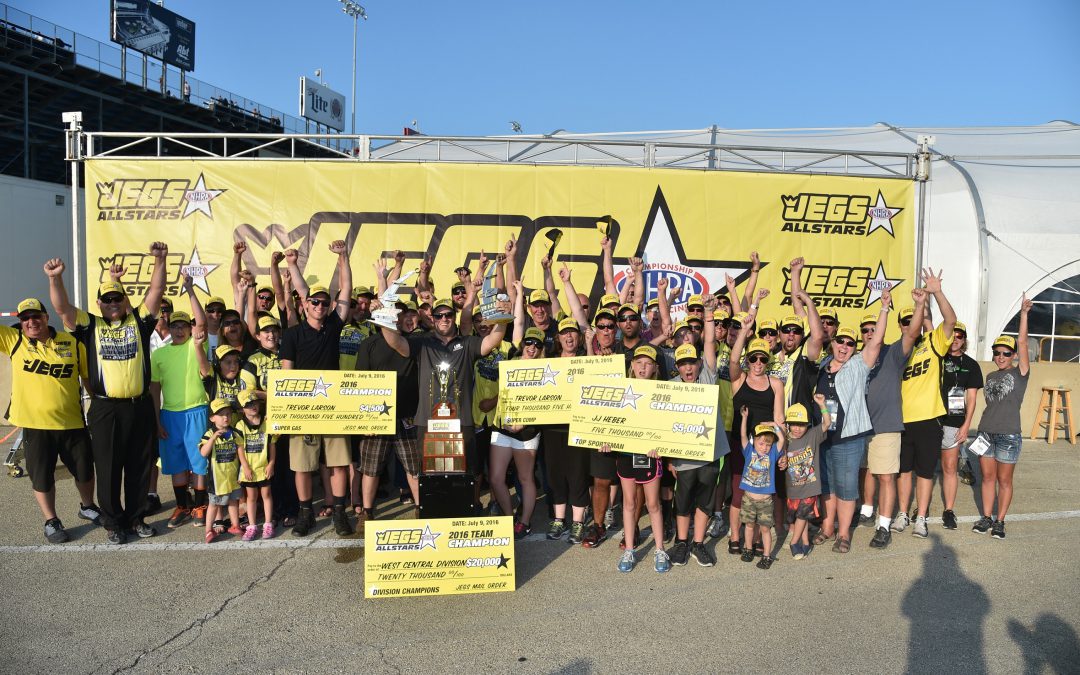 JOLIET, Ill. (July 4) – This weekend, the focus of the drag racing world will be on NHRA Sportsman drivers as the 33rd annual JEGS Allstars race takes center stage during the Fallen Patriots NHRA Route 66 Nationals at Route 66 Raceway.

The JEGS Allstars competition is a unique event that crowns individual champions in 10 separate eliminators, in addition to an overall team champion. A highlight of each season for a third of a century, the JEGS Allstars event features a total purse of more than $120,000 plus an additional $50,000 in manufacturer’s contingency postings, making it one of the richest events of its kind.

For the 80 racers who have qualified for the special event, winning an individual title at the JEGS Allstars race is a tremendous achievement, but being a part of the winning overall team is an unmatched accomplishment. No one knows that better than Trevor Larson of Starbuck, Minn., who last year became the first driver to double-up at the JEGS Allstars with wins in Super Comp and Super Gas. Larson’s achievement helped his squad from the West Central Division claim overall team honors for the second time in the last three years.

In addition to a share of the six-figure jackpot, every qualifier and the 10 individual champions will be awarded a handcrafted trophy made by master sculptor Dan Dreisbach of Naked Sculpture. Additionally, the team members of the winning division will have their names inscribed on the perpetual JEGS Allstars team trophy.

This year’s JEGS Allstars event will feature a field of 77 competitors representing 27 U.S. states and three Canadian provinces. There are also eight former or current NHRA national champions in the field.

When NHRA announced four years ago that Top Alcohol competition would be divided among four regions rather than the traditional seven divisions, JEGS immediately devised a plan to keep the popular cars in the Allstars competition. As a result, Top Alcohol teams will compete for a special "regional" trophy, also designed by renowned artist Dreisbach.

The Alcohol fields are stacked with the likes of past national champions Severance and Chris Demke, as well as Megan Meyer and Mia Tedesco, two of the three female drivers in the field.

The Division 2 team will pin their hopes on Steven Furr, who is the rep in Super Gas and Top Dragster, as well as Jenny Treadwell (Comp), Jeff Longhany (Stock), and Matt Weston (Super Street).

The South Central Division team is always solid and this year is no exception since it includes national champ Austin Williams, five-time JEGS Allstars winner Slate Cummings (Super Stock), and young gun Aaron Stanfield, who is pulling double-duty racing in Top Dragster and as the Super Stock blocker.

The team from the Northwest Division has not won the overall title since 2005 but that could change this season thanks to a talented crew that includes 2016 Comp runner-up Bryan Hyerstay, former national champion Brad Burton (Stock), and defending event winner Mick Alley.

The gang from the Pacific Division, who claimed the 2012 overall title, will be looking to regain the top spot and there is no reason to think they won’t be able to reign supreme with a core group that includes consistent winners Doug Lambeck (Comp), Kyle Rizzoli (Super Stock), Tibor Kadar (Stock), and Kenneth Mostowich (Super Gas).