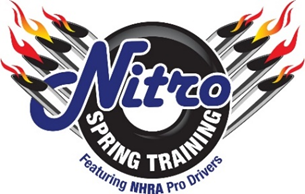 PHOENIX, AZ — The stars of the NHRA Camping World Drag Racing Series will begin preparing for their pursuits of Top Fuel, Funny Car and Pro Stock world championships from Wild Horse Pass Motorsports Park outside of Phoenix, Arizona, during the PRO Nitro Spring Training test session slated for February 10-12. The testing sessions hosted by the Professional Racing Organization will be closed to the public except for Saturday, February 12, when fans who have purchased tickets to the NHRA Arizona Nationals will have the opportunity to purchase tickets for the on-track testing action. Fans may add on test session tickets to their Arizona Nationals ticket order online or they may call the NHRA Ticket Sales Center at 800-884-6472 if Nationals tickets have been previously purchased.

Almost 30 drivers from more than a dozen of the top professional NHRA teams, including nine current or former world champions, will be testing many with brand new race cars and new sponsors.

“We are glad to bring the Nitro Spring Training event to Phoenix and Wild Horse Pass Motorsports Park,” said Alan Johnson, the president of PRO. “This is an exciting time of the year when teams are getting ready for a new season. There were a lot of changes to many teams this off-season so getting drivers and cars as many passes as possible will be critical. We are looking forward to a great 2022 NHRA season and this pre-season testing session is the first chance for us to show off for our fans.”

Among those heading to Arizona are reigning Funny Car champion Ron Capps as well as the entire contingent of Kalitta Motorsports including Doug Kalitta and Shawn Langdon in Top Fuel and J.R. Todd in his brand-new Toyota GR Supra Funny Car.  John Force Racing will be represented by 16-time champion John Force, three-time champion Robert Hight and 2017 Top Fuel champion Brittany Force. Tony Stewart Racing drivers Matt Hagan and Top Fuel teammate Leah Pruett will be getting geared up for 2022.

Gates will open at 8:00 a.m. and teams will make runs throughout the day. There will not be a set schedule for runs and the last runs of the day will begin at approximately 5:00 p.m. Most drivers are planning on making at least one run on Saturday, however due to the nature of testing there are no guarantees on driver participation. For additional information visit https://racewildhorse.com/.