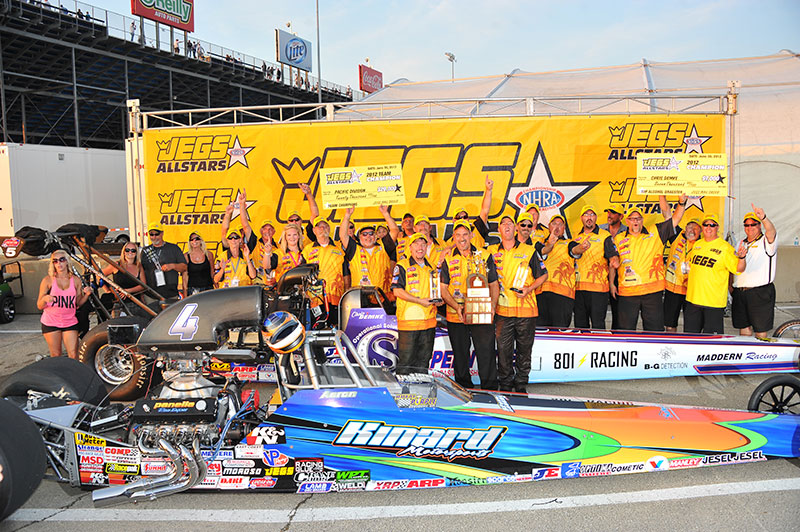 JOLIET, Ill. (June 24) – For the 29th consecutive season, the stars of the NHRA Lucas Oil Drag Racing Series will be making the trek to Route 66 Raceway for this weekend's JEGS Allstars competition.

This year’s field features 78 drivers representing 30 U.S. States and two Canadian Provinces. They will compete for individual and team honors and a share of the more than $120,000 at stake during the event, which will once again be held in conjunction with the O’Reilly Auto Parts NHRA Route 66. Nationals.

In 2012, the team from the NHRA Pacific Division finally broke through for their first overall team title after a dramatic runner-up finish in 2011. Led by Top Alcohol Dragster winner Chris Demke and Super Comp champion Aaron Kinard, the Pacific Division team scored 1,300 points, finishing in a tie with the Southeast Division 2 team. Per tie-breaker rules, which award bonus points for wins and runner-up finishes, the Division 7 team was declared the winner.

When NHRA announced last season that Top Alcohol competition would be divided among four regions rather than the traditional seven divisions, JEGS immediately devised a plan to keep the popular cars in the Allstars competition. As a result, Top Alcohol teams will compete for a special regional trophy designed by renowned artist and sculptor Dan Dreisbach of Naked Sculpture.

The Northeast Division team is the all-time leader in the event with seven championships and they will be looking to add to that with a team anchored by world champions Frank Aragona Jr. (Comp), Joe Santangelo (Super Stock), and Al Kenny (Super Comp) as well as current Super Gas points leader Mike Sawyer.

Sherman Adcock Jr. will once again be the cornerstone of a very competitive Southeast Division 2 team as he competes for titles in both Super Comp and Super Gas. Adcock will have plenty of support from teammates Glen Treadwell (Comp),. Robbie Shaw (Stock), and multi-time Division champion Jeffrey Barker (Top Sportsman). The Southeast Division team has a long history of success in the JEGS Allstars competition, having won six overall titles.

The host team from the North Central Division 3 also boasts a bonafide ringer in the form of four-time NHRA champion Jeff Taylor, who will be competing in Stock. The team is also strong in the Top Sportsman and Top Dragster classes with John Scali Jr. and James Monroe as representatives. The Division 3 team has also enjoyed a lot of success in the JEGS Allstars race, winning six overall titles, most recently in 2009.

The South Central Division 4 team always is a solid group and this year is no exception as it includes reigning Super Gas world champion Jeff Lopez, Jody Simoneaux (Stock), and Austin Williams (Super Comp). Slate Cummings also figures to pull his share of the load as the Super Stock representative and a blocker in Stock.

Amazingly, the West Central Division 5 team has never won the JEGS Allstars overall title but they have the manpower to do so this year as their impressive line-up includes Super Street ace Steve Domingues, Top Dragster racer Phil Unruh, and rising Stock Eliminator star Nick Seibert as well as two-time Comp champ Bruno Massel, who is the blocker.

The team from the Northwest Division 6 has a lot to prove after scoring just 300 points in last year’s competition. A repeat would be almost unthinkable as the 2013 team includes world champs Jackie Alley (Super Stock), and Brad Burton (Stock) as well as successful Comp racer Adam Bowdish. Historically, the Northwest Division has won two overall JEGS Allstars titles (1988 and 2005).

The squad from the Pacific Division 7 is looking to defend their long-awaited title and this year’s line-up offers a great chance for them to achieve that goal. Leo Glasbrenner, who finished No. 2 in the 2012 Stock standings, will be making his first Allstars appearance and he will be joined by Mike DePalma (Comp), Matt Constant (Super Comp), and Mike Blodgett (Super Street).

While the JEGS Allstars is a highlight competitive event, camaraderie between racers and their crews is evident, especially during Friday evening’s racer appreciation barbecue which is open to all of the JEGS Allstars competitors, their families and crews.