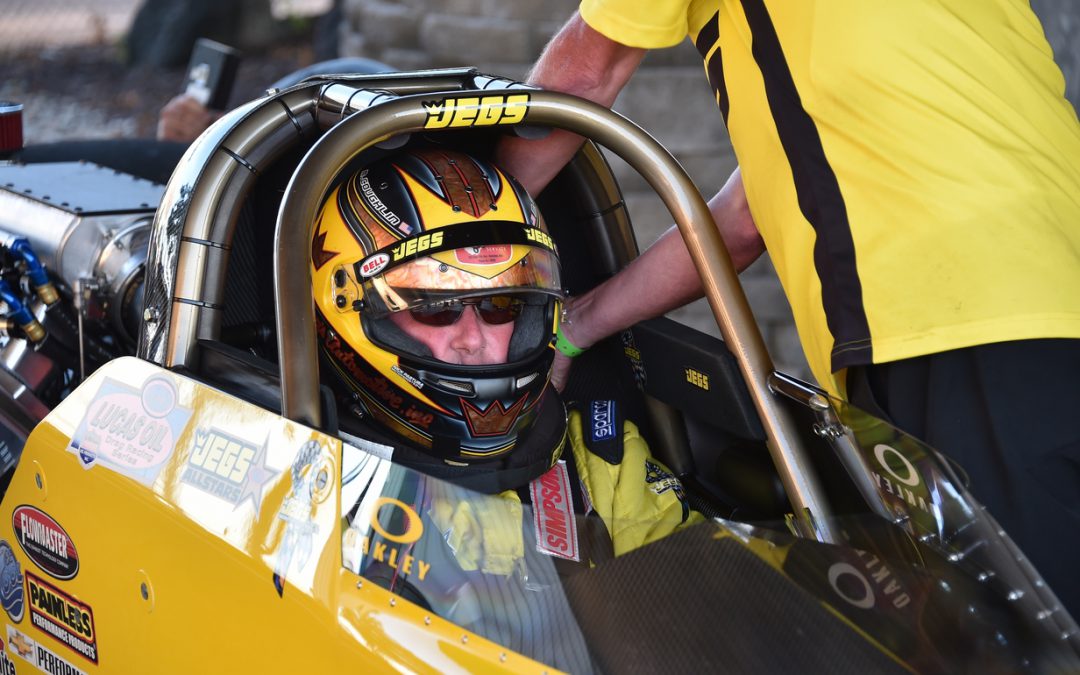 CHARLOTTE (Sept. 13) — Two-time Division 3 champion Mike Coughlin of the famed Coughlin drag racing family cannot wait to get to zMax Dragway this weekend for the ninth annual NHRA Carolina Nationals and just have some fun.

After several years in the Top Sportsman category, Coughlin decided to make the switch to Top Dragster in the off season and he's spent the year adapting to the faster class, including many long weekends where he and the JEGS crew were simply trying to figure out how to run their rail.

"We've definitely had an up and down year with this new Top Dragster project and we're not in any title hunt so this is just going to be a fun weekend racing with my brothers Troy and Jeg and my sister-in-law Samantha," Coughlin said. "My son Clay also is coming to Charlotte for the first time also so I can't wait to show him zMax Dragway and what a four-lane drag strip looks like.

"This JEGS.com dragster is a ball to drive when it's running properly. I just need more seat time now. I really haven't been able to concentrate on driving because we've been working on getting it to run properly. But we are confident we're in a good place now with the tune-up and we are ready to run.

"We are now officially in race mode, and that's exciting."

Although he finds himself in the unusual position of not fighting for a championship himself, the perennial title contender still may revel in a title celebration before the year is through, something that has him beaming with pride.

"Clay is leading the points in his class at our home track of National Trail Raceway in Columbus so that's been really exciting for us," Coughlin said. "Hopefully he closes out the season as strong as he's been to date and he gets the big trophy at the end of the year. That would be exciting.

"My wife Kriss and I are also very proud of our other son Jack, who is now a sophomore in high school and doing really well on the golf team. In fact, he was going to come to Charlotte with us but he has a tournament back home so I'll be keeping up with him through Kriss."

As for his own racing, Coughlin is feeling confidence for the first time this year.

"We haven't raced since the St. Louis points meet (Aug. 5-6) but the car was really coming around there so we didn't need to do much to prepare for this race, just regular maintenance really," he said. "We're just going to pull it out of the trailer and run it as is.

"Either way, this will be the last race of the year so it's a good time to once again thank my crew, Tony Collier, Greg Cody, Dave Raurk, as well as my brothers, my dad, everyone at Pro Line Racing Engines, and all our JEGS associates who support us. It's been a fun year."