No Practice, First Truck Race & Plenty of Learning for Coughlin in NASCAR Debut 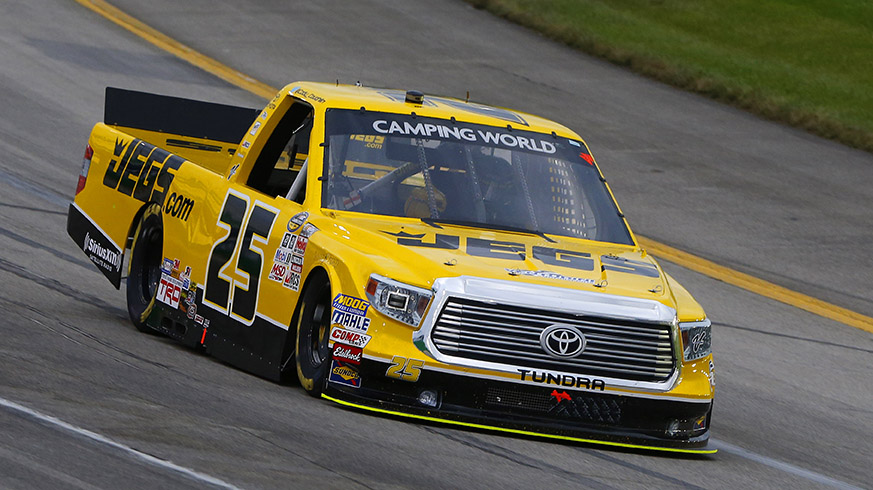 Due to that fact, the field was lined up according to series owners points which relegated the 19 year-old to start 30th in his Venturini Motorsports prepared Toyota Tundra.

Despite not ever having turned a competitive lap in a NASCAR Truck, Coughlin marched as high as 16th midway through the race.  A bad vibration, which forced a late race pitstop, and an ill-handling truck resulted in a 20th place finish in the UNOH 225 for the young, up-and-coming racer.

“It’s certainly not what we wanted out of today, but I definitely learned a lot from everything,” said Coughlin, of Delaware, Ohio.  “It was my first experience with the series and our truck was a little evil at times during the race.  The team worked hard to fix it, but it would not turn off the corner.  Next time we race in the series we will be much better; I am confident of that.”

Coughlin had tons of support from his JEGS Performance family on hand to cheer him on in Kentucky, including Todd Iden and his wife, Terie, as well as Bart Apple and his wife, Gigi.  Cody’s family of John (dad), Di (mom) and Kennedi (sister) joined the Team JEGS support staff of Kevin Hamlin (Team Manager), Scott Wimmer (spotter) and Dave Holt (crew-member) at the mile-and-a-half speedway.