No wins, but JEGS team enjoys great outing at SPORTSnationals 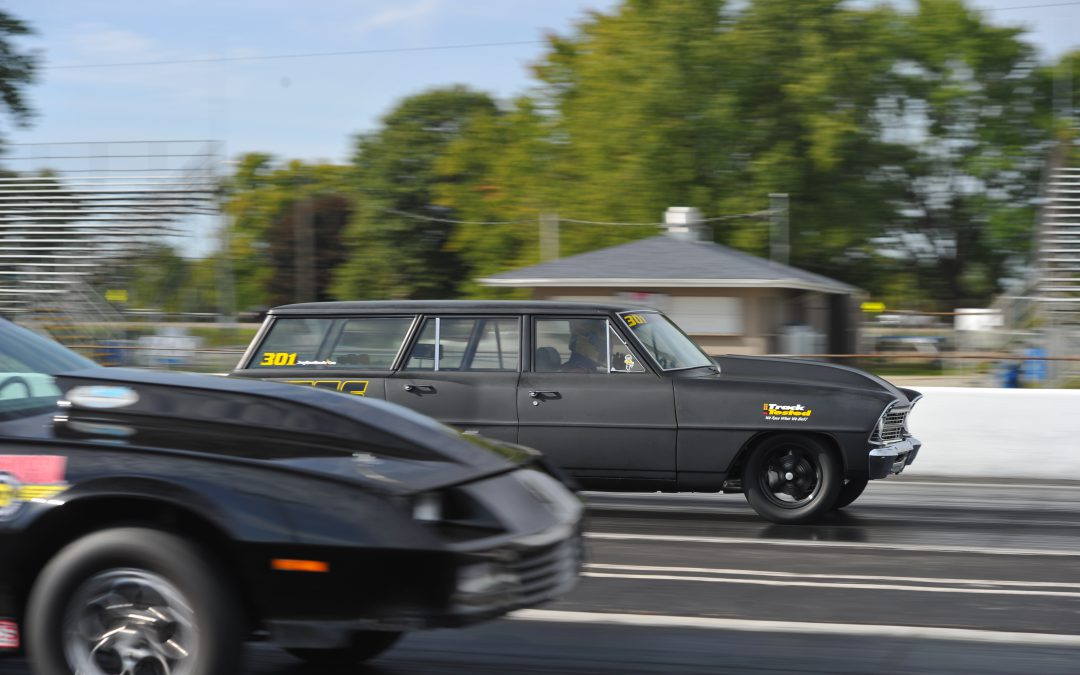 HEBRON, Ohio (Sept. 24) – It was a short day for the JEGS Mail Order team at this weekend’s JEGS Northern SPORTSnationals at National Trail Raceway but each of the Coughlin family racers agreed that the event was a big success.

The star of the show for the yellow-and-black team was John Coughlin, who made a surprise appearance behind the wheel of his brother Jeg’s Chevy II station wagon. Racing for the first time this season, John drove the classic Chevy to a fourth round finish in the tough Super Street category.

"About a week ago I decided to come to this race, and Jeg agreed to let me drive his Chevy II," John said. "My wife, Diana, and our daughter, Kennedi, were off on a mother-daughter weekend so my son, Cody, and I decided to have a father-son weekend at the drag strip.

"Cody and I have been spending a lot of time on his circle track career but he had the weekend off so it worked out perfectly. I got to spend some quality time with the family and see a lot of the friends I haven’t seen all year. It would have been nice to win a few more rounds but overall, I had a great time.

"It was also a lot of fun to get behind the wheel of a race car again. I lost a race that I could have won but that’s my fault because I didn’t hit the brakes soon enough. I did manage to go to the fourth round and a lot of the credit for that goes to my brother Jeg. He was racing (Pro Stock) in Dallas but we were on the phone all weekend. He gave me a lot of great advice and helped me through each round."

Mike Coughlin also stayed busy in Columbus as he raced his Chevy Cobalt in the Top Sportsman class and also worked with his sons, Jack and Clay, as they raced in Sunday’s Jr. Dragster program. Mike ultimately turned in a Round 2 finish. Meanwhile, Jack and Clay enjoyed the experience of racing at a big-league event.

"It was a really good event," Mike said. "We had a transmission issue with my car and it bit us pretty hard. We tried to take the old-school approach and race off the footbrake, and that worked for the first round, but in the second round I needed more than that. It was kind of fun because it was a different way to race but it’s also disappointing because now I know I can’t win the championship. The best I can do is second place. That’s a bummer but overall it’s not a bad year.

“My boys also had a blast racing their Jr. Dragsters and it was great having the whole family there for our home event. I really love the JEGS Cajun SPORTSnationals in Belle Rose, Louisiana, but this race is not far behind that. They’re both awesome events."

Third-generation racer Troy Jr., red-lighted in the second round of Super Comp in his JEGS.com dragster and then drove to a third-round finish in the team’s Super Gas Corvette. Troy Jr., who was a finalist at last year’s JEGS Northern SPORTSnationals, lost the Super Gas round to his girlfriend, Mia Tedesco, who went on to post a runner-up finish.

"If I had to lose to someone, I’m glad it was Mia," Troy Jr. said. "We had a good race. I had her a little bit off the starting line but couldn’t hold the lead. I really just did a bad job of driving. Everyone was joking that I let her win but of course that’s not the case. She’s plenty good on her own and this time, she just happened to do a better job than I did."