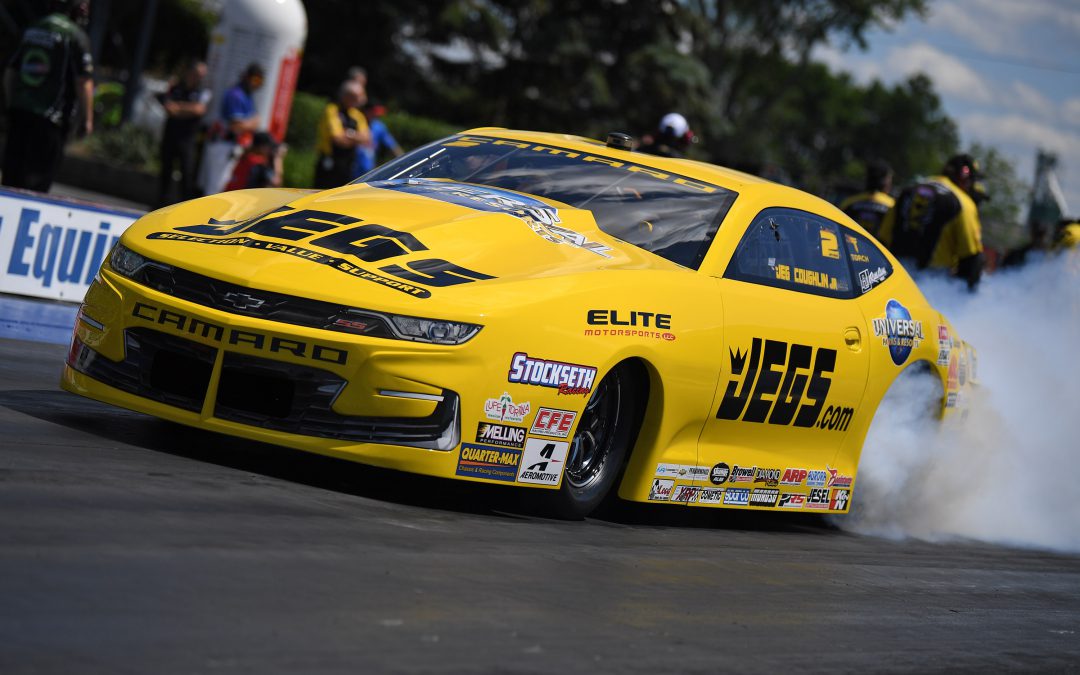 NORWALK, Ohio (June 22) — Slightly more than an hour from his home in Delaware, Ohio, six-time world champion Jeg Coughlin Jr. is enjoying a good deal of support at this weekend's NHRA race in Northwest Ohio. Now, after qualifying mid-pack, the 81-time national event winner is hoping to bring home another Pro Stock win for his loyal fan base.

"There's nothing better than racing in Ohio and seeing all the yellow and black up in the grandstands and all over the pits," Coughlin said. "So many people have been gracious enough to wish us good luck and it's fun to roll through the pits and here all the 'JEGS' cheers. We sure hope we can give these folks something to cheer about tomorrow."

Coughlin's JEGS.com Elite Motorsports Chevrolet Camaro has been extremely steady through Pro Stock qualifying, running four passes within .024 seconds of one another. His best run came in Round 2 on Friday evening when he posted a 6.572 at 209.92 mph.

"The car has been really consistent, although we haven't made a run yet where it's been completely happy," Coughlin said. "Still, but it's been decent enough to keep us in the hunt, so we're happy. In the end, the top 10-11 cars wound up being separated by a hundredth and a half (of a second) so we're in line."

Because he qualified eighth on the grid, Coughlin will open eliminations against No. 9 qualifier Erica Enders, the two-time world champ who happens to be his teammate at Elite Motorsports. Enders was just an eyelash behind Coughlin in qualifying with a 6.573 at 207.18 mph.

"We start off with that two-time champ over there across the pit," Coughlin said. "Obviously, we know better than anyone what they're capable of and we already know we'll have our work cut out for us. It'll be a test right from the start but that's what we're here for.

"The track is supposed to be warmer tomorrow but I'm confident the guys will have it set to go. We've had a pretty good car in qualifying and it should be good tomorrow."

Pro Stock eliminations begin at noon Sunday. As the 8-9 qualifiers, it's likely Coughlin and Enders will be the first pair to run in the Pro Stock class.