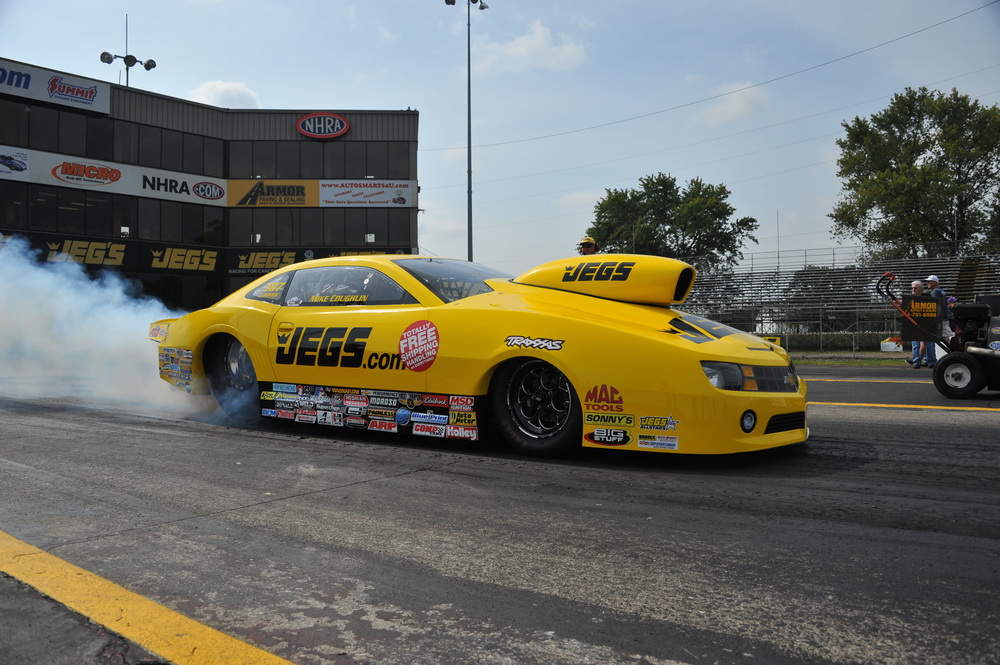 HEBRON, Ohio (Sept. 21) — With more than a dozen world titles and 100-plus victories, it's hard to find something the drag racing Coughlin family hasn't accomplished, and yet Mike Coughlin had a chance to pull off a rare home-state double this weekend at the JEGS NHRA Northern SPORTSnationals at National Trail Raceway. Unfortunately, it wasn't meant to be as the Norwalk winner of two months ago couldn't find the winner's circle in Hebron despite his best efforts.

"We tried," Coughlin said. "The JEGS.com Camaro is just not where we want it to be consistency-wise at the moment and it bit us here at National Trail. It's a bummer because it would have been neat to win two national events in Ohio with all of our friends and family there, but it wasn't meant to be this time.

"The car is perfect on one run and does everything we ask of it and then one round later it does something different. I think we're just running a little too much of an aggressive tune-up at the moment. We need to back it down and make a bunch more A-to-B runs to get back that consistency we had before."

"We qualified well and ran great in round one but turned right around and lost in the second round," Coughlin said. "The car went out and shook a little bit and I couldn't get it to go straight. Still, it ran really well and it was a close race at the finish line but we missed out.

"There's a race coming up in Norwalk in a few weeks, and we'll test a bunch before then and go there to see how it runs. We just need to harness this power and make it stick and we'll be fine."

Across the pit, the three Jr. Dragsters belonging to Coughlin family members had good results. Paige Coughlin, the daughter of Pro Mod world champion Troy Coughlin, reached the final round before settling for runner-up honors. She beat Mike's son Clay along the way in round two. Her sister Kelly also bowed out in round two.

"It was a lot of fun having the kids here and they did great," Mike said.