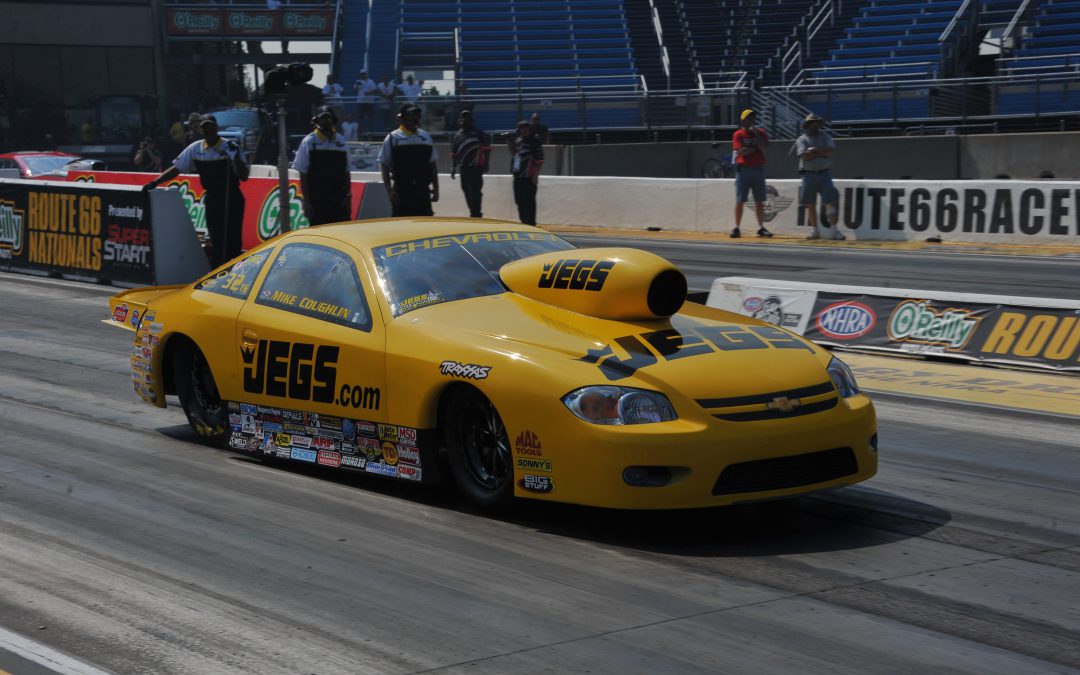 HEBRON, Ohio (Sept. 19) – With six entries spread out over four different eliminators, the odds are strong that this weekend’s JEGS Northern SPORTSnationals at National Trail Raceway will feature something special by a member of the Coughlin family.

Anchoring the yellow and black attack will be the 200-mph Chevy Cobalt of two-time Top Sportsman champion Mike Coughlin. Mike will be joined by his nephew, Troy Jr., who will pull double duty in Super Comp and Super Gas. The remaining three JEGS.com entries will be in the special Jr. Dragster class and will feature Mike’s sons, Jack, 11, and Clay, 8, along with their cousin, Makenna Brown, 12.

"This is going to be a busy weekend in many ways," Mike said. "National Trail Raceway is our home track and every time we race here it’s a big deal. I’m really excited for our whole team and our whole family. We’re going to have a lot of support at this event and it would be awesome if one or more of us could deliver a win on Sunday."

Mike hasn’t raced since the Lucas Oil Drag Racing Series event at National Trail Raceway in late July, so he’s rested and ready to go as he continues his pursuit of a third North Central Division Top Sportsman title.

"The last time I raced, we had no issues at all," Mike said. "My car ran flawlessly so I think we’re ready to go this weekend. I haven’t had the best season but we’re not out of it by any means. In 2009, I had to come from behind at the last three races and there’s no reason to think that couldn’t happen again. The key is that I have to do well here.

"Thankfully, I have a great crew in Greg Cody and Tony Collier. They are both excellent at what they do and they make my job as a driver so much easier. It’s also great to have my wife, Kriss, and my sons, Jack and Clay, here with us. Now, it’s all on me to go out and make it happen."

Mike has a long history of success at National Trail Raceway, including three Top Sportsman wins at the JEGS Northern SPORTSnationals in 2006, 2007 and 2009. He also won the Super Comp title at the NHRA Spring Nationals, which were previously held at his home track, in 2002 and 2003.

Troy Jr. is also raring to go after driving his JEGS.com dragster to a solid semifinal finish in Super Comp at the recent Mac Tools U.S. Nationals, an event he won in 2010. A year ago, Troy Jr., drove to a runner-up finish in the Super Comp class at the JEGS Northern SPORTSnationals and he’s looking to win one more round this time around.

"I’m racing in Super Comp and Super Gas this time but the goal is still the same; I want to win," Troy Jr. said. "It was a fun to get close to a win at Indy and the experience was good for me. I haven’t raced much in Super Comp this year but I was very comfortable. I also love driving our JEGS.com Super Gas Corvette. That car is a lot of fun."

The third-generation of Coughlin racers will be highly visible during Sunday’s Jr. Dragster race as Jack and Clay Coughlin and Makenna Brown will pose a triple-threat in their matching JEGS.com Jr. Dragsters.