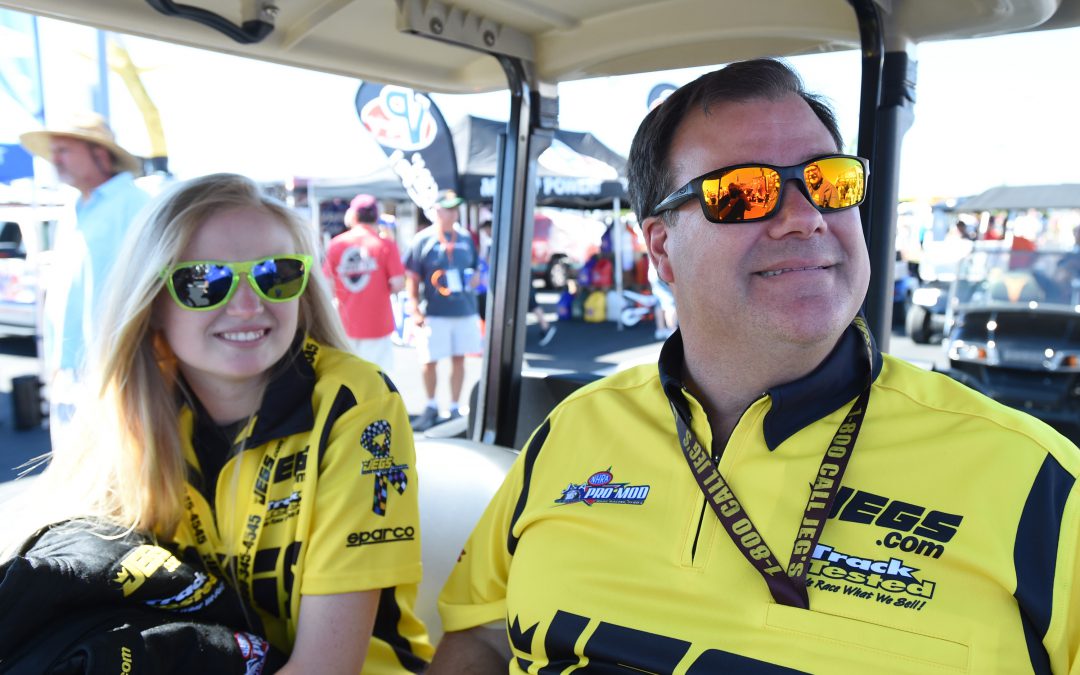 Coughlin, of Delaware, Ohio, wrapped up his No. 5 qualifying spot earlier Saturday, and then took out Chuck Little in the first round. Coughlin has won and advanced to the semifinal round in the two most recent Pro Mod events, trying to chip away at the points lead held by Rickie Smith.

"It's not running too bad," Coughlin said of his race car. "The guys have worked pretty hard on this thing the last couple of weeks, and we're making progress. We're making good, consistent runs – we're not the fastest car out there, but we are making consistent runs.

"We're trying our best to put this JEGS.com car back in the front. We're not only chasing down Rickie Smith but about five or six other guys who are all fully capable of doing it. We have to stick with our A-game and keep our foot to the floor."

Coughlin is one of four family members racing this weekend, joining brothers Mike and Jeg Jr. and son Troy Jr. Coughlin Sr. snared the No. 5 qualifying spot with a run of 5.867 seconds at 250.00 mph and then lined up against Little, No. 12 qualifier.

Sometimes, the pressure and expectations of racing in your home state can affect performance, but Coughlin has been up to the task.

"So far, so good," Coughlin said. "Having a lot of family and friends hasn't seemed to affect my driving. Once you get in the race car, you could have a full-out flu, but as soon as you put your helmet on, all that stuff goes away because of the passion for the sport."

JEGS High Performance is about 80 miles south of Norwalk, and there is plenty of JEGS yellow and black at the race track this weekend.

"It's awesome," Coughlin said. "There's a lot of associates here from JEGS.com, and we have a lot of family up here, too. It's pretty exciting. Racing so close to home, you have a lot of friends who come up who you haven't seen for a couple years. I ran into a friend from high school who I probably haven't seen since 1983, so it was cool seeing him again."

Coughlin will line up against Smith, the No. 4 qualifier, in the second round on Sunday.

"The Bader family does a good job with the track," Coughlin said. "The fans up here are pretty awesome. It's a packed house here in Norwalk, and I'm looking forward to tomorrow."