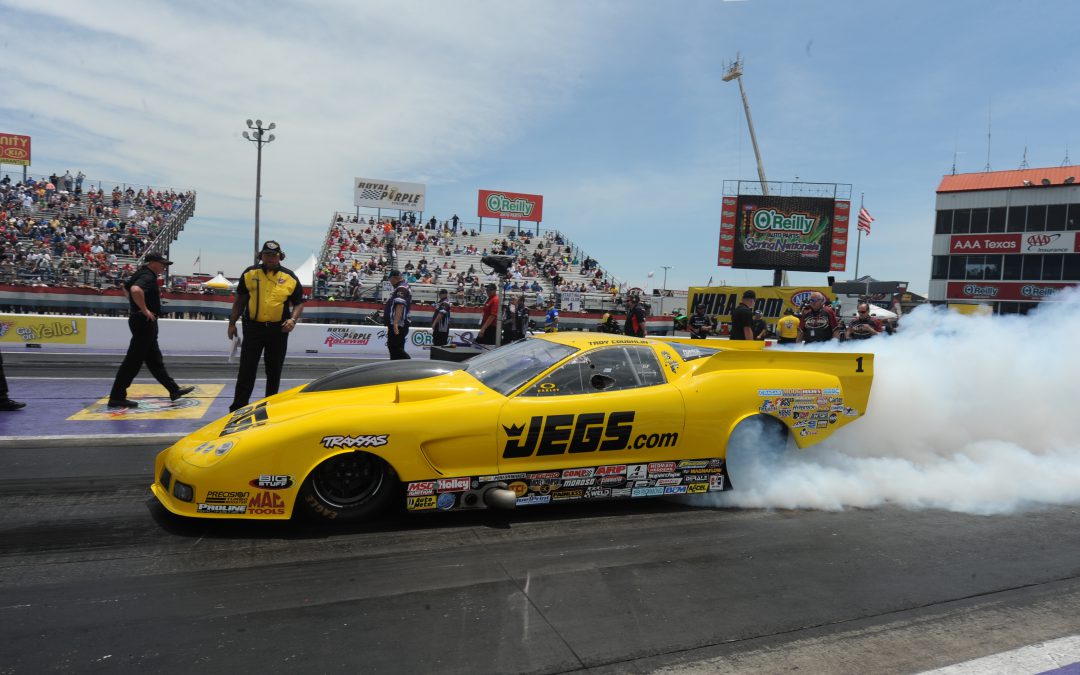 HOUSTON (April 28) — If there's one thing reigning Pro Mod champion Troy Coughlin has learned in three decades of drag racing it's that the sport in rarely fair to its competitors. That point was made abundantly clear Sunday at Royal Purple Raceway when last weekend's winner was unceremoniously dumped in the opening round of elimination action.

There were numerous upsets in the first round across all of the professional categories after nearly a full day of rain washed the track surface into a bald quarter-mile of concrete and asphalt, bereft of the usual layer of rubber that drivers like to use to gain better traction. But Coughlin was offering no excuses.

"It was kind of a tricky track out there but some guys were getting down so we should have found a way also," Coughlin said. "We made the calls we thought would work for us and this time they didn't. We got out there and just spun the tires hard. It started to settle down when the power came in, and that lifted the front end up. I was working the brakes to bring it down and when I finally did I could see I was over by the center line. I couldn't do anything.

"The track was definitely green this morning but it's coming around, and my hats off to the NHRA crew because they worked really hard on the surface. It just takes time when you get that much rain."

"We were just making too much power," Coughlin said. "That’s a good thing. Unfortunately today, by the time it started coming around, I could see he was out there on me so I played it safe. We just need to get all this horsepower under control and get back after it in Englishtown."

The Pro Mod Series skips the next two NHRA national events before returning to action May 31-June 2 with the Toyota Summernationals at Old Bridge Township Raceway Park in New Jersey.

"Drag racing can humble you and we're back in the locker room and feeling down," Coughlin said. "But just like I said last weekend when we won the whole race, we've got a great car, great people and great horsepower. We'll be ready to win the next race."