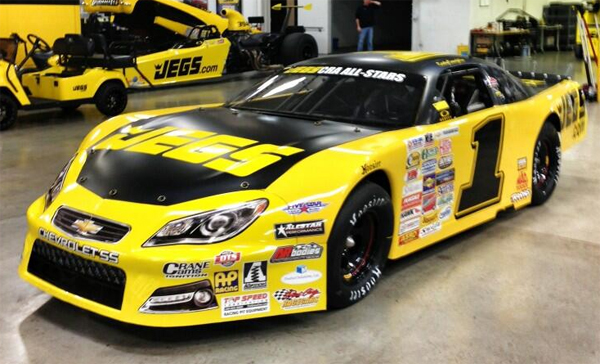 Like a ballplayer who had a successful Spring Training during the early-season months in warmer climates, 17-year-old Cody Coughlin is hoping to take the momentum built up during February’s Florida Speedweeks into the start of the “regular season” of short track racing.

During Speedweeks, Coughlin picked up his first Pro Late Model victory in his JEGS.com No. 1.  He finished in the top-five in four of his six starts at New Smyrna Speedway.  But while those statistics helped build momentum for a strong 2013 season, Coughlin and Team JEGS are now hoping to carry the strong showings all year long, starting with Saturday’s Pro Late Model feature at the historic Fairgrounds Speedway Nashville in Tennessee.

“I’ve never been there before, but Nashville sounds like a really neat place,” said Coughlin.  “I’ve been going to the shop a lot to check out how things are going since we got back from Speedweeks.  Everything’s looking good and we’ve got a really nice looking racecar to take down to Nashville.”

Coughlin had been agonizingly close to victory on several occasions in his first two seasons of Pro Late Model racing around the country before scoring that first win on February 15.  The victory has helped fuel desire for even more around the Team JEGS shop in advance of the Nashville event and the regular season for the JEGS/CRA All-Stars Tour on April 28.

“When you have success, you get more confidence,” added Coughlin.  “Winning and running up front during Speedweeks really boosted the entire team.  It also helps that the cars are getting better.  If you put all those things together, it should be a good recipe for a successful season.  We want to go for wins and go for that championship in the JEGS Tour and hopefully Nashville kick-starts those goals this weekend.

“My first goal is to win and it’s that way every time we go to the track.  This race will get the ball rolling for the team for the whole year.  There’s going to be a lot of competition in Nashville, so it’s a good place to get things kick-started to get a lot of positive energy behind this team for the whole season.”

Fairgrounds Speedway Nashville is one of the most iconic short tracks in the country.  It’s the home of the All-American 400, one of the sport’s most heralded events.  One man who knows that track better than perhaps anyone is two-time All-American 400 winner Freddie Query, who happens to be Coughlin’s team consultant.  Coughlin has been getting pointers from Query in advance of the weekend’s tilt on the historic half-mile.

Also helping the learning curve for Coughlin is the team’s new crew chief for the 2013 season, Nick Easton.  Easton spent the past several years mentoring another young star in short track racing, Kenzie Ruston.  He also worked for Kyle Busch Motorsports on their Late Model program and was the crew chief for Ryan Lawler during several successful Super and Pro Late Model seasons in the Southeast.

“Freddie has won two All American 400s there and Nick, Kevin (Hamlin, team manager) and the rest of the guys have all been there a bunch of times.  Being able to lean on their expertise is going to be huge for me.  I’ve heard that it’s a really fun, cool place to race.  It’s big and fast, which I like.  I’ve watched some YouTube videos, but I’m sure nothing will be as good as finally getting out there this weekend to see what we can do.

“With the team we’ve assembled, my family behind me and my faith, I think 2013 is going to be a very strong season for Team JEGS."

The Pro Late Model 100-lap feature at Fairgrounds Speedway Nashville is part of the inaugural Southern Super Series season-opener on Saturday, April 6.  Fans unable to make it to Nashville for the star-studded Late Model doubleheader can follow Coughlin’s progress on Speed51.com’s Trackside Now coverage of the entire event.