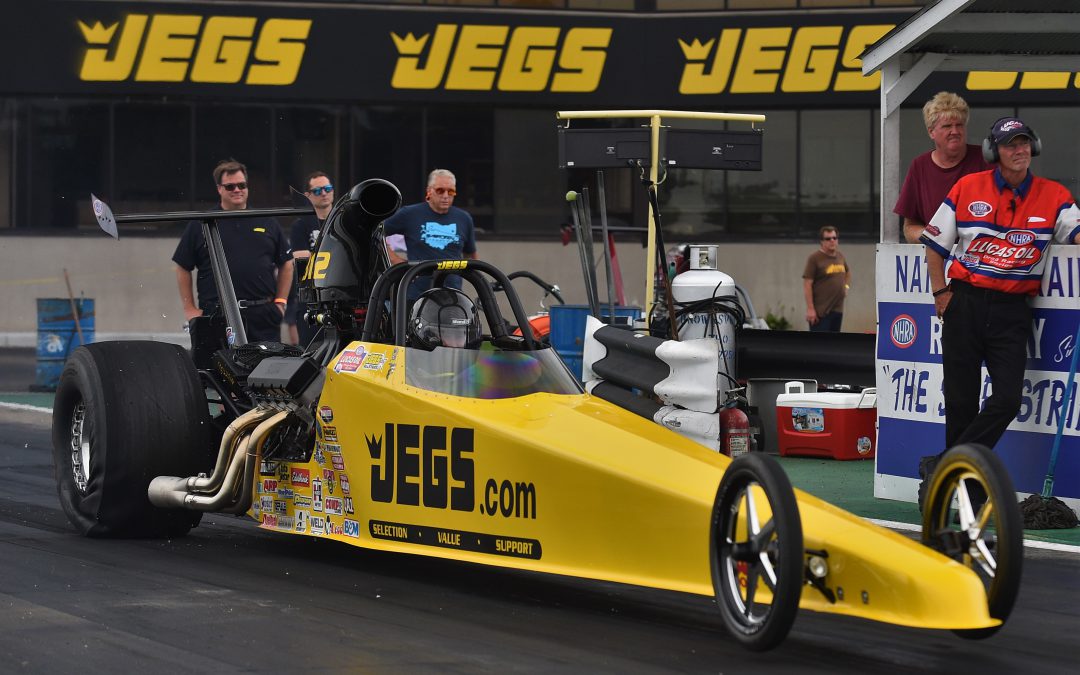 "It was a really cool experience, way better than I thought it would be," Coughlin said. "It was a little nerve-wracking at first knowing I was going to be racing all these great drivers from Division 3, because we have some of the best in the country, but I stayed focused on what I needed to do and ended up having a great time. It was very exciting to be a part of it all."

Mike Coughlin, a two-time D3 champion in the Top Sportsman ranks, wasn't quite as fortunate as his niece, exiting in Round 1 of Top Dragster action.

"I earned the win at the starting line but misjudged the finish line and gave it back," Mike lamented. "I think I was trying too hard. Really no one to blame but me. The JEGS.com Top Dragster was perfect."

"The boys were certainly disappointed but we all understood the call they had to make," Mike said. "We just danced around the rain and they had to get all the Sportsman stuff in so no news to report from our Juniors this meet."

Paige, a 17-year-old senior at nearby Worthington Christian High School, made lots of passes in her new JEGS.com Super Comp dragster, which was the primary goal of her debut weekend. She nearly earned more seat time early on but missed the special DRAW/RFC Super Comp Shootout presented by Moser Engineering by being a little too quick in qualifying for the one-off race.

"We had two runs to set the Shootout field and we were 8.898 and 8.893, so too quick, but I'd rather be too quick than too slow," Paige said. "It was actually okay because it gave me some extra time with (crewmen) Tony Collier and Justin Beaver, so they taught me how to read the weather station and use the computer system.

"I learned a lot. I learned what to do, what not to do, and what I need to work on for the next race. I can't wait to drive this thing again."

The No. 3 qualifier in Top Dragster, Mike entered the race knowing his JEGS.com rail was fully capable of winning the trophy. Even with the ever-changing weather conditions, Mike liked his chances heading into eliminations.

"We didn't do much to the car prior to the race because we didn't need to but we did try some things during the weekend to tune to the weather and man did that work," said Mike, a winner earlier this season in Pomona. "The car actually got better.

"It was purely the driver's fault we didn't win. I was struggling at the tree throughout qualifying but had a nice .010 in Round 1. I just didn't do my job at the other end; I zigged when I should have zagged.

"We still had a great weekend. A lot of the Top Dragster guys threw $20 each in a hat for whoever was top qualifier. I missed that by a little bit and ended up third, but that added to the excitement. Plus, I had my mother here Friday and my dad and my wife here today. We all enjoyed watching my niece Paige race so well and we're already excited for next weekend's race in Indy. We'll be ready!"