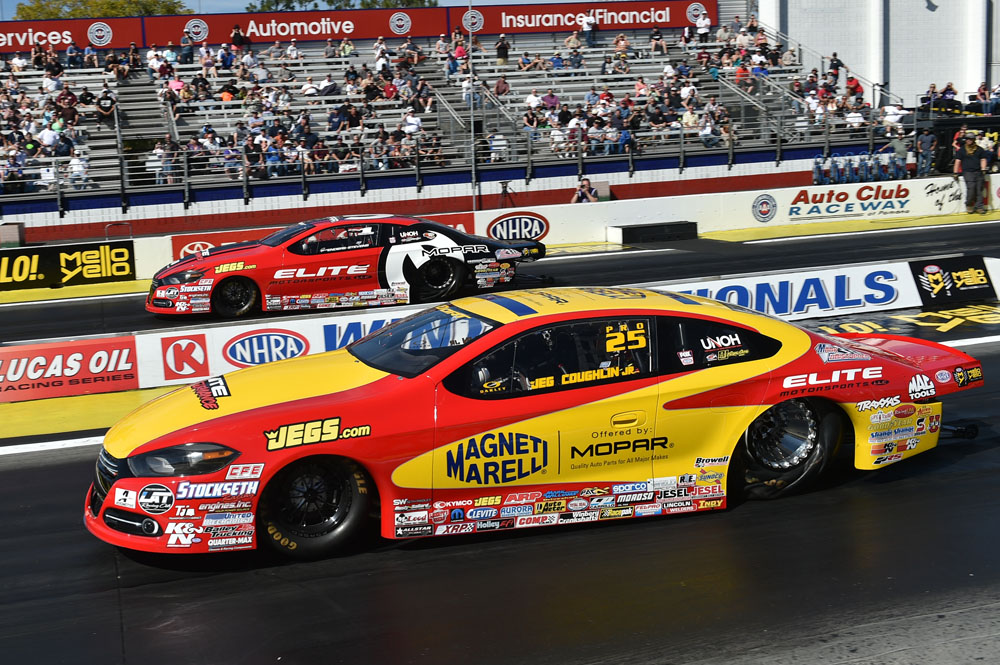 POMONA, Calif. (Feb. 14) — Facing a pair of multi-time champions on the day, Jeg Coughlin Jr. — a five-time Pro Stock champion himself — managed to break even at the season-opening 56th annual Circle K Winternationals. The 58-time national event winner beat back-to-back and reigning champ Erica Enders in Round 1 before fouling out against four-time titlist Greg Anderson in the quarterfinals.

"One down and 23 to go," Coughlin said, referring to the 24-race season. "I was saying earlier that we're not exactly where we want to be with the entire program but we are very pleased with how far we've come as a group since announcing this new deal with Dodge and Mopar in October.

"We’ve got a week and a half from now until the Phoenix race starts and I know Nick (Ferri) and Jake (Hairston) and the engineers at Elite Performance, as well as team owner Richard Freeman, are dying to take these Hemi powerplants back to the shop and get some dyno time on them. Until now, we haven’t quite had time to dyno them just yet."

Although his Magneti Marelli offered by Mopar/JEGS.com Dodge Dart still has that new car smell, Coughlin managed to beat teammate Enders with a 6.671 at 207.88 mph. He then took a good shot at Anderson but cut things a little too close at the Christmas Tree, fouling out with a -.002 reaction time. Anderson went on to post a 6.615 at 207.85 mph.

"I think we did remarkably well all things considered," Coughlin said. "We just came up a little bit short there against Greg. I was red by -.002 of a second and that ended our day right there at the starting line. It would have been a tough to get past Greg any way as he's been quick pretty much all weekend. I think once he got past his fuel debacle issues, he has super fast. You can't ever count those cats out.

"At the same time, we know where we need to be and we’re working towards it. I'm already anxious to see what gains we make between now and Phoenix."