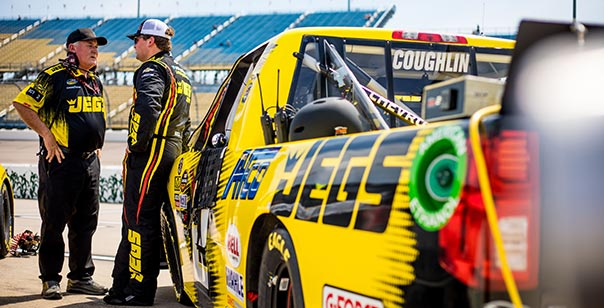 It would be easy then to assume Coughlin would have a solid base of knowledge that he could draw from for Saturday’s 200-mile NASCAR Camping World Truck Series Villa Lighting delivers the Eaton 200 presented by CK Power race.

That knowledge base will not apply the same this year; a dramatically different racetrack will greet Coughlin and the NASCAR Camping World Truck Series drivers when they begin practice on Friday, June 22. While the excitement of visiting a familiar track with a new twist, and new date on the NASCAR Camping World Truck Series calendar, will be rewarding for Coughlin, he will need to rely on his strong skillsets of adaptability and determination to navigate the 1.25-mile track. The 22-year old has proved that he can quickly adapt as he did during the 2016 season while racing in a multitude of series. Coughlin made Champion Racing Association (CRA) history that year as the first driver ever to win both the ARCA/CRA Super Series, his first championship in that series, as well as the JEGS/CRA All-Stars Tour championship in the same season.

The track has undergone a repave since the series last visited in 2017 in order to replace the track's 20-year-old asphalt. In addition to the new pavement, Gateway Motorsports Park has also upgraded catch fences, paved a substantial part of the inside track and added additional SAFER Barriers.

“It will be interesting to see what Gateway (Motorsports Park) is like since the repave,” Coughlin said. “Our team will have to rely on notes from my teammate Justin (Haley), who tested here earlier this year, and go from there. It will probably be a totally different approach than last year though, because of the repave. We’ll just have to see when we go out for practice. It is always fun to try and figure out new situations.

“I am confident that Jerry (Baxter), and my entire GMS Racing team will work hard with me to help navigate the newly repaved track. Our team has been working hard, and we have come up with a great strategy for this weekend. We are definitely on to something good.

“We have a lot of momentum going into this this weekend, and I am looking forward to getting behind the wheel of the No. 2 JEGS Chevrolet Silverado.”

The changes to the track have prompted the new strategy Coughlin has hinted at, a plan he and his crew chief Jerry Baxter are hoping will help the JEGS team gain valuable points to climb from the 11th place they are currently at in the NASCAR Camping World Truck Series driver point standings. They ride a streak of two consecutive top-eight finishes, for a total of five top-10 finishes this season.

Coughlin and the GMS Racing No. 2 team aim to improve upon their seventh-place finish the team posted last weekend at the Iowa Speedway. Coughlin showed his No. 2 Chevrolet was one of the fastest on the track and after varying pit strategy appeared ready to race for the lead in the final stages.

In NASCAR Camping World Truck Series starts on speedways (tracks 1 to 2-miles in length), Coughlin has recorded one top-five and six top-10 finishes. Three of the top-ten finishes on speedways have happened during the current 2018 NASCAR Camping World Truck Series season, at the Las Vegas (Nev.) Motor Speedway, Kansas Speedway, and the Texas Motor Speedway.

Coughlin will pilot Chassis No. 101 in the Villa Lighting delivers the Eaton 200 presented by CK Power. Chassis No. 101 is an established GMS Racing chassis which was utilized during the 2017 NASCAR Camping World Truck Series season, but this will be the first appearance for the year with the Baxter-led team.

Since entering the NASCAR Camping World Truck Series in 2013, the Statesville, N.C.,-based GMS Racing team has logged 10 starts at the Gateway Motorsports Park, resulting in three top-five finishes and six top-10 finishes, with an average starting position of 9.5 and an average finishing position of 9.4 with 32 laps led at the Madison, Ill.,-facility.

Baxter, crew chief for the No. 2 JEGS Chevrolet Silverado, recorded two victories (2014, and 2016), two top-five and two top-10 finishes in the NASCAR Camping World Truck Series at the Gateway Motorsports Park in four starts. In addition, he has two top-five finishes and two top-ten finishes in three NASCAR Xfinity Series (NXS) starts, as well as one pole.

With one win (2002) at the Gateway Motorsports Park, Ohio native Terry Cook, spotter for Coughlin, boasts the knowledge and confidence to provide Coughlin advice around the 1.25-mile track. The former NASCAR Camping World Truck Series driver has two top-five finishes and five top-10 finishes in 12 starts at the Gateway Motorsports Park in the NASCAR Camping World Truck Series.

The Villa Lighting delivers the Eaton 200 presented by CK Power will be broadcast live on FS1 on Saturday, June 23 at 8:30 p.m. (ET). It will also broadcast live at 8:00 p.m. (ET) on the Motor Racing Network (MRN) and SiriusXM NASCAR Radio. Qualifying for the 10th event of the 2018 NASCAR Camping World Truck Series schedule will air on Saturday at 7:00 p.m. (ET) on FS1. In addition, the final practice session on Friday, June 22 will be televised live on FS2 at 7:30 p.m. (ET).