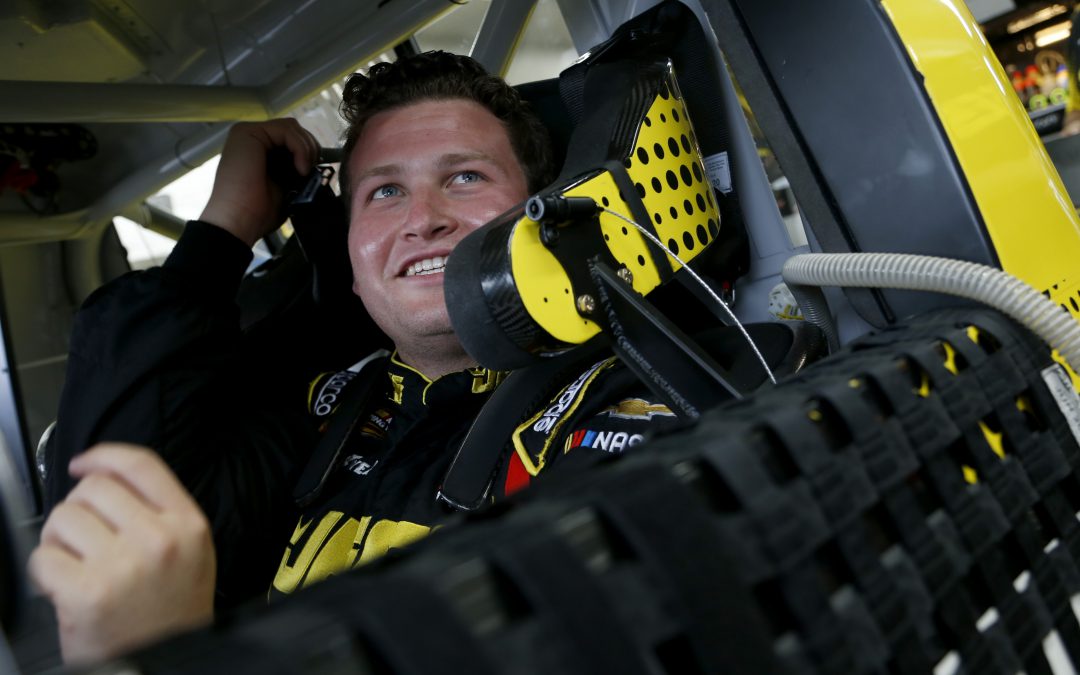 STATESVILLE, N.C. (May 19, 2018)—While an ill-handling race entry is easy to identify early, it is especially challenging when the machine you are piloting is sliding around at speeds nearing 180 mph.

Such was the case for Cody Coughlin, who knew from the start of the race that the race would be a constant fight, but he also knew he had to persevere until the checkered flag dropped on the 134-lap affair. Even when struggling against the wildness of an ill-handling JEGS Chevrolet Silverado for most of the race, Coughlin and the GMS Racing team never gave up.

When the checkered flag did finally wave, the driver of the No. 2 JEGS Chevrolet Silverado for GMS Racing finished a respectable 17th out of the 32-truck field for the 201 mile event around the 1.5-miles of Charlotte (N.C.) Motor Speedway.

“It was a tough night for our No. 2 JEGS Chevrolet Silverado team. The rain and the waiting created a challenging equation,” Coughlin said. “Our GMS Racing team fought hard, and I appreciate the effort.

“The JEGS team will regroup and be ready for the Texas Motor Speedway. I can’t thank my No.2 team and GMS Racing enough for all that they do.”

Coughlin and the No. 2 JEGS Chevrolet Silverado team started the North Carolina Education Lottery 200 under the lights Friday night with the momentum of two consecutive top-ten finishes, as well as with the results of two strong NASCAR Camping World Truck Series (NCWTS) practice sessions earlier in the day.

Wheeling his No. 2 JEGS Chevrolet Silverado at a brisk 178.737 mph, Coughlin placed tenth on the leaderboard at the Charlotte Motor Speedway during Friday’s opening NASCAR Camping World Truck Series practice. Under an ominous sky and even as rain threatened, Coughlin captured the sixth-fastest lap at 177.954 mph in final practice.

The threat of rain turned real, and the NASCAR Camping World Truck Series qualifying was cancelled. The field for the North Carolina Education Lottery 200 was set by owner points, giving Cody Coughlin, part of the four-truck GMS Racing contingent, the 15th starting position. It was the Delaware, Ohio, native’s career best starting position at the Charlotte Motor Speedway in two starts in the NASCAR Camping World Truck Series.

From the drop of the green flag it seemed as if it would be a very successful night for the JEGS team, as it didn't take long for Coughlin to advance to 11th place in the running order by Lap 20. However, just a handful of laps into the race, the 22-year old radioed crew chief Jerry Baxter that the JEGS Chevrolet Silverado had "no grip." Under the first caution on Lap 22, Baxter elected to take four tires and fuel, and made adjustments in hopes of getting the yellow-and-black machine dialed in more to Coughlin’s liking. When the end of the first stage brought out the green-checkered flag on Lap 30, he was scored in the 16th-place. The GMS Racing team decided to return to pit road following the conclusion of Stage 1, continuing to make multiple chassis adjustments to help improve the tight-handling of Coughlin’s Chevrolet Silverado. He restarted the segment in the 22nd place, but it seemed the adjustments had little effect for Coughlin as he continued to struggle with the handling.

Once the field took the green flag for Stage 2, Coughlin reported to Baxter continued handling woes, including the information that the No. 2 JEGS Chevrolet Silverado had no compliance and was plowing tight, preventing progression through the field. By Lap 50, Coughlin was scored in the 17th place, and at the end of Stage 2 on Lap 60, he was in the 18th place. Coughlin pitted under the yellow flag on Lap 65, and the team made more substantial adjustments, hoping to improve the truck's handling. The pit crew also changed four tires and added fuel, and Coughlin returned to the track in 15th place.

Shortly following the restart, the team's hard work, perseverance, and brisk pace paid off as Coughlin posted his second quickest lap of the race, and was scored in the 12th place on Lap 72. He reported to his GMS Racing crew a ‘lack of turn’ getting in to the corner, and that he couldn't drive it in the way that he wanted to on the green-flag run. So under the caution flag, Coughlin made his final pit stop of the night on Lap 82 for four tires, fuel, and one more opportunity to continue to work on the JEGS Chevrolet’s handling. Coughlin and the No. 2 machine returned to the track in 16th place. Baxter instructed Coughlin to conserve his fuel because he was about two laps shy on fuel, and the team did not plan on pitting again. As the laps wound down, Coughlin continued to fight with a race truck that was loose on exit. Even so, when the caution flag waved on Lap 89, Coughlin had moved through the field to the 12th place. Coughlin told his crew that he was doing everything he could with the JEGS Chevrolet as it ‘fired-off okay,’ and restarted in the 11th place with 42 laps to go. As the race wore on, Coughlin continued battling handling issues which caused him to fall back.

Ultimately, Coughlin crossed the finish line in a respectable 17th place, a finish not indicative of the energy and effort he and the team put into the night.

The next event on the NASCAR Camping World Truck Series schedule is the Rattlesnake 400 on Friday, June 8, at the Texas Motor Speedway. The FS1 and Motor Racing Network (MRN) will broadcast the race starting at 9:00 p.m. (ET).