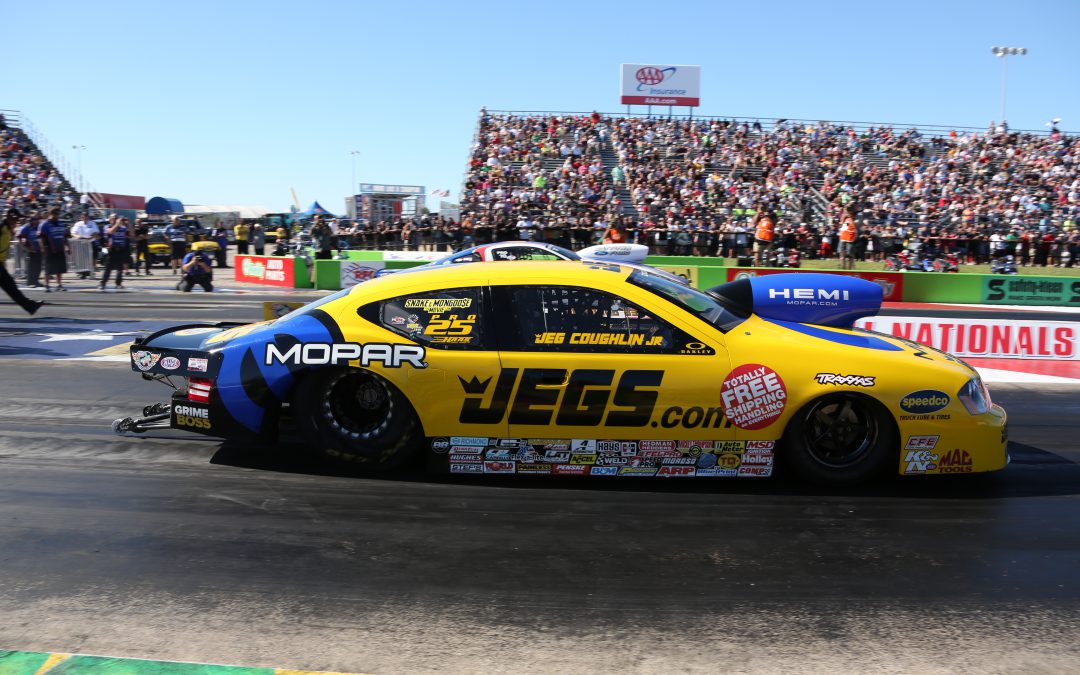 ST. LOUIS (Sept. 24) – JEGS.com/Mopar Dodge Avenger driver Jeg Coughlin Jr. came within a whisker of leading the Pro Stock points standings after the Dallas race, but the four-time class champion knows the battle for the 2013 title won't be decided at this point in the season.

Coughlin, who races in the AAA Insurance NHRA Midwest Nationals this weekend at Gateway Motorsports Park, briefly held the points lead in Dallas last weekend before Jason Line took control with a victory in the Lone Star state.

But as the six-race Countdown to the Championship nears the halfway point, Coughlin says there is plenty of racing left to make his move.

"It's a dogfight, without question," said Coughlin, who is second in the standings, eight points behind Line. "We really have a lot of good teams fighting for this championship, including two of my Mopar teammates, Vincent Nobile and Allen Johnson. We've got a lot of data with the three cars, so I feel like our opportunities to do well are certainly good."

Coughlin's resume is filled with brilliant numbers, from his championships to his 55 career victories to his 89 elimination-round wins on holeshots. But he still has something to prove, especially after a rare holeshot loss to Shane Gray in Dallas.

"We're in the race car for such a short period of time," Coughlin said. "Mental errors are not rewarded. But from my standpoint, when you make thousands of runs down the race track, you make the occasional. There's no question about it. Sometimes you get away with them, and sometimes you don't. In Dallas, I didn't.

"That part is disheartening when you look at the crew who works so hard on this car all year. You don't want to give one back. All you can do is make up for it at the next race, and that's St. Louis."

Coughlin has taken away a lot more than he's lost over his career, but you don't get a reputation of being one of the sport's best by gloating over past achievements.

"We don't count those," Coughlin said. "We're racers, man. We're only gratified by winning for a moment, and as soon as that's over, you don't look in the rear-view mirror very much. That's just the way it is. I've got a great team behind me, and I really look forward to the weeks to come."

That starts at St. Louis, where he is a two-time winner and five-time finalist.

"We've run really well in St. Louis," Coughlin said. "I've always enjoyed running the track there, and I've had great success in the Sportsman cars and also the pro cars. Maybe the luck of the Arch will be with us this weekend."