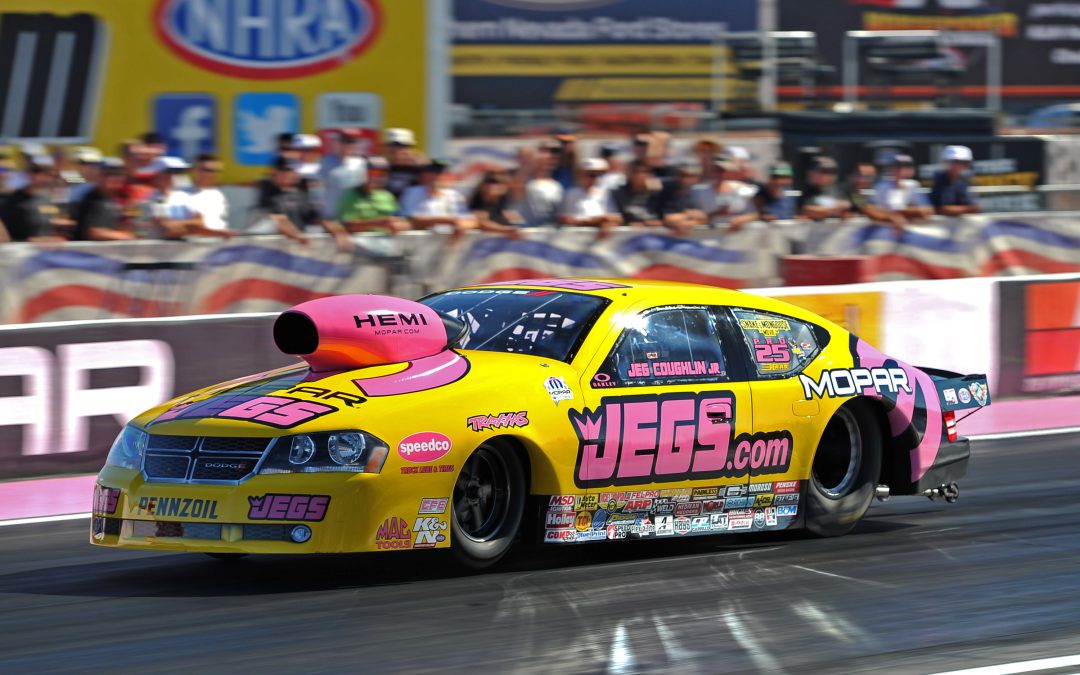 LAS VEGAS (Oct. 26) – If you believe JEGS.com/Mopar Dodge Avenger driver Jeg Coughlin Jr. will do anything different now that he has the Pro Stock points lead, think again.

Coughlin raced to the No. 3 qualifying position for the NHRA Nationals on Saturday at The Strip at Las Vegas Motor Speedway, and he intends to go to victory lane on Sunday.

"We're still racing to win, period," said Coughlin, who took over the points lead with a victory at Reading, Pa. "That's the way it is, and that's what we plan on doing tomorrow."

The four-time Pro Stock champion doesn't believe in "points racing," and his J&J Racing team won't change its approach with two races remaining in the Countdown to the Championship. Coughlin, whose best lap in Vegas was 6.645 seconds at 207.43 mph, leads by 45 points over Mike Edwards.

"We've got a really good car," said Coughlin, who has five Pro Stock victories in Vegas. "We've been a top-four car all four runs, and we're qualified third. That's a great effort. Tomorrow is going to be much like the last two days; it's going to be warm. We're going to be following the fuelers, and it's going to be a little testier for the crew chiefs, but I feel like we've got a great setup for it, and we're ready for action."

Coughlin's four passes were within .013 seconds, indicating the JEGS.com/Mopar Avenger is a consistent race car in the desert heat. Coughlin will line up against Greg Stanfield in the first round of eliminations on Sunday, as Stanfield qualified No. 14 with a lap of 6.701 seconds at 205.22 mph. This will be the third time in five Countdown races the two have matched off, with Coughlin winning the first two.

"Greg's definitely a tough competitor," Coughlin said. "We'll certainly have to be on our best behavior. He's capable of running a good number, and I know he's capable of driving his heart out. Our plan is to run low ET of the round and get the win light."

Coughlin and the team hosted a group of Cub Scouts from local Pack 830 this weekend, honoring the top five scouts who helped raise more than $15,000 in a popcorn sales drive to benefit military families. The scouts surprised Coughlin by donating $200 to the JEGS Foundation Racing for Cancer Research.

"It was great having them," Coughlin said. "They took in the action first-hand. That was awesome to see young individuals like that being inspired to raise money. Another neat thing is they contributed to the JEGS Foundation, which was totally unexpected and very, very cool."