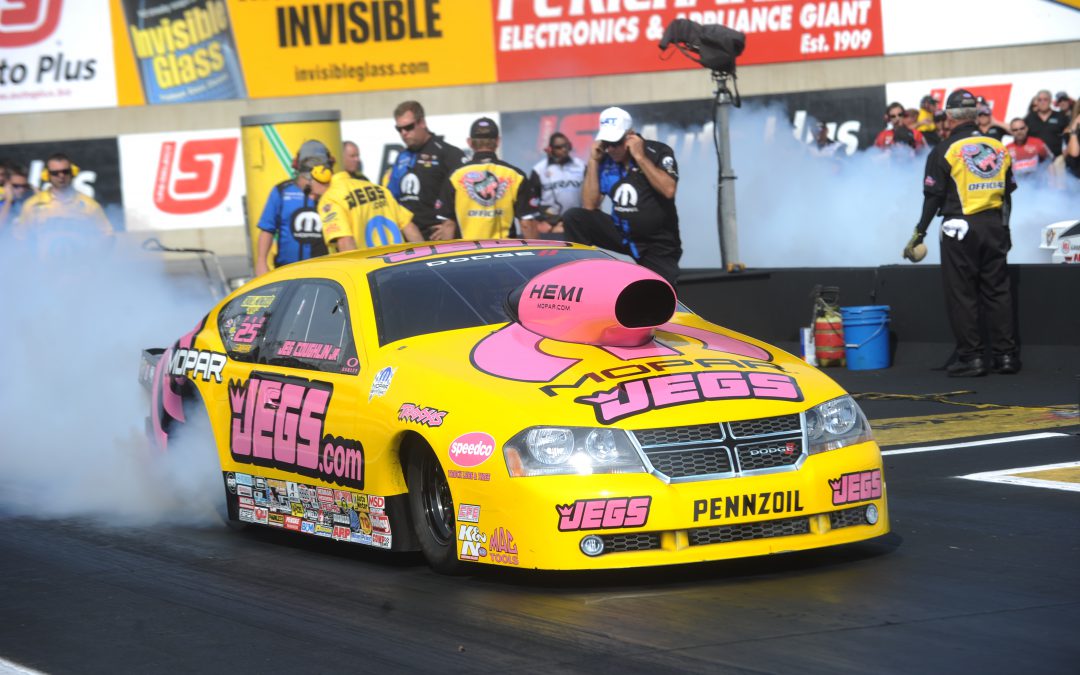 LAS VEGAS (Oct. 22) — With just eight rounds of elimination racing left in the season, four-time Pro Stock champion Jeg Coughlin Jr. enjoys a 45-point lead over second-ranked Mike Edwards, a cushion of slightly more than two rounds. It's a comfortable gap, but certainly not one that's insurmountable, keeping Coughlin and his JEGS.com/Mopar Dodge Avenger race team focused on the task at hand.

"There's little question in my mind that the championship will come down to the last day of the year in Pomona," Coughlin said. "That seems to be the way they script it every season and certainly that makes it exciting for all of us, fans and racers alike.

"Having said that, we can arrive in Pomona with some level of comfort if we can take care of business this weekend in Las Vegas. We need to be perfect. The guys need to check and double check every component on the racecar before each and every run we make. At the same time, my driving needs to be spot on. We need to be clicking on all cylinders to achieve our goal of winning another title."

The Strip at Las Vegas Motor Speedway should be the perfect place for Coughlin to put a stranglehold on his fifth Pro Stock title and sixth overall NHRA championship. He's cashed in at the facility on six occasions in the past, five times in Pro Stock (in 2000, 2001, 2002, 2008 and 2009) and once more in Super Comp (2012).

"I'm really excited about finishing the year in Las Vegas and Pomona because they are two of my all-time favorite racetracks," said Coughlin, a six-time Pomona victor. "The fact we've done well in both places also gives us a boost. If you're a drag racer, you live for a time where you're in position to finish on top. We're there right now and we need to close this deal out.

"I don't think the title will be decided one way or the other in Vegas but we may leave town with a much clearer picture. You have to remember, the three guys behind us in the points are all past NHRA champions. It's going to be a thrill ride."

Coughlin will have a built-in cheering section for him at The Strip as he plays host to a group of local Cub Scouts. Pack 830 recently completed a popcorn sales drive to help benefit the families of military members serving overseas. The pack exceeded its goal of raising $15,000, due in part to the added incentive that the top-five sellers would get to go to the race and meet Coughlin and the rest of the JEGS Mail Order team.

"These young guys have really impressed me with their hard work and dedication," Coughlin said. "We look forward to having them visit. Hopefully, they bring us a little extra luck."