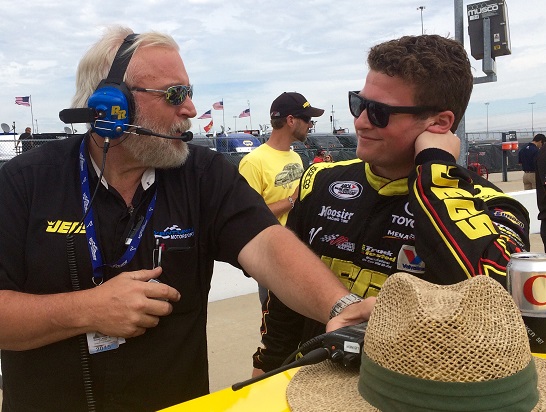 (Joliet, IL) – Joe Gibbs Development driver Cody Coughlin’s season has been filled with success.  After winning the pole on Saturday at Chicagoland Speedway, the promised of another strong run, or perhaps victory, was bright.  Unfortunately Coughlin's race didn't end with him atop the leaderboard like how it started due to two cut tires in the opening quarter of the SCOTT 150.

The Delaware, Ohio native led the field to the green flag and led the very early stages of the race, but his race was derailed after he ran over a piece of debris and cut a right-front tire down with a little more than ten laps on the board.

The 19-year-old driver limped his Team JEGS Toyota Camry back to pit road, but suffered fender damage due to the shredded tire.

Coughlin's Venturini Motorsports team got him back out on track after losing just three laps to the leaders, but Coughlin suffered yet another tire failure and hit the wall hard in turn four just a few laps later.

The damage was too severe for Coughlin to continue on.  His promising day came to a premature end after just 19 laps of racing.  The end result was a 26th place finish.

"The day started out so good, so it's a shame things ended the way they did," said Coughlin, who won his second ARCA Racing Series pole award of the year.  "I was really confident we'd have a good run today and I know we could have challenged for the win.  We'll regroup and move on to the next one.  Fortunately God kept me safe.  I just wish we could have had a better result for my dad (John) on Father's Day weekend.  He and my mom (Di) and sister (Kennedi) help me tremdously.  We have a lot of good races coming up for Dave (Leiner, crew chief) and the Venturini Motorsports team and with the additional guidance of Kevin (Hamlin, Team Manager for Team JEGS), Scott (spotter) and Dave Holt (crewmember) I know we can get the job done."