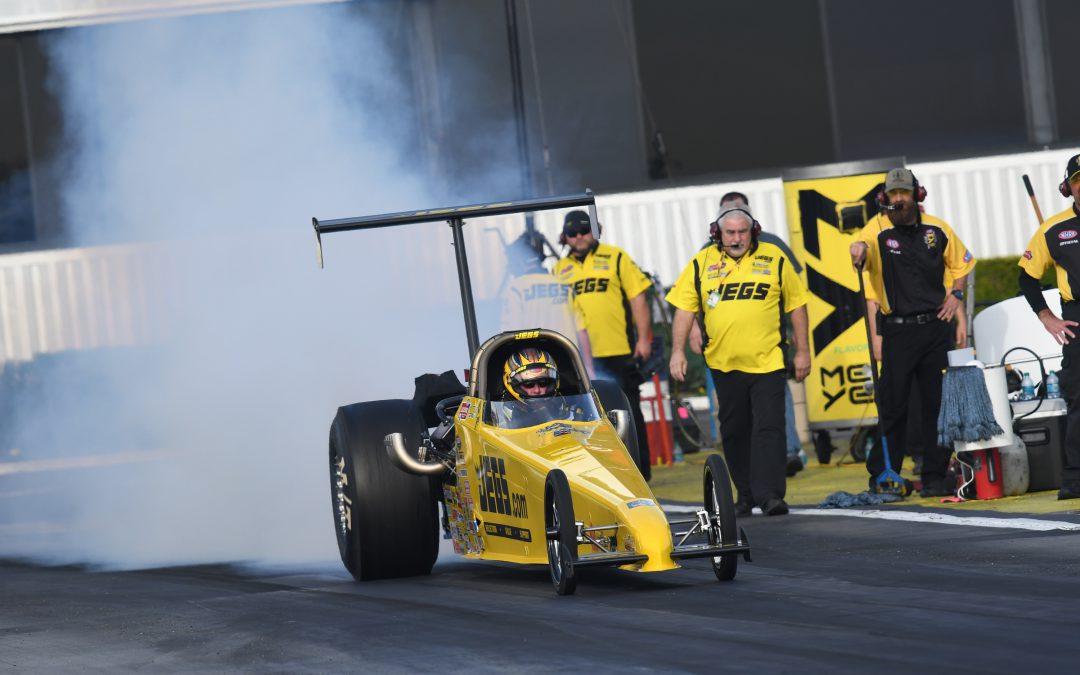 INDIANAPOLIS (April 26) — The 10-week gap between Mike Coughlin's season-opening Top Dragster victory February 12 at the Winternationals in California, to this weekend's Division 3 opener at Lucas Oil Raceway in Indianapolis isn't quite as long as the traditional winter break, but it sure has felt like it for the two-time D3 champ out of the JEGS.com camp.

"It definitely has felt like a long time since I've been in the dragster," Coughlin admitted. "Especially after winning Pomona because we all wanted to keep racing. Our schedule just didn't allow for it so the best I've been able to do is hang around the shop, keep up with all the other races on the computer, and support my brothers and my nephew.

"I'm pretty much as anxious to race as I've ever been."

The unusual second winter break was a result of Coughlin entering the Winternationals for the first time ever, which in and of itself was a result of some winter testing the team did in Phoenix.

"We needed to test and everyone was heading to Arizona so we loaded up and joined them knowing we'd have a chance to race on a track prepared by the NHRA crew for preseason testing," Coughlin said. "We got out there and were so pleased with the car and really enjoying the weather so we went on over to Pomona to make some more passes. Everything fell into place and we ended up winning. Pretty neat deal.

"This long time between races allowed us to rebuild our back-up motor, which we hurt in testing, and service our primary ProLine engine. We also rebuilt the tranny, but otherwise it was just general maintenance. There's usually not much to change when you're coming off a win."

This weekend's race represents the first of the year for Division 3, where Coughlin plies his trade each year. His past championships in D3 came in Top Sportsman, but this year he's chasing the Top Dragster title in his Dan Page-built rail.

"You always want to get off to a good start when you get to your home division," Coughlin said. "The first race is always fun: new cars, new paint schemes, new attitudes, everyone is tied in the points…there's a good vibe at this race.

"Aside from National Trail (in Columbus) this is the track where I've raced the most, going back to times helping my dad as a kid, to the divisional races and national events, we've had a ton of success at Lucas Oil Raceway and that's a lot of comfort for us.

"I'm also bringing my good luck charm, my son Clay. He came to Pomona and we won so he said he better come to Indy too. Makes sense to me! Our other son Jack will be at home golfing with his high school team, but I know he'll be pulling for us, and we'll be rooting for him."

Coughlin also will benefit from the support of his brothers, Dad, crewmen Greg Cody, Tony Collier and Dave Raurk, and EFI expert Ryan Macke of ComSYNC, who has worked with Coughlin since he began using their system.