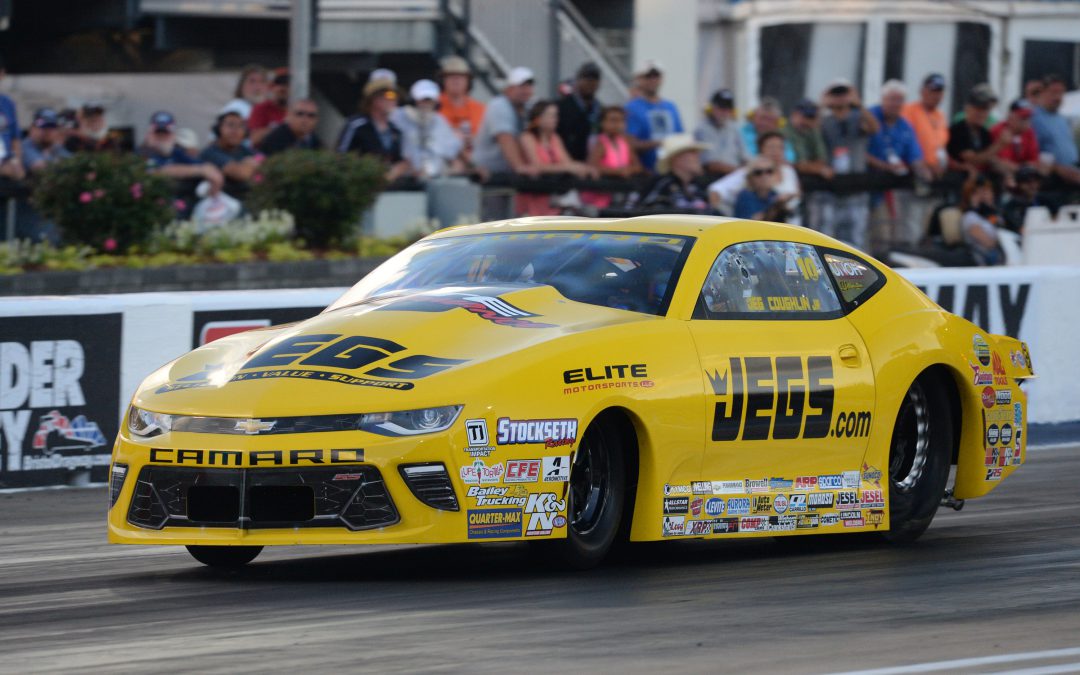 BRISTOL, Tenn. (June 16) — Five-time Pro Stock world champion Jeg Coughlin Jr. has the inside track on his third No. 1 qualifier of the year after powering to the provisional pole Friday night at the 17th annual NHRA Thunder Valley Nationals. Coughlin blazed down Bristol Dragway in 6.694 seconds at 204.85 mph in Round 2 to pace the field.

"We're off to a great start here on the mountain," Coughlin said. "Our Elite team has been working so hard on both engine and track performance. They've been trying hard to match the horsepower, chassis and clutch and we've been kind of R&D'ing a new set up in both my car and Erica (Enders, teammate) the past few weekends.

"It finally looks like both cars are happy. I’m No. 1 and she’s No. 3 so it looks like all of the hard work is paying off."

Coughlin's JEGS.com/Elite Performance Chevrolet Camaro was quick all day. He opened with a 6.711 at 205.79 mph, which placed him just behind early leader Bo Butner after Round 1. He then managed to outpace one of this year's two-time winners by three-thousandths of a second in the evening to steal away the pole.

"It feels great to get a great jump on the weekend," Coughlin said. "We ran a little bit later than we were scheduled so we were probably able to get a little more aggressive with the car, at least in the first gear or two. After that, we just traveled down the track.

"Pro Stock is one of those classes, it’s a never-rest situation. You can crawl your way to the top but if you rest for even a week, you’ll fall back a few spots. My hat’s off to the entire Elite team. They’ve been thrashing extremely hard in the midst of seven races in eight weeks and that will tax any team. But our team is strong, prepared and they communicate well, which makes these stretches much nicer."

In two decades of racing in the factory hot rod class, Coughlin has collected a modest 20 low qualifier honors in his career. This year he's already done it twice, in Houston and Charlotte, while successfully qualifying in the top half of the field at all 10 races.

"It feels fantastic to be on the positive side of things this year," Coughlin said. "It’s funny, for some reason we just struggled with our program last year and we knew the Chevrolet Vincent (Nobile, teammate) was closing the season with won a race and was in a couple more finals. Our team owner Richard Freeman elected to go that direction and consolidate everyone into one program and it has certainly paid off.

"The team is much more at ease this year and thankfully they’re not having to work 24/7, week-in and week-out like last year. Plus, we’ve got fast cars on top of it all so performance-wise we feel great. Our JEGS Camaro is a brand-new Rick Jones built car this year and it’s a mean machine."

Coughlin isn't the only member of his famous racing family to earn a top spot Friday. His brother Troy Coughlin, a two-time champion in the Pro Mod class, posted a 5.854 at 254.33 mph to lead his category.

"I’ve joked around and said I think this thing will go down a dirt road with the way it adheres to the track," Coughlin said. "Looking at Troy, I bet he's feeling the same way with his Corvette. I’m certainly fortunate to have a great car and team behind me and with me. I'm looking forward to tomorrow. The heat will be back so we’ll get out there and see if we can stay No. 1."