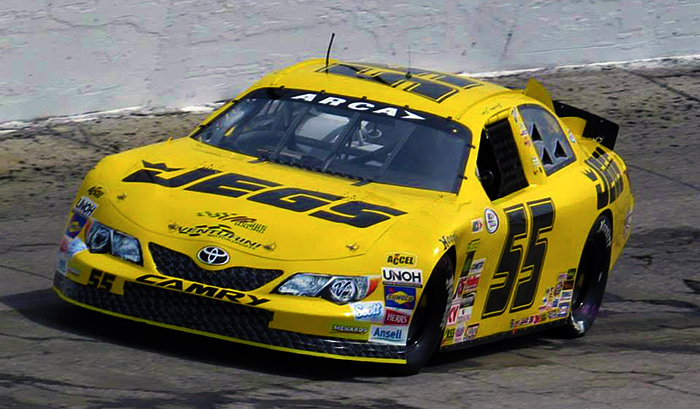 Cody Coughlin will be making his third career start in the ARCA Racing Series presented by Menards at Ohio’s Toledo Speedway on Sunday. Coughlin enters Sunday’s event after making previous starts at Mobile International Speedway (AL) and Salem Speedway (IN).   After a strong debut at Mobile that saw him racing among the top-five through the race, Coughlin recorded his first career top-10 finish during his last start at Salem.

Prior to making the jump to the ARCA Racing Series, Coughlin competed in a Late Model-type stock car on the JEGS/CRA All-Stars Tour.  At 18 years old, Coughlin captured the 2013 JEGS/CRA All-Stars Tour championship. Despitethe overwhelming amount of talent displayed by the Delaware, Ohio driver, he will be the first to tell you that it took some time for him to get accilimated to the heavier ARCA cars. After two events and numerous test sessions in his No. 55 JEGS.com Toyota for Venturini Motorsports, Coughlin feels as though he is now familiar enough to get in the car and get up to speed sooner than he was previously.

In addition to testing done with Venturini Motorsports leading up to Sunday’s event, Coughlin recently competed in the ARCA/CRA Super Series 7-Up 150 Border Wars event at Toledo Speedway.  After starting the event in the 17th position, Coughlin gained valuable experience on the Ohio half-mile oval as he worked way through the field on his way to a seventh-place finish.

Sunday’s race will be broadcast live at 2pm ET on FOX Sports 1.  It will be the first time Coughlin has raced in front of a live audience on national television.  Although Coughlin says that there’s no additional pressure or incentive to win because the race is on TV, he thinks it will be great to put his No. 55 JEGS.com Toyota out in front of a larger audience watching on FOX Sports 1.  After a day of testing at the track, Coughlin believes his team will be competitive enough to battle with the best of ARCA in front of the national audience.

When Coughlin is not busy inside of his No. 55 JEGS.com Toyota he is more than likely on the golf course, shooting for a below-par round with his friends and family or watching his favorite athlete Tiger Woods compete.  Coughlin says that he enjoys watching Woods because of the amount of intensity and focus that he displays when he’s on his A-game.  He believes that he can take some of the positives away from Woods’ intensity and focus on the course to use in his own career on the track.