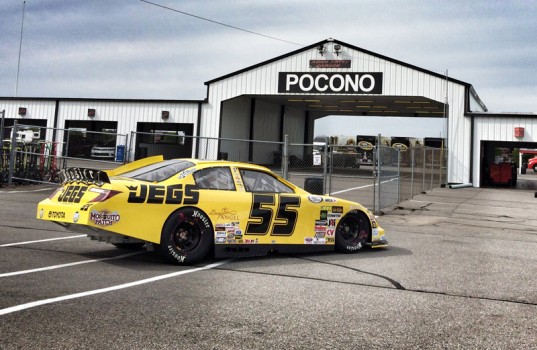 Ready to Go Fast
Cody Coughlin will be making his fourth career ARCA Racing Series presented by Menards start Saturday at Pocono Raceway in Long Pond, PA.  Growing up through the short track ranks near his home state of Ohio, Coughlin has yet to experience the speeds of a superspeedway like Pocono until now.  The 18-year-old Joe Gibbs Racing development driver is very excited to test the high speeds of "The Tricky Triangle" for the first time on Saturday afternoon while continuing his progress in the ARCA Racing Series ranks.

Steady Improvement
Through three ARCA Racing Series starts in 2014, Cody Coughlin has shown continuous improvement with his finishes.  After finishing 13th in his series debut at Mobile International Speedway (AL) in March, Coughlin recorded his first career ARCA Racing Series top-10 with a ninth-place finish at Salem Speedway (IN) in his second start.  Coughlin, of Delaware, Ohio, followed that up with a career-best finish of sixth at Toledo Speedway (OH) last month.  Heading into Pocono Raceway, Coughlin hopes to continue this type of steady improvement and record his first career top-five finish in the series.

Practice Makes Perfect
In addition to a scheduled practice session at Pocono Raceway on Friday morning prior to qualifying, Coughlin and the Venturini Motorsports team also took part in an open practice session for ARCA Racing Series teams on Wednesday afternoon.  Coughlin looks forward to having the additional track time throughout the week, as he believes it will allow him to work with crew chief Jeff McClure to get the car fast and comfortable for Saturday's 200-mile race.

TV Time
At the conclusion of his last ARCA Racing Series start on May 19 at Toledo Speedway (OH), Cody Coughlin made his first post-race appearance on a live television broadcast.  As a result of his sixth-place finish, Coughlin was interviewed by longtime ARCA Racing Series broadcaster Jim Tretow of FOX Sports 1 following the event.  With Saturday's Pocono 200 being broadcasted live on FOX Sports 1, Coughlin hopes to once again be discussing another solid finish on live television at the end of the day.

Hungry as a Lion
Once Cody Coughlin climbs out of his No. 55 JEGS.com Toyota on race day, there's nothing he enjoys more than a meal with his family at a local Chinese restaurant.  Coughlin says that he is a big fan of Chinese food and likes to visit Hunan Lion, a spot near his hometown of Delaware, Ohio, whenever possible.