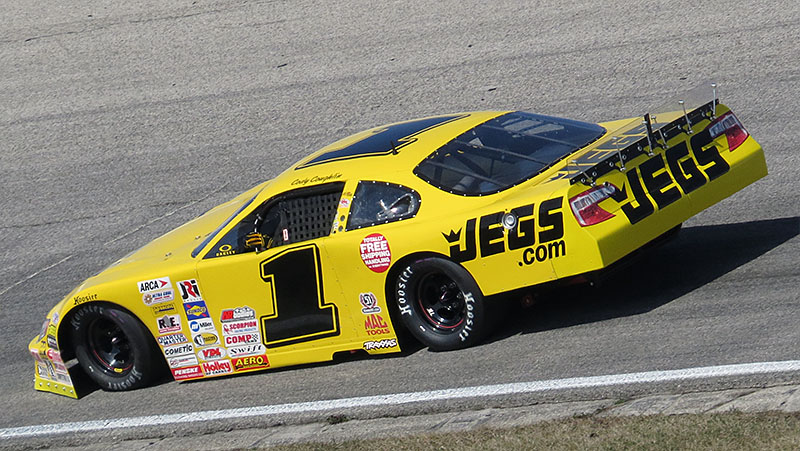 Returning to His Roots:
Eighteen-year-old Joe Gibbs Racing Development Driver Cody Coughlin has spent most of his 2014 season advancing his racing career on the speedways of the ARCA Racing Series, but this weekend he'll be back to his roots on the Columbus Motor Speedway bullring with his JEGS No. 1 Super Late Model. Coughlin cut his racing teeth in Late Model competition and was the 2013 JEGS/CRA All-Stars Tour Champion, the 2011 JEGS Tour Howie Lettow Rookie of the Year and has won Late Model races at tracks from the Midwest to Florida.
Give Me Back My Hometown:
Columbus Motor Speedway is located just miles from his home and from the JEGS headquarters in Delaware, Ohio. Coughlin has four career Late Model starts at Columbus and two have finished with top-five results. His most recent effort at the third-mile oval, a JEGS/CRA All-Stars Tour event back in May, saw Coughlin rally from the 16th starting position to bring home a fourth-place finish.
ARCA Lowdown:
Coughlin's move up the racing ladder under the guidance of Joe Gibbs Racing has taken him to five ARCA Racing Series starts so far in 2014. Since his debut in March at Alabama's Mobile International Speedway, Coughlin has piloted the No. 55 JEGS.com Toyota for Venturini Motorsports to three top-10 finishes, highlighted by a sixth-place run in another home state location, Toledo Speedway.
The "Yellow Sea":
The Yellow Sea may be located off the coast of China, but a different "Yellow Sea" will be found in the grandstands of Columbus Motor Speedway this Saturday. Many employees, customers and fans of JEGS, the leading high-performance auto parts superstore, will be in the grandstands of Columbus Motor Speedway in their JEGS-yellow hats, shirts and more.
Discover the "Discovery City":
Having lived in the Columbus, Ohio area his entire life, Coughlin has become quite familiar with the attractions around his hometown. For an 18-year-old like Coughlin who enjoys just about any kind of outdoor activity and playing sports, there's plenty to do around town.
"There are a lot of fun things that I like to do around Columbus, like some great golf courses and some really fun places to play tennis. As far as tourists go, we've got a great zoo here in Columbus. It's one of the best of the country."
Coughlin, like the rest of the family, is also big supporter of the nearby Ohio State University Buckeyes.
"I always root for the Buckeyes no matter what sport it is. I hope to make it out to a few football games this year and we've been fortunate enough to attend a number of games in the past. I enjoy watching the games on TV even when I'm not there. I'm not a huge stick-and-ball sport fan, but when they're on, I always enjoy cheering on the Buckeyes."
Follow Cody:
Cody Coughlin on Twitter: @Cody_Coughlin
Team JEGS on Twitter: @TeamJEGS
Joe Gibbs Racing on Twitter: @JoeGibbsRacing
Venturini Motorsports on Twitter: @VenturiniMotor