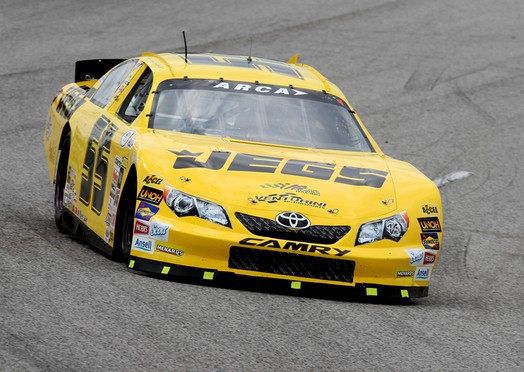 Back to His Roots

Cody Coughlin will return to his short track racing roots this weekend when he pilots the No. 55 JEGS.com Toyota for Venturini Motorsports at the half-mile Winchester Speedway.  Coughlin, who won the 2013 JEGS/CRA All-Stars Tour championship, cut his teeth racing on short tracks and is excited to return to his roots this Sunday during the ARCA Racing Series Herr’s Chase the Taste 200.

Cross Flag in the Air

At the conclusion of Sunday’s event at Winchester Speedway, Cody Coughlin will be shown the cross flags to indicate the halfway mark of his 12-race ARCA Racing Series schedule with Venturini Motorsports.  In five starts thus far, Coughlin has not finished outside of the top-15 and has three top-10 finishes including a season’s best sixth-place finish at Toledo Speedway (OH).

Adventures on the High Banks

During his career racing Super Late Models, Cody Coughlin has tested the 37-degree banking of Winchester Speedway on a number of occasions.  The track coined as “the world’s fastest half-mile paved track” is one of Coughlin’s favorite race tracks to visit.  Coughlin calls Winchester “a totally different animal” than any other short track that he has raced on, but one that he looks forward to trying to tame with the Venturini Motorsports team this weekend.

During his weekend off from the ARCA Racing Series, Cody Coughlin strapped into his No. 1 JEGS Super Late Model this past weekend in Columbus, Ohio.  Coughlin turned the fastest lap in practice for the JEGS 125 ARCA/CRA Super Series event before the skies opened up and rained forced the race to be postponed until August 2.  The rain date will create a busy weekend for Coughlin that weekend, as he is expected to race in the ARCA Racing Series event at Pocono Raceway (PA) on Friday, August 1 and then travel back to Columbus to compete in his Super Late Model on Saturday.

Ask Cody Coughlin who his favorite racecar driver was growing up and you’ll find that the answer isn’t a simple one for the 18-year-old Joe Gibbs Racing Development driver.  During his time watching stock car racing, Coughlin has looked up to a number of NASCAR champions including Jimmie Johnson, Tony Stewart, Matt Kenseth, Kyle Busch, and Jeff Gordon.  Coughlin has had the chance to meet all five of those drivers during his career and each of them has offered him valuable pieces of advice to use during his racing journey.