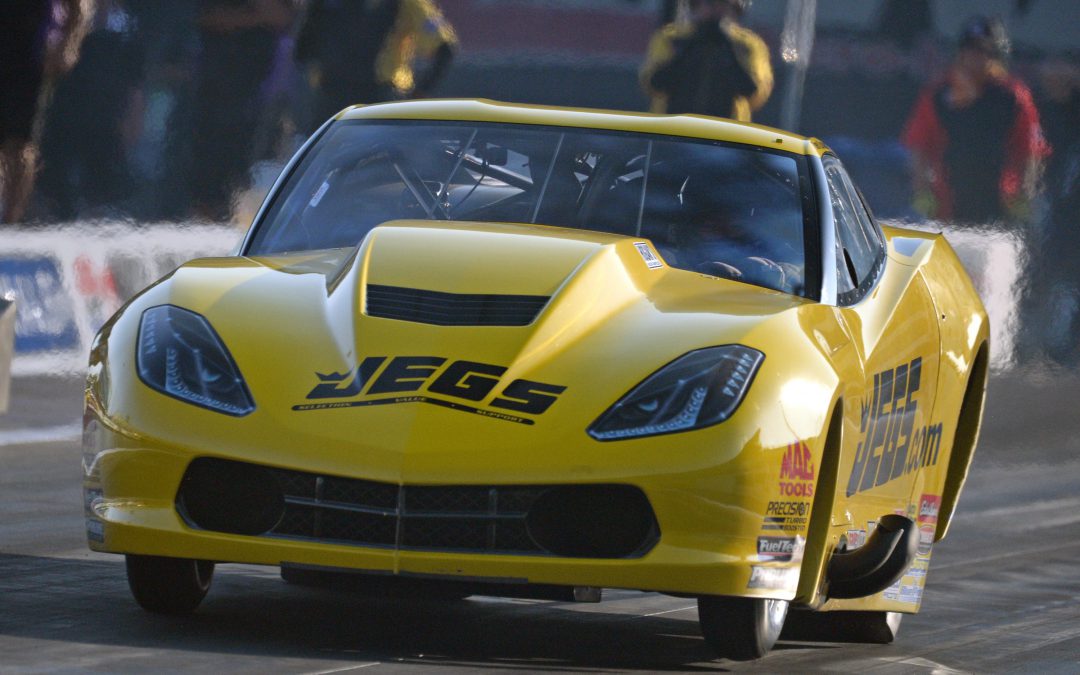 CONCORD, N.C. (April 29) — Perhaps no one was happier to suffer through the heat and humidity that settled on zMax Dragway Saturday than two-time Pro Mod world champion Troy Coughlin, whose Friday night pass of 5.770 at 254.95 mph remained unchallenged in the final two rounds of qualifying for the eighth annual NHRA Four-Wide Nationals.

"I was sweating it out, literally," Coughlin said with a laugh. "In reality, it got too hot today for anyone to really challenge that 5.77. The day kind of turned into a test-n-tune for tomorrow's elimination action because all indications are that we'll see very similar conditions. Either way we'll be ready.

"It is very satisfying and rewarding for Steve Petty and the rest of the guys on this JEGS.com race team to put this turbo-charged Corvette on the pole. They're the ones that earned it through a bunch of hard work. I'm super proud of them."

"Well, we have two turbo-charged cars, a supercharged car and a nitrous-assisted car in our foursome so fans will see a little of everything," Coughlin said. "I'm still keeping a close eye on the supercharged guys because I have a suspicion they are playing possum with the rest of us based on how much quicker they were last weekend.

"All I know is every pass we make, we work hard to be better than the last time. The car got better this weekend and we're No. 1 qualifier at the first four-wide race in the history of the J&A Service Pro Mod Drag Racing Series and that's a pretty cool accomplishment. It'll be a lot sweeter if we're the first four-wide winner also."

In the past, first-timers to four-wide racing have struggled with staging, especially on race day when the pressure is at the highest level. But Coughlin, the world champ in 2012 and 2015, says he's got a plan to make sure he's not affected by the extra racecars filling the lanes.

"I feel pretty confident in what I'm going to do," Coughlin said. "It will be interesting when you have multiple types of power-adders all up there trying to stage because the procedure is different for each one. I hope there are no mistakes because we want to put on the best show possible, but more than that, we want to put this JEGS.com C7 in the winner's circle."