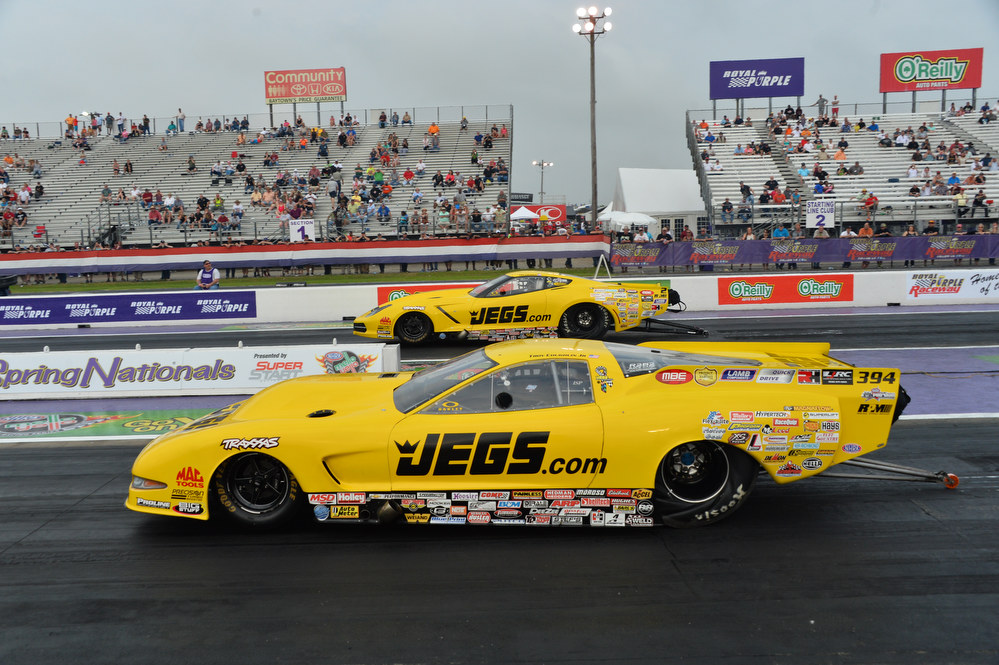 HOUSTON (April 25) — The two-car JEGS.com Pro Mod team of father and son drag racers Troy and T.J. Coughlin successfully qualified both of their sleek Chevrolets for this weekend's elimination rounds at Royal Purple Raceway. Due to numerous weather delays in the last two days, Round 1 has been postponed from Saturday evening until 10 a.m., Sunday, but that hasn't changed their perspective.

"We're both in, and in this class, anyone that's in the field can win the race," Troy said. "That's already been proven this year. We made a bunch of passes down both lanes between the two JEGS.com cars so we have enough data to run either lane and get some win lights. The crew guys will plug in the right tune-ups for tomorrow and these cars will be hauling the mail, I promise you that."

"For awhile there it looked like Dad and I may have to face each other in Round 1 but the order got shuffled around a bit in the final session and now we won't face each other until Round 2, if we both get that far, and I'm confident we will," rookie T.J. said. "That will be a fun race, and I'm sure it'll happen many times throughout the year so we'll be keeping score for sure.

"We had two solid passes out of the three we had so, although I think we can run much better, I know (tuner) Steve Petty and the guys have done a ton of work this weekend to get us qualified so we're thankful and thrilled to be in the field.

"This class is very challenging and it makes it even more challenging when the weather is all over the place like it's been so far this weekend, especially with these turbo-charged cars. Thank goodness Steve is the best tuner out there."

The race has been interrupted several times by scattered rain but so far none of the action has been cancelled outright. The wet stuff certainly hasn't dissuaded the spectators, who have packed the pits and grandstands.

"These Texas fans are outstanding and they've been so cool to T.J. and I," Troy said. "As a father, I'm so proud of how fast he's adapted to these racecars because they can be animals, but he's been great and it's neat to see the fans appreciate what he's doing. I think people see a little of themselves in T.J. because he's just a kid living a dream and racing in the NHRA.

"Texas also is a great state for JEGS and we love coming here any chance we get to interact with our customers in person. Like they always say, God Bless Texas!"