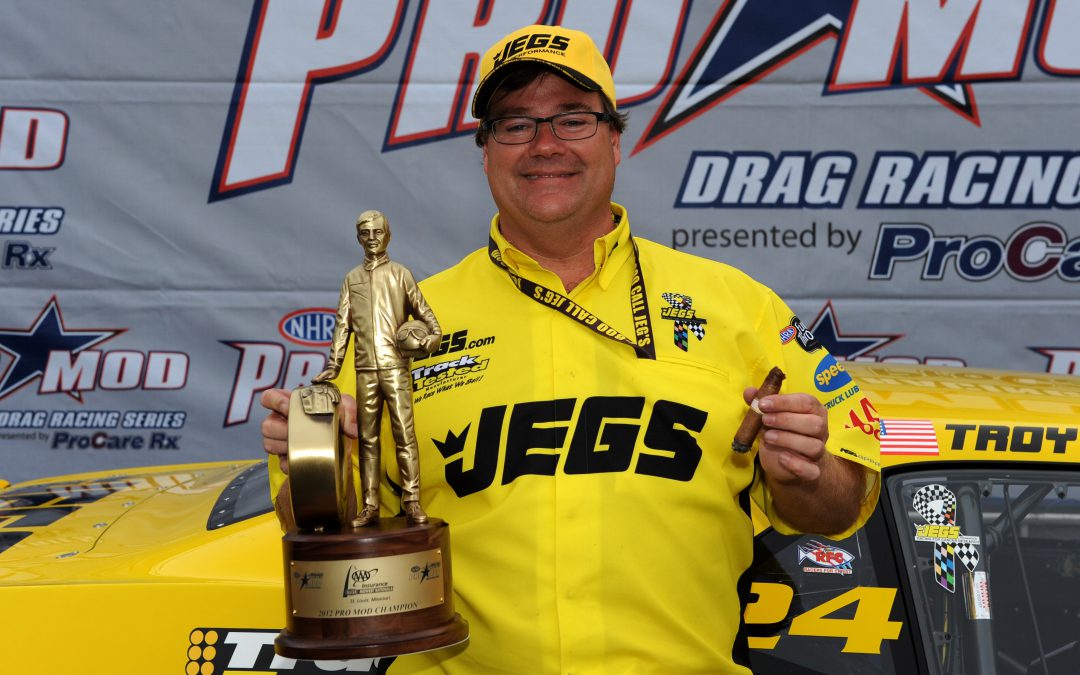 ST. LOUIS (Sept. 30) – Every year Troy Coughlin buys a box of cigars in anticipation of winning a national event in the NHRA Pro Mod Series presented by ProCare Rx. After defeating Danny Rowe in the finals of the AAA Insurance for his first Pro Mod win since 2005, it was finally time to break the seal.

"We've been saving these babies for a while," Coughlin said as a broad smile came across his face. "I was hoping we'd pick up a couple more wins this year but it's not for a lack of effort.

"The win hasn't sunk in 100 percent yet. I do know we're pretty excited here."

Coughlin beat Rickie Smith, Leah Pruett and Pete Farber before crossing paths with Rowe in one of the most herky-jerky final rounds the class has seen in a while.

With the trophy on the line, Coughlin's JEGS.com turbo Chevy Camaro started up and rolled to with waterbox without issue. Rowe's car fired up, sounded all wrong and was shut off on the line. Ever the sportsman, Coughlin was willing to wait, but was instructed to move forward and do his burnout by an NHRA official.

"It's always a better show when you have two cars competing," Coughlin said. "We try to be good sportsmen and didn’t want anything for free. But when the NHRA was telling me to go ahead and start doing the burnout, I kind of had to follow their lead.

"Fortunately, (Rowe's team) fixed their problems pretty fast, so we were able to get a good race off after all."

When they finally lined up, there was a slight moment of anxiousness when it looked like the JEGS.com turbo didn’t want to stage. But it finally turned on both bulbs and took the green light cleanly.

"We were on the lucky end of the stick and made a great run," Coughlin said. "When I let the button go at the starting line in the final, I knew it was over when I didn’t see him, because those blower cars accelerate fast. From then on, I just focused on making a clean run.

"It was just our time to win, finally."

"My guys Steve Petty, Bryan Metzenheim, Mike Rees, Nick Gaylord and all the folks back at JEGS.com deserve all the credit," Coughlin said. "Pro Line, our engine shop, has given us a fantastic power all year. We beat a five-star team today."

The JEGS.com Camaro was firing straight and true all weekend. In the quarterfinals against Pruett, Coughlin was off the line first and won on a holeshot. His .032-second advantage paired with a pass of 5.922 seconds at 236.75 mph was enough to overcome Pruett's 5.912-second lap at 251.58 mph.

Coughlin said winning this Wally trophy ranks among his favorite moments in racing.

And the season is far from over for Coughlin. He moved into third place in the Pro Mod standings; one point behind second place and 42 points out of the lead.

"Going into the last race out in Vegas with this kind of momentum is important," he said. "There are still some spots up for grabs and everything is still pretty tight. Any time you can go to the end of an NHRA season and be in the running for a top three for four spot in your class, that's saying something."