Pro Mods to race four-wide for first time ever with support from JEGS.com, Plugfones 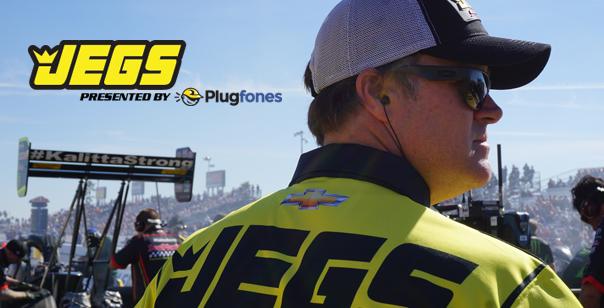 DELAWARE, Ohio (March 3) — JEGS.com, a worldwide leader in high performance parts and longtime NHRA drag racing supporter, has signed on as the title sponsor of the J&A Service Pro Mod Drag Racing Series event scheduled to take place as part of the eighth annual NHRA Four-Wide Nationals. Plugfones, a hearing-protection company whose high-quality products are available on JEGS.com, will be the presenting sponsor.

"We are very happy to bring the first-ever four-wide Pro Mod race to the fans along with our great friends at Plugfones," said Troy Coughlin, one of four brothers that owns and operates JEGS High Performance. "As a Pro Mod racer myself, I can tell you we are super excited about racing four-wide. We've been watching the other pro classes have fun for seven years and it'll be a blast to finally join them.

"Racing four-wide will put most of us on a learning curve because it's definitely a little different in how you stage and race on Sunday, but we're all on equal footing in regards to experience so we'll do our best to put on a great show.

"I truly believe the fans are going to love it also. It'll be so cool to see four Pro Mod cars ripping down zMax Dragway at the same time. When I'm not racing, I'll be watching, and I'll be wearing my Plugfones for protection."

Formally established in 2012, Innate Devices designs and distributes innovative audio products from its company headquarters in Springville, Utah. The revolutionary flagship product "Plugfones" combines earplugs and earbuds while providing ANSI-certified hearing protection with top-quality audio for our customers. With almost one million units sold, Plugfones has become the go-to source for anyone working, racing or enjoying life in loud environments who want the benefit of audio while protecting their hearing.

"In 2011, the idea for Plugfones was born under the lights during a night session of NHRA drag racing," said Plugfones founder Shaun Knudsen. "Now, thanks in large part to JEGS High Performance Parts, that dream has become a reality.

"We are very excited to embark on a partnership with JEGS to offer our 'Earplugs with Music' to the greater racing community. To go from fans in the stands, to having our product available through JEGS is the fulfillment of a dream."

The eighth annual NHRA Four-Wide Nationals will be the third of an expanded schedule of 12 Pro Mod races in the J&A Service Pro Mod Drag Racing Series.