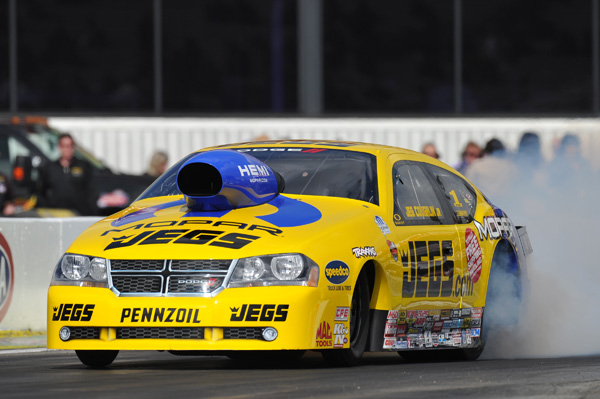 Coughlin won his fifth Pro Stock championship last November here, and after an off-season that included successful tests, Coughlin expected to pick up this season right where the team left off in 2013.

But Pomona, this time, was a bit of a hiccup to Coughlin and the JEGS team, as he bowed out in the second round.

"We made a lot of good runs testing in the off-season," Coughlin said. "I really felt like a lot of the stuff that proved in testing would work into the new season really well. Some of it did and some of it didn't. That's not uncommon."

Coughlin duplicated that elapsed time in the second round against No. 1 qualifier Vincent Nobile, but despite getting a slight advantage on the starting line, it wasn't enough to overcome Nobile's run of 6.534 seconds at 212.06 mph.

"The car was just not wanting to get going," Coughlin said, "and when we tried to get it going it wasn't real happy."

But Coughlin and his team, led by co-crew chiefs Mark Ingersoll and Adam Hornberger, learned plenty of lessons in Pomona and are ready to move on to Wild Horse Pass Motorsports Park in Phoenix for the next race Feb. 21-23.

"We already have a tentative game plan for Phoenix," Coughlin said. "My goal coming back after the round was to hear their thoughts on how we can get this cleaned up and get the car back to a competitive state. That's what everyone wants.

"This is a sport where there is no "I" in team. That couldn't be more true at any time. I support this group 110 percent through it all. At this point it just feels like a little hiccup. We will keep on trucking and get ready for Phoenix."