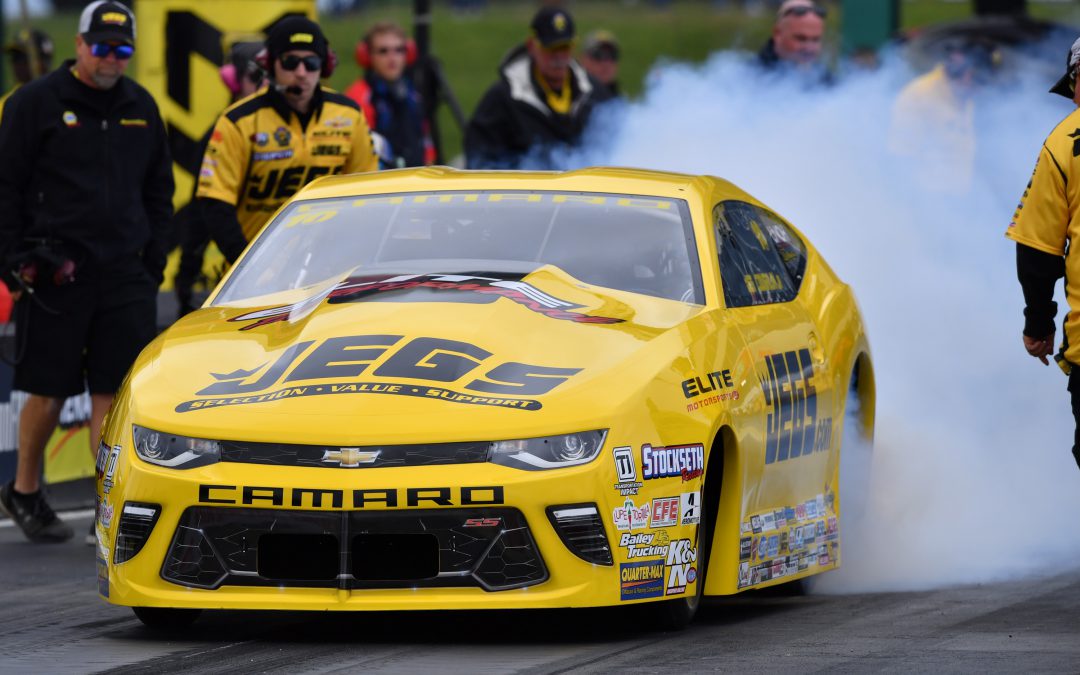 "We're pretty happy with the JEGS.com/Elite Performance Chevrolet Camaro," Coughlin said. "We got quicker each of the three sessions we were able to compete and I'm confident that if we hadn't lost a round to yesterday's rain, we would have posted an even better number. But we're all dealing with the same circumstances.

"The worst part of yesterday's rain was what the fans had to go through. God bless them all though because most of them stuck it out and we were super happy to give them at least one round last night. The good part of the weather was the much cooler and dryer conditions we had today. Throw that on top of an always good Topeka racetrack and you get fireworks every time."

"After watching it rain most of Friday we really wanted to at least make an end-to-end run and get some data," Coughlin said. "We knew Saturday had the potential to be really good so we ran the car down the track and posted that 6.61, which actually placed us second overall in the provisional field.

"As expected, the track was really tight today and we probably underestimated it a touch in Q2 with the 6.59. Mark (Ingersoll, tuner) and the guys went to work and we came back and ran the 6.56, that quite honestly still could have been a bit better. We feel really good about what we can do tomorrow."

Coughlin will open race day against Deric Kramer, who qualified 11th with a 6.622 at 207.98 mph. The two men raced only once this year with Coughlin taking the victory in Round 1 of the season-opening NHRA Winternationals in Pomona, Calif.

"It's supposed to be warmer tomorrow, a lot more like it was Friday, so I don't think we'll be running any quicker, but we are hoping for continued consistency," Coughlin said. "We feel like we have a great car with a team around us that's firing on all cylinders.

"Both of my teammates, Erica (Enders) and Vincent (Nobile) also ran well today so the crew chiefs have lots of data to look at to make us all better. It should be a great race."

Pro Stock eliminations start at noon, Sunday. Television coverage on FOX Sports 1 will begin with a live show starting at 1 p.m. (All times are local and subject to change).